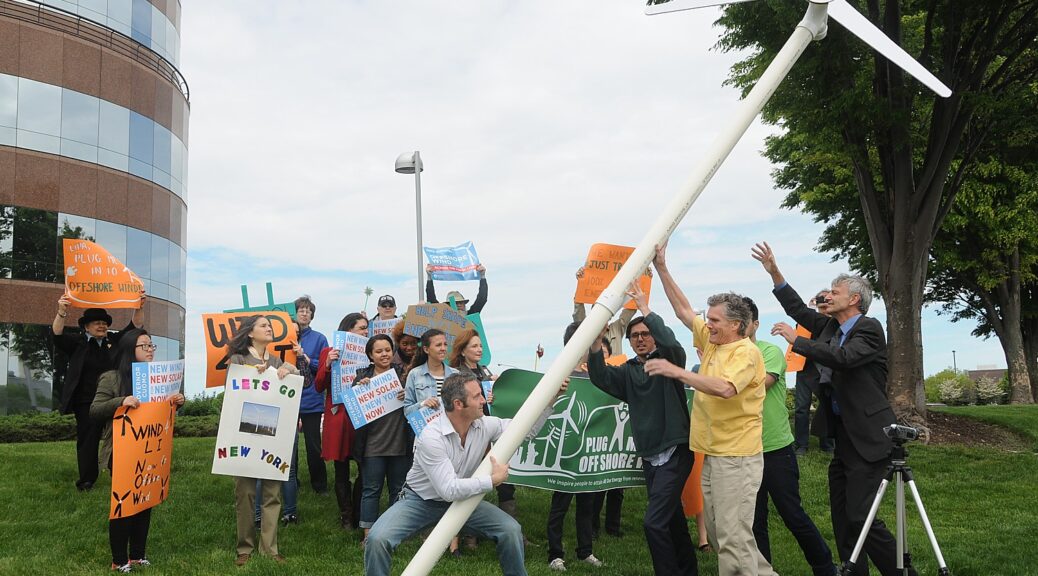 Republicans like Congressman Lee Zeldin, who is seeking to take over as Governor of New York, are still wedded to fossil fuels and determined if they regain control, to reverse course on efforts to transition to a clean renewable energy economy, society, and environment and stem the tide of climate change. This was clear when Zeldin chided President Joe Biden at a pro-Ukraine rally in Long Island for canceling the Keystone Pipeline, which he somehow suggested would have countered impact of sanctions against Nordstrom 2.

But even as Biden leads a global alliance to counter Putin’s criminal aggression against Ukraine, and makes a historic nomination of the first Black woman to the Supreme Court, makes historic investments in infrastructure to clean up the environment, develop the economy, promote competition and address supply chain issues, his administration is forging ahead with historic climate actions. In the latest, the administration reports setting records for offshore energy development with $4.37 billion in winning bids for wind sale.

Of course, the correct answer to reducing dependency on fossil fuel is what the Biden-Harris Administration is doing: transitioning to clean, renewable energy that can be generated in localities, so less vulnerable to geopolitics and cyberattacks.

This is from the Department of the Interior:

A recent report indicates that the United States’ growing offshore wind energy industry presents a $109 billion revenue opportunity to businesses in the supply chain over the next decade.

“This week’s offshore wind sale makes one thing clear: the enthusiasm for the clean energy economy is undeniable and it’s here to stay,” said Secretary Deb Haaland. “The investments we are seeing today will play an important role in delivering on the Biden-Harris administration’s commitment to tackle the climate crisis and create thousands of good-paying, union jobs across the nation.”

The provisional winners of today’s lease sale are:

A map of the lease areas auctioned today can be found on the BOEM website.

Before the leases are finalized, the Department of Justice and Federal Trade Commission will conduct an anti-competitiveness review of the auction, and the provisional winners will be required to pay the winning bids and provide financial assurance to Interior’s Bureau of Ocean Energy Management (BOEM).

The New York Bight offshore wind leases include innovative stipulations designed to promote the development of a robust domestic U.S. supply chain for offshore wind energy and enhance engagement with Tribes, the commercial fishing industry, other ocean users and underserved communities. The stipulations will also advance flexibility in transmission planning. Stipulations include incentives to source major components domestically – such as blades, turbines and foundations – and to enter into project labor agreements to ensure projects are union-built.

“We must have a robust and resilient domestic offshore wind supply chain to deliver good-paying, union jobs and the economic benefits to residents in the region,” said BOEM Director Amanda Lefton. “Because we understand the value of meaningful community engagement, we are requiring lessees to report their engagement activities to BOEM, specifically noting how they’re incorporating any feedback into their future plans.”

On Jan. 12, Secretary Haaland, New Jersey Governor Phil Murphy and New York Governor Kathy Hochul announced a shared vision for developing a robust offshore wind energy domestic supply chain that will deliver benefits to residents of New York and New Jersey and the surrounding region, including underserved communities. This collaboration will serve as a model for future engagement and establish the U.S. as a major player in the global offshore wind energy market.

To advance the Interior Department’s environmental justice and economic empowerment goals, lessees will be required to identify and make efforts to engage with Tribes, underserved communities, and other ocean users who could be affected by offshore wind energy development. The Department will hold companies accountable for improving their engagement, communication and transparency with these communities.

These additions are intended to promote offshore wind energy development in a way that coexists with other ocean uses and protects the ocean environment, while also securing our nation’s energy future for generations to come.
BOEM initially asked for information and nominations of commercial interest on 1.7 million acres in the New York Bight. Based on BOEM’s review of scientific data and extensive input from the commercial fishing industry, Tribes, partnering agencies, key stakeholders, and the public, BOEM reduced the acreage offered for lease by 72% to avoid conflicts with ocean users and minimize environmental impacts. BOEM will continue to engage with the public, ocean users, and key stakeholders as the process unfolds.

The Administration has already made significant progress toward creating a pipeline of projects. It has approved and celebrated the groundbreaking of the nation’s first two commercial-scale offshore wind projects in federal waters: the 800-megawatt Vineyard Wind project and the 130-megawatt South Fork Wind project. BOEM expects to review at least 16 plans to construct and operate commercial offshore wind energy facilities by 2025, which would represent more than 22 GW of clean energy for the nation.

In addition, this past fall Secretary Haaland announced a new leasing path forward, which identified up to seven potential lease sales by 2025, including the New York Bight and offshore the Carolinas and California later this year, to be followed by lease sales for the Central Atlantic, Gulf of Maine, the Gulf of Mexico, and offshore Oregon.

More information about today’s auction can be found on BOEM’s website.