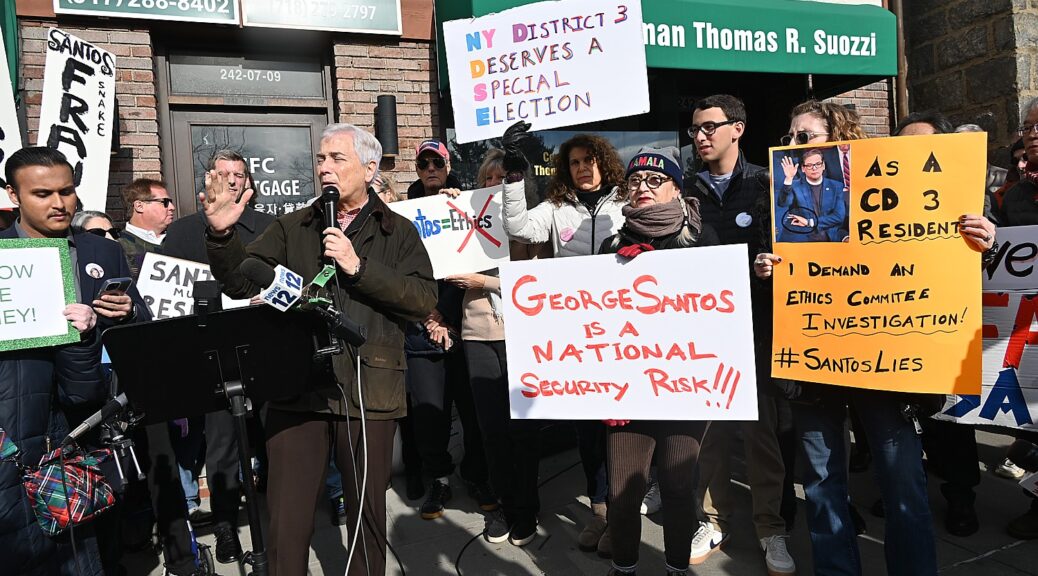 Just hours after George Santos was sworn in as a member of the house of Representatives, over 100 people gathered outside what he claims to be his office – actually former Congressman Tom Suozzi’s office – on Northern Boulevard in Queens, to demand he resign from Congress, an investigation by the house Ethics committee (the very one that the new speaker, Kevin McCarthy, said he would defund as a concession to the Sedition Caucus). They are calling on Santos to resign and for a special election to be held.

They spoke of having been betrayed, cheated, and more than that, that because Santos is effectively being frozen out of committees, even his own caucus, his constituents have effectively lost representation in Congress, access to federal funding and support. He runs from reporters, won’t answer questions or deal with representatives.

They raised concern that because of his shady finances (how the heck did a man who faced two evictions, reported a salary of $55,000 just two years ago, come to become a millionaire with a multi-million dollar business, and the ability to “loan” his own campaign $700,000, and pay out hundreds of thousands to other campaigns), Santos is a national security threat who cannot serve on any committee involving intelligence. They questioned who Santos is beholden to (at least one of his major donors is related to a sanctioned Russian oligarch), and whether he would be prime to sell secrets.

They raised concerns about undermining trust in government, altogether.

A photo of George Santos using a White Supremacy hand gesture as he raised his other hand to vote for McCarthy, was featured on the sign carried by Susan Naftol of Plainview, that was received as a middle finger to constituents of one of the most diverse districts in the country, and a sign that like Trump, Santos, who at one point said he was descended from refugees of the Holocaust and was “Jew-ish” as well as biracial, would embrace anyone who supported him, White Supremacists, Insurrectionists, included.

Ed Braunstein, State Assemblyman (District 26), and 3rd District resident, declared that when Santos was elected, it was his intention to work with him “for common good. That was before found out Santos was a pathological liar, a national laughingstock. There is no way to work with him, or refer constituents for help, or sign a letter with him, or work with nonprofits to seek funding from him. He is useless. Not effective locally or nationally. He is toxic in Congress – colleagues won’t sit with him. Nobody can work with him. He is compromising us being there. He should do the right thing and resign. Unfortunately, all indications are that is not his interest.

“A few days ago, while voting for Speaker, he flashed a White Power hand gesture. Queens County is the most diverse in the country – we celebrate ethnic, racial, religious diversity, and then, to look and see this clown flash the white power gesture – he is thumbing his nose at us, at his colleagues. It tarnishes the House as an institution. Every other House member should be horrified. Congress has power to open Ethics Investigation [except one of the concessions McCarthy made to get enough votes to become Speaker was to defund the committee].

“We demand Speaker McCarthy open an investigation, now. If Santos, allies think he can just bide his time and this will blow over, he is mistaken. We will protest, hound him until he gives us our seat back, Braunstein declared.

Robert Zimmerman, the Democratic candidate for Congress who Santos defeated, declared, “We are here as one to express our anger, frustration. We stand together united to demand Santos resign. We are sending a message to those members of Congress who don’t call on him to resign that they are accomplices. He is threat to national security.”

Veronica Lurvey, a Town of North Hempstead councilmember and the child of political refugees who escaped Soviet tyranny in Czechoslovakia in the 1960s, declared that The Soviet regime was a regime built on lies. Lies the government told the people, and lies that the people told each other. This lead to a weakening of the social fabric…a weakening of civil society….and the rise of massive corruption that is difficult to eradicate.

“Luckily my parents were able to flee the Soviet regime and got their start in Astoria, Queens. As a first generation American, born in the US – actually I was born in NYC, I have internalized the core American values of hard work, decency and honesty.

“Mr. Santos’ lies make a mockery of every one of us whose families came to this country to achieve the American dream. What’s more, Mr. Santos’ lies erode the trust that we have in our elected officials. To get anything done in government, you need to be able to negotiate, to speak with honesty. When deals fall apart because of lies, who would be stupid enough to try to enter a deal again? Honesty is the basis of any relationship and without honesty relationships fail. Mr. Santos, your relationship with the people of the 3rd Congressional district in NY has failed. You have been caught cheating. Cheating cannot be tolerated.

“I am here to say that for the sake of the soul of the American dream, for all the immigrants who came to the United States and worked around the clock like my parents did…I call for a full investigation by the House Ethics Committee into Mr. Santos and his background. We cannot let Santos’ lies and dishonesty erode the America that we love, the America that our families looked to as a beacon of hope. Cheaters must not be rewarded,” Lurvey declared.

The constituents are not just protesting and holding rallies, they are taking action.

A nonpartisan group, Concerned Citizens of NY Congressional District 3, has been formed, circulating petitions calling for Santos’ ouster and a free and fair special election to replace him. They are demanding the US Justice Department prosecute Santos for fraud, the House Ethics Committee to investigate, and local and national Republican leders to repudiate Santos and refuse to seat him.

“This is not partisan,” said the founder, Jody Kass Finkel. “both Democrat and Republican residents feel deceived by Santos’ lies. Recognizing that no one in Washington D.C. will believe anything Santos says, constituents of NY-03 are concerned that they will not have a voice in Congress and will be shut out of critical federal support and services.”

She supplied statements from numerous constituents registering their outrage, sense of betrayal.

“People didn’t have the truth about who this guy was. In my 30-plus years in the nonprofit world lobbying for environmental, health and affordable housing issues in Washington and Albany, I’ve never seen anyone with such an arrogant contempt for the truth or his constituents. While the whole country is aghast at Santos’ lies and utter disregard for decency, the residents of NY-03 have the most to lose,” Finkel declared.

“The Constitution provides for Americans to elect their representative. The representative we got lied, is unqualified, a fugitive conman, a grifter.”

“George Santos is sending the exact wrong message to young people across the country,” stated 18-year old activist and college student Aidan Davis. “If he isn’t held accountable, he demonstrates that our system deems it acceptable to lie about accomplishments, fabricate entire backgrounds and work histories, and generally be dishonest in order to get ahead. He must resign.”

Shari Markovich of Little Neck stated, “George Santos duped his constituents and was elected under false pretenses, fabricating his resume and blatantly lying about his background and credentials. This is criminal and we cannot allow this person to represent our district. There needs to be a new election.”

Casey Sabella, who organized the protest in coordination with up with Courage for America, offered a call to action for those inside and beyond the district to demand an investigation. She produced buttons with a QR code that leads to a letter online at www.whoisgeorgesantos.com. Wear button everywhere, talk to everyone, sign the letter. Continue to talk on social media, talk to everyone, write a letter to the editor. Make clear constituents won’t allow him to hide.”