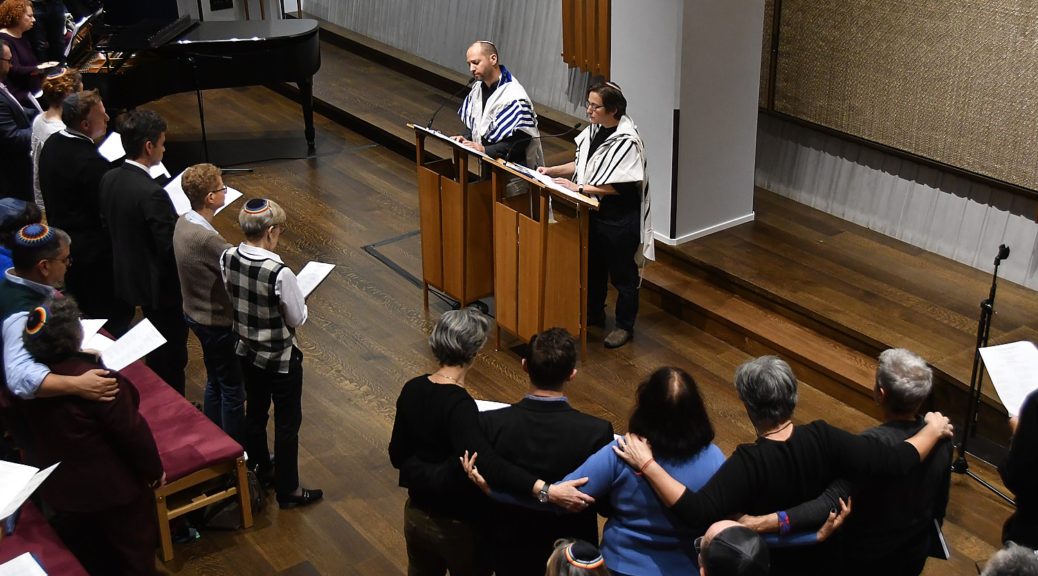 The reaction to the massacre at the Tree of Life Synagogue in Pittsburgh, the deadliest against the Jewish community in American history, Rabbi Sharon Kleinbaum told the Congregation Beit Simchat Torah in Manhattan, to be more Jewish, more visibility, not be (terrorized) into bunkers or invisibility.

Leading a communal shiva service, she said, “We will study, build community and not lose our focus as to what it is to be Jewish.”

New York State Lieutenant Governor Kathy Hochul, addressing a communal Shiva gathering for victims of the Tree of Life synagogue shooting in Pittsburgh said, “The word is resilience, a refusal to succumb to victimhood. That’s how we win out. Willingness to gather as a community …

“The shock, outrage, disbelief, overwhelming sadness and grief is overwhelming,” she said.

“How it happened? We don’t have political courage to ban weapons that allow such carnage.

“As to why? We know there is hatred, evil, but in t last two years, it has evolved… Evil lurking under surface, the serpents feeling they can rise up out from under rocks because leadership is willing to do the same. .. What was submerged is unleashed.

“What gives hope is the knowledge that no child is born anti-Semitic, homophobic, racist, misogynistic. [We must] capture hearts and minds of next generation before they learn hate.”

She advised, “Live a more publicly Jewish way, not be a victim, but embrace your heritage and embrace the ones not yet [tainted] by hate. Push [hate] back under a rock.

“On behalf of Governor Cuomo and 20 million New Yorkers, I express condolences to all of us because we are all heartbroken today.”

Rabbi Kleinbaum noted that the first response after the news of the massacre in Pittsburgh came via text and email from Muslim and Christian leaders in the city.

She said that since the inauguration, she and members of the synagogue have held a vigil at the nearby mosque every Friday, to stand up for Muslims who have been vilified by Trump.

“We say to ourselves what would it have been like in Berlin, in Vienna, if non-Jewish Germans and Austrians stood with their Jewish neighbors.

And now, the Iman has said his members would come to the synagogue this Friday before Shabbat services.

“We are in solidarity with our Jewish brothers and sisters,” he wrote. “Throughout the constant attacks and dehumanization from this administration, [Beit Simcha Torah] has been a source of faith and love. … Our duty is to stand with our Jewish brother and sisters. We stand with them, put our bodies on the line for their safety. … [We must] stamp out White Supremacy and anti-Semitism….Any attack on your community is an attack on ours.”

Rabbi Kleinman said, “We can replace hate in the world, the violence, with love.”

She noted that the attack on Tree of Life Synagogue in Pittsburgh was not only an act of anti-Semitism, but because the synagogue supported refugees to the US.

“Abraham was told to leave his home, go to a place he did not know and build and live there.

HIAS – Hebrew Immigrant Aid Society – provided finances to help Jews, and today, HIAS helps non-Jews become part of the American tapestry, “because we are Jews, we welcome the stranger, the immigrant,” she said.

“God forbid this act of violence deters us from that, puts us into bunkers. That’s what the terrorists, anti-Semities want…. We must respond to anti-Semitism with deepened strength of Jewish identity. We must not let fear, despair control us.

At the end of the service, members of the synagogue’s board read the names and something personal about each of the 11 victims at Tree of Life Synagogue, murdered for no other reason than being Jewish. Most notably, was the personal remembrance of Dr. Jerry Rabinowitz, 66 years old, who was one of the first to treat people with HIV. The gentleman had grown up in Pittsburgh and was treated by Dr. Jerry Rabinowitz, until he left Pittsburgh in 2004. “He was the one to go to. He was known in the community for keeping us alive the longest. He held us without gloves. You will be remembered by me always. You are one of my heroes.”

It is also notable that the first to treat the assassin at the hospital were Jewish, including a doctor who was a congregant at Tree of Life.

“Before the immigration laws, a young boy whose mother couldn’t speak English, came with no money, worked very hard cleaning other people’s homes and would tell him, ‘God bless America,’ not because it was perfect but it was better than the place she fled. The son grew up in New York City, became one of the greatest songwriters. Irving Berlin wrote “God Bless America,” not as a militaristic, triumphant chant. He wrote it as a prayer. He wrote it understanding her dream, coming to this country without skills, language or money, for her son to grow up away from a land that hated Jews. God Bless America. We won’t give up. And remember to vote. Sing it, as a prayer.”

And the congregation sang.

Founded in 1973, Congregation Beit Simchat Torah (CBST) is a progressive synagogue that attracts and welcomes gay men, lesbians, bisexuals, transgender, ‎queer and straight, individuals and families who share common values. Hochul had participated in the opening of the building in 2016.