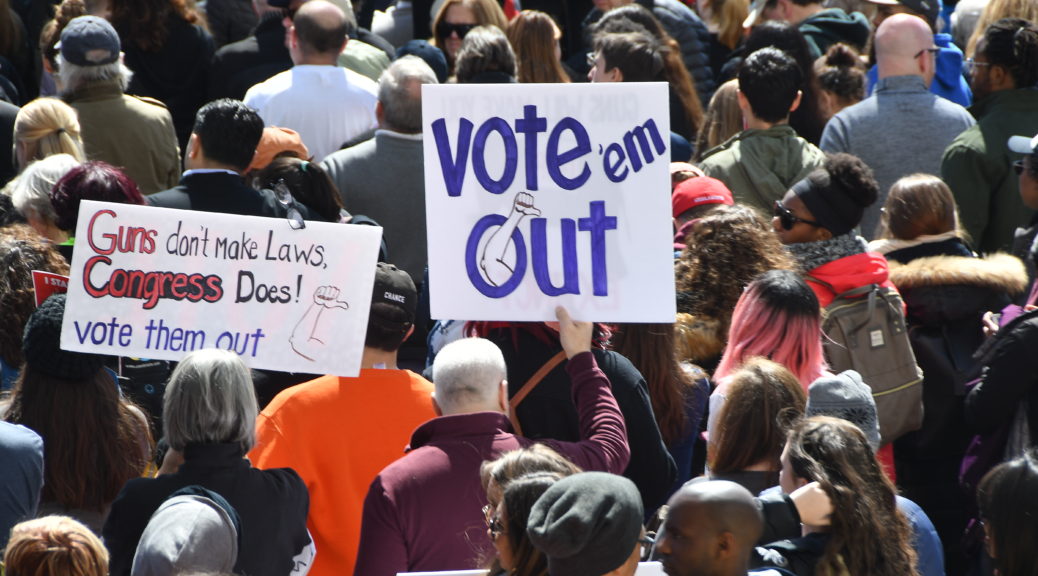 It doesn’t matter that Donald Trump and the NRA-toadies in the Congress had all skipped town ahead of the onslaught of an estimated 500,000 who joined the March for Our Lives in Washington DC calling for sane gun control. After Sandy Hook, Pulse Nightclub, Las Vegas, and the five school shootings that took place just since Parkland, the advocates for commonsense gun regulation are done trying to appeal and cajole lawmakers. The overriding theme of the event, called out in every interlude between the teen and t’ween speakers who so eloquently made the argument for banning assault weapons and high-capacity ammo clips and universal background checks was “VOTE THEM OUT.”

The call would come from down a mile-long stretch of Pennsylvania Avenue, and crescendo, until the buildings would shake.

Gun control advocates are done expecting tragedy to prompt action to protect public health and safety. They are done asking. They are demanding change – whether it be the policy or the politician.

“Either represent the people or get out … Stand for us or beware: The voters are coming,” was the manifesto from Parkland student Cameron Kasky to lawmakers. “To the leaders, skeptics and cynics who told us to sit down, stay silent and wait your turn: Welcome to the revolution.”

The NRA has succeeded, despite easily 90% of Americans who want sensible gun regulations – keeping guns out of the hands of domestic abusers, the severely mentally ill, felons and terrorists, and want to keep weapons designed for war off city streets where 80 percent of Americans live – because they 1) buy politicians, but 2) because they manage to shepherd single-issue voters, fear-mongering the call for “sensible” gun regulation into “confiscate your guns” – and there are some 350 million of them in the hands of just 22% of the population (3% of gun owners own 50% of guns).

Now, the single-issue voters will be gun regulation. That will be the litmus test for support or opposition to a candidate. And that’s okay, because it seems that those who embrace sensible gun laws tend also to support climate action, women’s rights, justice, health care and education. They tend to support diplomacy over war. They see gun control as a public health issue – an epidemic of lethal violence that must be addressed – and so also favor the other issues that support health and quality of life, or in the words of the Founding Fathers quoted on the stage: “life, liberty and the pursuit of happiness.”

And there will be 3.9 million high school seniors who will be eligible to vote, if not in the 2018 midterms, buy the 2020 presidential.

An army of volunteers were out with forms to register new voters here and in the hundreds and hundreds of “sibling” rallies held across the country – more than 800 in all including those that took place globally. (Several nations have issued advisories against traveling to the United States because of gun violence.)

This was quite literally a March for Our Lives. More children have been killed by gun violence in the five years since Sandy Hook than soldiers have died in combat since 9/11, reported Newsweek. According to Everytown, on average, there are 13,000 gun-related homicides a year (another 20,000 suicides); for every one person killed by a gun, two more are injured; seven children and teens are killed with guns every day. In 2015, Politifact confirmed a statement by Nicholas Kristof that “”More Americans have died from guns in the United States since 1968 [1,516,863] than on battlefields of all the wars in American history [1,396,733].”

There have been 5 school shootings just since Parkland on February 14 – including the murder just two days before the March for Our Lives  of 16-year old Jaelynn Willey at Great Mills High School in Maryland, at the hand of a 17-year old former boyfriend, wielding his parents’ semi-automatic handgun.

It wasn’t just Parkland or Sandy Hook and school shootings represented. The speakers were representative of the spectrum of gun violence that is epidemic in America and no where else in the world: gang violence that steals so many lives in urban center cities like Los Angeles and Chicago, that snuffs out the souls in church, concerts, movies, shopping malls; the victims of domestic violence and robbery. And assassination, as the remarks of Martin Luther King Jr.’s 9-year old granddaughter, Yolanda Renee King, recalled.

“My grandfather had a dream that his four little children will not be judged by the color of their skin, but by the content of their character,” said Yolanda Renee King. “I have a dream that enough is enough,” she said. “And that this should be a gun-free world – period.”

Then there was 11-year old Naomi Wadler from Alexandria, Virginia, who led the walk-out from her school for 18 minutes – 17 to honor those killed in Parkland and 1 more for the girl who was murdered from her school. “I am here today to acknowledge and represent the African American girls whose stories don’t make the front page of every national newspaper. Whose stories don’t lead on the evening news. I represent the African American women who are victims of gun violence, who are simply statistics instead of vibrant, beautiful girls full of potential,” she said. “For far too long, these names, these black girls and women, have been just numbers. I’m here to say ‘Never Again’ for those girls, too.”

On average, gun violence kills 96 people each day, who don’t warrant media notice. American women are 16 times more likely to be shot to death than women in other developed countries; When a gun is present in a domestic violence situation, the woman is 5 times as likely to be murdered. But in states where a background check is required for every handgun sale, 47% fewer women are shot to death by intimate partners, according to EverytownResearch.org.

The speakers, an extraordinary array of the most extraordinary young people, described  their trauma, their loss of siblings, parents, best friends, the constant anxiety they must now live with (187,000 school children today have been witness to gun attacks in their schools, according to a Washington Post study; an entire generation since the 1999 Columbine massacre lives with Live Fire drills just as the 1960s kids drilled for nuclear bomb attacks; 40% of Americans know someone who has been a victim of gun violence). They made their case with such clarity, poise, reason and most of all, authenticity, you had to contrast that with the absurdity and stupidity that is heard from many of the current electeds, like Texas Congressman Louie Gohmert.

When Emma Gonzalez, with her poignant, piercing 6 minutes and 20 seconds of silence that mimicked the time it took for the Parkland School Shooter to kill 17, injure 17 more with his AR-15 assault rifle and simply disappear amid the fleeing students, you had the feeling of seeing a future leader, much as those who heard Hillary Clinton’s Wellesley commencement speech. And so many more on that stage. And then there was Malala, in her taped message, who defied the terror attack on her by Taliban determined to prevent girls from attending school.

But more: you realized in a flash what was lost – to society, to civilization – the potential of what these young people could have been, their lives snuffed out by the dreck of our species. Did we lose a Steve Hawking, a Malala, an Obama, a Steve Jobs, a Bill Gates? And what of the hundreds of thousands who must live with life-altering injuries – what of the cost to society of their lost ability to fulfill their potential, of the cost of health care that might otherwise have been spent on education, professional training, investment in innovation? The high cost of trauma counselors after an event, of security officers, technology and construction to harden schools against gun violence (diverting scarce funds from computers and actual teaching), pales in comparison.

These Parkland survivor-leaders weren’t trying to appeal to politicians with reason or emotion, authenticity or compassion, as the Sandy Hook parents had futilely done. They are done with that.

The pacing of the production – mixing personal stories with PSA’s and data – even the NRA’s “greatest hits” – and top-notch entertainment that included Lin-Manuel Miranda and Ben Platt ; Miley Cyrus; Ariana Grande; Jennifer Hudson; Andra Day with Cardinal Shehan School Choir;  Common with Andra Day; Demi Lovato; Vic Mensa and an astonishing performance by the Stoneman Douglas drama club with a student choir of the song they wrote, “Shine”  (www.youtube.com/watch?v=MrZiB2jV7dw), was as fast and explosive as an AR-15 firing. The audience filled in the interlude with chants of “Vote Them Out” – except after Emma Gonzalez spoke, when the chant was “Vote Her In.”

Enough is Enough, the speakers declared. Never Again, was the reply back, perhaps more hopefully, given that there are still more than 200 days before the midterm elections, and 250 days before a new Congress is seated. How many more will die until then? If the law of averages continues, 96 a day, or upwards of 24,000 lives will be snuffed out in this gun violence epidemic, with thousands of more suffering life-altering injuries, that sap their ability to fulfill their god-given potential.

“We’re done hiding, being afraid,” Ryan Deitsch, a survivor of Marjory Stoneman Douglas High School shooting, declared. “That’s not what our Founding Fathers envisioned when they wrote of ‘life, liberty and the pursuit of happiness.’ This is the beginning of the end. This is the fight for our lives.

“REV up America: Register to vote. Then educate. Then vote.”

About a million people attending more than 800 rallies across the country and around the world, were inspired to take action. And vote.

Here are more photo highlights of the March for Our Lives in Washington DC: