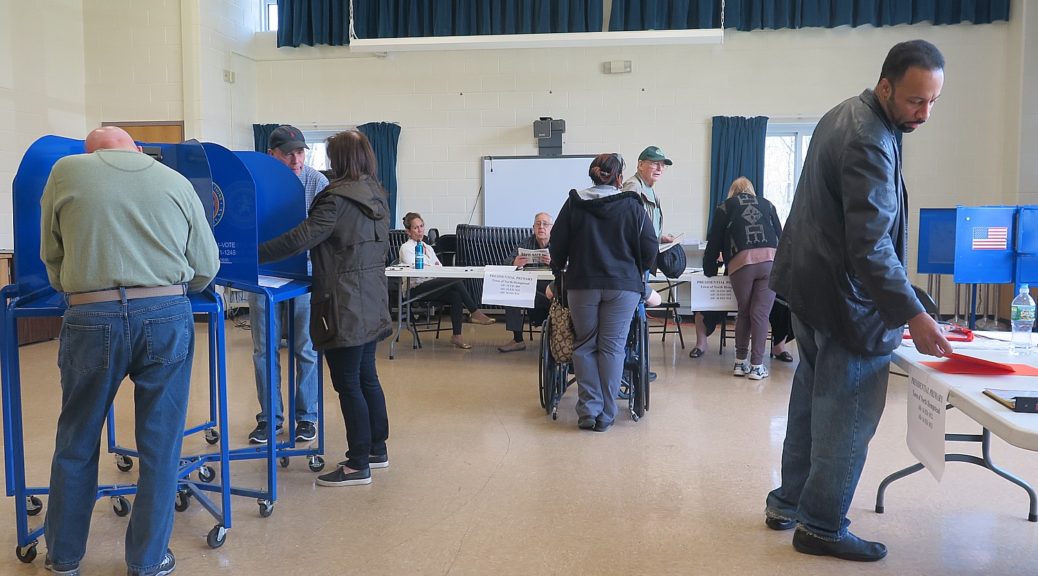 While everyone was obsessing over the latest Trump twitter outrage, his administration was moving forward with the latest assault on democracy and American rights. His Orwellian-named  “Presidential Advisory Committee on Election Integrity“  (which is anything but), otherwise known as the Voter Fraud Commission, sent out a letter signed by Kris Kobach to every state’s election official “requesting” (since the commission has no real authority or power) their entire voter database, including party registration, a decade’s worth of voter history, address, partial social security number, birthdate, military service and felony convictions, and whether  the voter is registered in more than one state.

Indeed, Secretaries of State, be they red, blue, purple or green, are horrified at the notion of transmitting this information, which, contrary to Kobach’s claim, is not “public.” Moreover, there are “protected classes” such as victims of domestic violence, whose private information is shielded. Louisiana told the commission to “jump in the Gulf”; Kentucky’s said “there isn’t enough bourbon” that would make her deliver this information.

But Kobach’s “request” sounds less like an effort to find out whether our elections are honest and fair, versus a data mining operation for Trump and the Republicans so that they can expand upon their tactics of the 2016 campaign – focusing on fake news, social media trolling in pinpointed districts where just a small nudge could tilt the balance in their favor- which is why a mere 70,000 votes across three states trumped a loss of 3 million popular votes for Hillary Clinton nationally.

That is what is at the heart of the Russia collusion investigation – and what Kobach and his commission, if he is really interested in “election integrity” should be examining, but clearly they are not, because Trump was the beneficiary and because it contradicts his claim of a “mandate” to unleash his ultra-rightwing agenda.

And what if they find that there are 5 million or even 10 million people who have registered in more than one place – like Ivanka Trump and Steve Bannon – or that there are 1 million “dead people” still on the rolls? Unless they voted twice or if a dead person sent in an absentee ballot, they did not alter the result.

What is more, Kobach is demanding this data be sent over unsecured email servers, an engraved invitation from this inept administration for malevolence, when even government agencies as secure and cyber-sophisticated as the NSA, Pentagon, Office of Personnel Management, the Secretary of State’s office, indeed the election rolls of 39 states, have been hacked.

The cyberattacks are getting more and more dangerous, moving closer and closer to infrastructure – like shutting down utility plants, the power grid, air traffic control, rail switching stations, and yes, voting  databases and machinery. Putin’s goal was to foster suspicion in the democratic process – and he succeeded beyond his wildest imagination, helped by candidate Trump’s constant claims of a “rigged election” and urging his minions to strongarm their way into polling places to make sure that “those people” don’t vote (which had the strategic effect of preventing Democrats to scream “foul” afterward, since they had already made pronouncements that the elections were fair).

The states’ election machinery – made worse after the “Help America Vote Act” that followed the 2000 pregnant chads controversy – is woefully inadequate, and was even in 2004 when Walden “Wally” O’Dell, CEO of Diebold, the black box manufacturer promised to deliver Ohio to George W. Bush, and he did (see story)– and if the NSA, Pentagon, banks, utilities could all be hacked, why would elections not be?

The argument here is that elections are so decentralized, the results could not be altered sufficiently. In the first place the weak link is where the various election districts electronically send their results to a single center for tabulation. And the 70,000 versus 3 million vote tally which gave Trump the White House is proof enough that the argument that decentralization is what protects the sanctity of the democratic process is specious. (See: Russian hackers’ election goal may have been swing-state voter rolls; Russian Hacking on Election More Widespread Than Reported; Election Hackers Altered Voter Rolls, Stole Private Data, Officials Say)

There is something wrong in America with voter turnout rates of 60% in the presidential election (higher than 2012, as it turns out, but less than the 62.2% that turned out in 2008) as controversial and consequential as 2016. (And how much of that was voter suppression or outdated voting lists?)

States that made it easier to register to vote had higher turnout – such as Oregon, Connecticut, Alaska, Vermont and West Virginia, where eligible citizens who interact with the Department of Motor Vehicles are automatically registered to vote. Similar laws are taking effect in California and Colorado. No wonder Republicans will use the commission to find an excuse to roll back the National Voter Registration Act of 1993, known as the motor-voter law, which has registered millions of voters, as Richard Hasen writes in Slate, Trump’s Voter Fraud Endgame.

In Oregon, automatic voter registration added an extra 225,000 people to the rolls; in Wisconsin, which Trump “won” by a mere 25,000, voter suppression tactics reduced turnout by 200,000.

Kobach’s “election integrity” commission is about voter intimidation, on top of the voter suppression tactics that Republicans have put through in the states they control, because Republicans realized long ago that low turnout favors their candidates. The problem isn’t over voting, it is under-voting – and this is exactly how the data that Kobach is mining could be weaponized. There are already enumerable examples of Republicans committing election fraud.

Instead of the non-existent voter fraud issue – 44 instances out of more than 1 billion votes cast between 2000-2012, a rate of 0.0000044% – there needs to be reforms made to voting, which though a function the constitution leaves to the states, should still include federal minimal standards for access to voter registration and polling places (to satisfy the 14th Amendment providing for Equal Protection as well as the 15thAmendment, the right to vote shall not be denied or abridged)  – where located, people served, hours of opening, minimal number of voting machines per voters, provisions for early voting and absentee voting; requirements for security for electronic, black-box voting devices, back-up paper ballots and auditing after each election, as well as requirements for mandatory hand recounts if the margin is 1% or less; a requirement that when a person is “purged” from voting rolls, a letter be sent informing them, with a remedy for correcting the record; making tampering with voter registration, rolls or elections, including giving fraudulent information about voting places, hours, accessibility a felony crime; and yes, a provision for nullifying an election which has been demonstrated to have been substantively tampered with.

Also,  a reason why young people do not vote in the numbers they should: they are too fearful of breaking a law if they vote absentee in their home districts after having moved to a new place for a job. And moved. And moved again. There needs to be clarification of rules allowing people to vote where they were last registered, or regularly vote, and provisions that require people who have not voted in a district for, say, 10 consecutive years, to reregister or be removed.

On this July 4th, even Trump supporters should be standing up for the basic principle of a government established for and by its people. Which means promoting voting, not suppressing it.