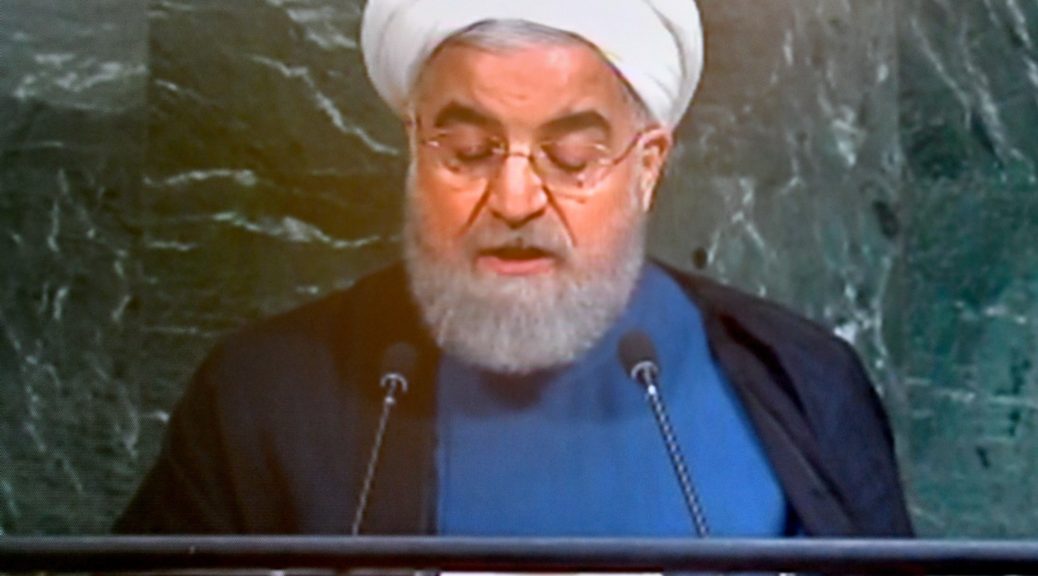 A day after the President of the United States characterized the Joint Comprehensive Plan of Action that froze Iran’s nuclear weapons program as an “embarrassment” to the United States in an address to the Assembly, President Hassan Rouhani of Iran came back with a vigorous, if the more statesmanlike reply, saying it would be a pity if that agreement was destroyed by “rogue newcomers to the world of politics”.  Iran would not be the first country to violate the Joint Comprehensive Plan of Action, he declared, adding that his country would nevertheless “respond decisively and resolutely to its violation by any party” but violating the commitments would destroy the credibility and undermine international confidence in any agreement the United States made.

“I declare before you that the Islamic Republic of Iran will not be the first country to violate the agreement,” he stated, “but it will respond decisively and resolutely to its violation by any party. It will be a great pity if this agreement were to be destroyed by ‘rogue’ newcomers to the world of politics: the world will have lost a great opportunity. But such unfortunate behavior will never impede Iran’s course of progress and advancement. By violating its international commitments, the new US administration only destroys its own credibility and undermines international confidence in negotiating with it, or accepting its word or promise.”

He continued, “The ignorant, absurd and hateful rhetoric, filled with ridiculously baseless allegations, that was uttered before this august body yesterday, was not only unfit to be heard at the United Nations – which was established to promote peace and respect between nations – but indeed contradicted the demands of our nations from this world body to bring governments together to combat war and terror.”

“We were not deceived, nor did we cheat or deceive anyone,” he said, adding that the Joint Comprehensive Plan of Action could become a model for global interactions based on mutual constructive engagement.

US President Donald Trump said that he would reveal his decision on whether to recertify Iran’s compliance with the nuclear agreement next week.

In a statement that basically follows Trump’s own “sovereignty” doctrine, Rouhani declared, ”I wish to underscore here that the defense capabilities of the Islamic Republic of Iran, including our missiles, are solely defensive deterrents for the maintenance of regional peace and stability and the prevention of adventurist tendencies of irrational aspirants. We cannot forget that civilians in many of our cities became the targets of long-range missile attacks by Sad dam Hussein during his 8-year war of aggression against us. We will never allow our people to become victims of such catastrophic delusions again.”

He charged, “Instability and extremist violence have only been ex-acerbated in our region through the military interventions of extra-regional actors-the same powers that try to sell ever more of their deadly weapons to other states by accusing Iran of fomenting instability. I want to emphasize that foreign intervention and the imposition of alien wishes on the people of the region will only widen and deepen the crises in our region. The crises in Syria, Yemen and Bahrain do not have military solutions and can only be resolved through cessation of hostilities, and the acceptance of the will and wishes of the populaces.

“The Iranian nation is resolutely determined to build a free and advanced Iran and participate in the development of a secure and stable region based on ethics and respect for international law. In this endeavor, we welcome the participation and cooperation of all investors, intellectuals and innovators from across the globe. From this global podium, and as the representative of the people of Iran – who are world-famous for their hospitality – I invite all those who seek peace, security and progress through partnership and cooperation among nations to visit Iran and join us in building this future of hope.

“If we truly believe in our collective decision four years ago here in this General Assembly to make a WAVE – a World Against Violence and Extremism – we can turn the discourse of imposition, unilateralism, intimidation and war into the logic of dialogue, synergy and peace so that moderation can become the dominant voice across the globe.”

© 2017 News & Photo Features Syndicate, a division of Workstyles, Inc. All rights reserved. For editorial feature and photo information, go to www.news-photos-features.com, email [email protected]. Blogging at www.dailykos.com/blogs/NewsPhotosFeatures.  ‘Like’ us on facebook.com/NewsPhotoFeatures, Tweet @KarenBRubin