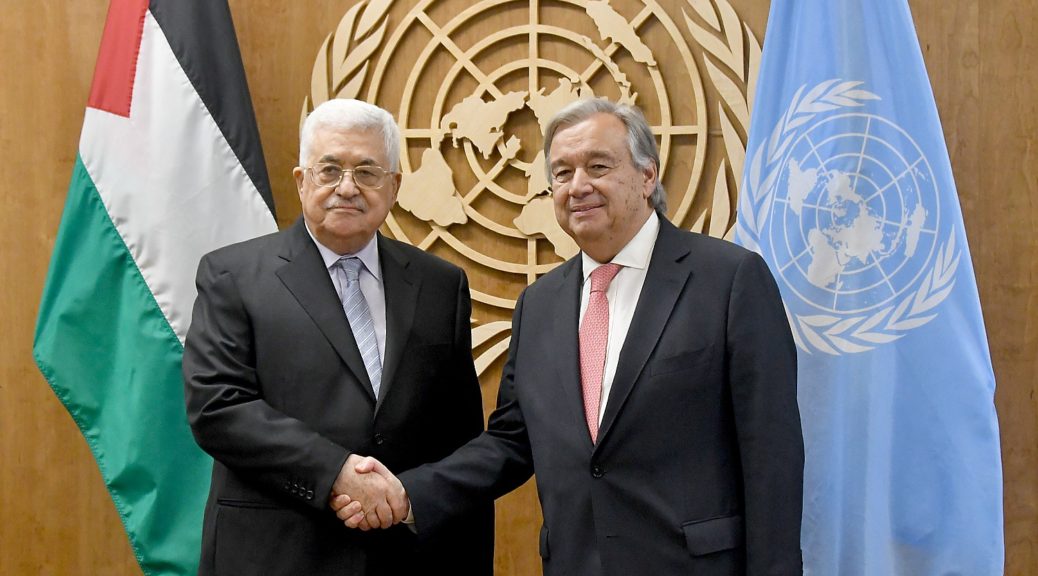 In his speech to the 72nd United Nations General Assembly, Sept. 20, Mahmoud Abbas, president of the state of Palestine, railed against Israel, the United Nations, Great Britain and every nation that has commerce with Israel, and demonstrated why the Israel-Palestine issue is intractable. His notion of a two-state solution is for Israel, which beat back an invasion in 1967 intended to annihilate the Jewish state, to return to 1967 borders which means splitting Jerusalem which he wants as his capital and leaving Israel with undefendible borders, and allow the right of return for Palestinians who long ago left – which would demographically overrun Israel. These are the same sticking points that have prevented the solution for decades since Israel has agreed to swap land for peace – as when they completely exited the Gaza Strip, only to have thousands of rockets rained down on Israeli communities.

Abbas gave a hard-line speech, stating that 24 years had passed since the signing of the Oslo Accords, an interim agreement that set a five-year period for ending the Israeli occupation.  Today, he asked what was left of that hope.  Israel continued to pursue its settlements, breaching all international conventions and resolutions on the question of Palestine.  The United Nations bore a legal, moral and humanitarian obligation to end the occupation and enable Palestinians to live in freedom in their independent State, with East Jerusalem as its capital along the 4 June 1967 borders.  Doing so would deprive terrorist groups of a rallying cry that they exploited to promote their repugnant ideas.

He pressed Great Britain “to rectify the grave injustice inflicted on Palestinian people when issued Balfour Declaration, promising Jews a national homeland in Palestine – despite the fact that it was inhabited … … 97% of population were Palestinians…The British have not taken any steps to correct this historical injustice against our people – should apologize and provide us with compensation and recognize the state of Palestine.  Even worse, in November they want to celebrate the hundredth anniversary of this crime against our people – the silence from the international community as to the aggression of the Israel government has emboldened Israel – I remind you that Israel violated international resolutions since its establishment….”

“The two-State solution is today in jeopardy,” he said.  Palestine had called on the International Criminal Court to open an investigation and prosecute Israeli officials involved in settlement activities, and would continue to pursue its accession to international conventions, protocols and organizations.  Palestine had upheld its responsibilities towards its people in the Gaza Strip, repeatedly affirming that “Gaza will not be the Palestinian State” and that “there can be no Palestinian State without Gaza”.  He expressed gratitude for the agreement reached in Cairo aimed at nullifying measures taken by Hamas following division of the area and formation of a government.

To save the two-State solution, he urged the United Nations to help end the Israeli occupation within a set timeframe and implement the Arab Peace Initiative.  It should work to end all settlement activities in the Occupied Palestinian Territory, including East Jerusalem; ensure international protection of the land and people of the State of Palestine in line with resolutions 605 (1987), 672 (1990), 673 (1990) and 904 (1994); and demand that Israel commit to the 1967 borders as the basis for the two-State solution.  He similarly urged Member States that recognized Israel to proclaim that their recognition was based on the 1967 borders, and thus align themselves with international resolutions.

States should also end their involvement and support to the illegal Israeli colonial regime in the occupied State of Palestine, he said, pressing those that had not yet recognized the State of Palestine to do so, in fulfillment of the principle of equality.  For its part, the Security Council should approve the State of Palestine’s application for full United Nations membership, while the broader international community should continue providing economic and financial support to Palestinians to achieve self-reliance, as well as support the United Nations Relief and Works Agency for Palestine Refugees in the Near East (UNRWA).

Later, before a bilateral meeting with United States President Donald Trump, Abbas said this meeting “attests to your seriousness” to “achieve the deal of the century,” during this year or in the coming months. And we are very certain that “you Mr President are determined” to bring peace in the Middle East. And “this gives us the assurance and the confidence that we are on the verge of real peace” between the Palestinian and the Israelis, he said.

“We have met with our brave and active delegation” more than 20 times after January 20, Abbas said. “This is an indication of how serious you are” about peace in the Middle East.

“You will find utmost seriousness on our part to achieve peace,” President Abbas said because it is in the interest of Israel and Palestine.

“We can coexist peacefully together,” the President said. “Once again Mr. President, we count on you.”

“We are fighting very hard, we are trying very hard” to achieve this peace. “If we do it, it would be a great great legacy for everybody,” Trump said.