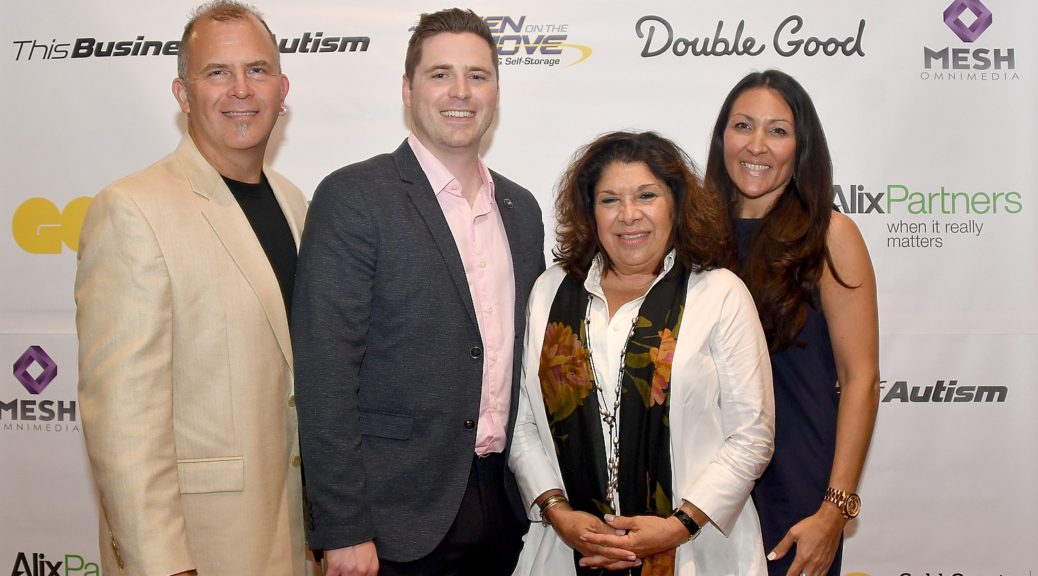 It is an amazing experience to sit in a movie theater watching the world premiere of a documentary in the small village on Long Island where it was filmed with the people it was filmed about. “This Business of Autism” is more than a profile of a social enterprise built around providing jobs for adults on the autism spectrum, it provides a manual, a template to how such businesses could be replicated and even more significantly, why they should be replicated.

The documentary leaps from Port Washington where Spectrum Designs, a social enterprise company founded in 2011 to employ adults on the autism spectrum, has just opened new, expanded offices, tripling the scale of its production (the documentary spends a considerable amount of time showing the building process and the fundraising to convert an office building into its plant). It travels to San Francisco to peek in on a Jobs Club that has focused on the need to train managers and mentors in companies that want to increase job opportunities for people with special needs, to Mercyhurst College in Erie, Pennsylvania, which has created an entire program that goes beyond the work skills to the life skills that are needed for the real world, and devotes a considerable amount of time to the wisdom of Dr. Temple Grandhin, who is herself on the autism spectrum, and lays out in no uncertain terms the need to instill self-sufficiency to the extent possible as early as possible.

The opening sets out the issue with jarring statistics: 1 in 59 children in the US is born with autism. Each year, 50,000 teens with autism age out of school-based services; an estimated 70- 90% of autistic adults are unemployed, under-engaged and leaving lives of isolation; 84% of these adults live with their parents, who have the constant fear of what will happen to their children after they pass away.

Autism is a lifelong neurological disorder affecting the way a person communicates, socializes and engages with the world. Though there is no cure, behavioral therapy can transform lives, and the earlier services are provided, the better. The highest functioning individuals on the autism spectrum are employed by the likes of NASA and Silicon Valley, but the vast majority – the 60 percent in the middle – have few employment opportunities.

It is fascinating to be brought into the homes of the parents of SpectrumDesign’s employees – starting with the founders of Spectrum Designs Foundation and Nicholas Center, Stella Spanakos and Nicole Sugrue, whose sons are autistic, lived with the daily panic of how their children will be able to fare in the world. Stella, after suddenly losing her husband, resolved to take the bull by the horns. She teamed up with Nicole, whose son was at the same summer camp as Stella’s. They decided to start a business that could employ special needs adults. Nicole googled “recession-proof businesses” and came up with t-shirt printing. They brought in Patrick Bardsley, who as an 18-year old had come from England to be a counselor at the summer camp and as fate would have it, became the one-on-one for Stella’s son; as Stella tells it, he was able to bring out the joy and happiness in her son, who was non-verbal and would act out, such as she had never seen from her son.

It turns out that t-shirt printing was a fortuitous choice because the tasks can be are defined, with a beginning, middle and end, can be easily taught, and are well suited to individuals who are in that 60% range on the spectrum.

They had the advantage of building a business around this social purpose, rather than insert employees with special needs into an existing business. And we get some insights into that: the visual cues are key, like the giant chart that tells everybody their tasks for the day with words and pictures; the lists of steps at each work station; naming the various machines and areas (one is named Octopus). Also, there is a one-to-three ratio of “educators” to workers.

What else is necessary? All the back-ups and supports, starting with the Nicolas Center, which helps counsel the young people and screen them for jobs and training.

I ask about the noise and stimuli of production that might trigger bad reactions, and am told that there are quiet spaces, a break room, and the enterprise, which actually has three components (custom printing, Spectrum Bakes which makes snacks custom packaged for gifts, and Spectrum Suds, a boutique laundry service), has quiet areas and activities. People are not employed in the print production area if they cannot deal with the noise and activity.

Training is a huge component. Workers are not slotted into a single repetitive task as on an assembly line (the image of Charlie Chaplin’s “City Lights” comes to mind), but rather undertake various parts of the process, indeed, every day there are different projects and jobs to undertake necessitating training for different tasks.

And that is a key issue: as Nicole noted, this is a business, albeit one that is based on social enterprise. Clients (who have included Northwell Health, KPMG, Google, Facebook, Accenture, NYU Langone Health and Mount Sinai) do not hire Spectrum Designs for their customized printing solely out of altruism but to get a quality product back. This isn’t an enterprise for a shop class in a high school, though certainly, high schools should undertake more of the skills training that people will likely need as adults. Indeed, the business has been growing at a rate of 80% a year, and from $100,000.in sales in 2012, to a projected $1.1 million in 2016, and targeting $3 million by 2020, in their expanded (tripled) space.

On the other hand, as the film demonstrates, the Spectrum Designs experience is replicable – I can even see them franchising in the way Sir Speedy does, since they have all the elements down: the machinery needed, equipment and product costs, construction costs and issues of building architecture that are pertinent, the revenue projections, and most significantly, the hiring, training, counseling aspects.

But while this not-for-profit has developed a sustainable business model, it also requires the support of community – that is the village of Port Washington, the Town of North Hempstead, and the state. The funding to build the business – purchase the machinery and the building- had to come from somewhere; the funding to counsel and train comes from somewhere.

Indeed, as the film also points out, the return on investment in developing self-sufficient individuals for society, the community and government is enormous, compared to government spending that goes merely to warehouse individuals.

The cost of autism across a lifetime averages $1.4 million to $2.4 million. These costs, which increase with intellectual disability, place a tremendous burden on families and society, but can be dramatically reduced with high-quality interventions and adult transition support.

Jack Martins, the former State Senator (a Republican) remarks in the film, “This is an appropriate role for government.”

And the genuine feeling of self-worth, of accomplishment in bringing home a paycheck is, well, priceless. There is a lot to be said for quality of life and not merely existing.

The interviews with the parents make clear how they struggled: they consider their children “the first generation”, when autism was just beginning to be diagnosed,and too many were diagnosed late or had to fight to get appropriate services (40 states now mandate now require health coverage for behavioral health treatment). As one parent notes, it is vital to receive appropriate services as young as possible because it makes a huge difference in the child’s development.

Now we are in the second generation, when the autism spectrum is better understood and the diagnosis more readily made – in fact, the prevalence of the diagnosis has doubled in a decade – it is a huge percentage of the population, touching so many families, so much so that people on the spectrum should be appreciated as having different abilities, rather than disabilities.

And that’s the goal for the “third generation”: that people can be appreciated for their differences and abilities, with appropriate academic and life skills preparation in schools, job training and opportunities, and adult home living arrangements that give some independence.

The documentary, “This Business Of Autism” addresses the positive impacts of developing profitable businesses while leveraging the unique capabilities of adults with autism. By confronting head-on the reality that an estimated 70% to 90% of these adults are unemployed or underemployed, these businesses can also provide avenues for corporate social outreach, mitigate the economic impacts on communities, and provide hope for families that their children might have sustainable, relevant and stimulating employment opportunities.

The film serves as a tutorial, a business manual, and even more importantly, raises awareness and overturns misconceptions. It sensitizes corporations, employers, communities about what they can do, what they need to do, to help.

“We wanted to show the capabilities of the middle 60% – not the top or the bottom 20% – but the middle 60% who are hard working, dedicated, loyal,” said Stephen Mackey, the film’s director, at the world premiere of the film, presented as part of the Gold Coast Arts Center’s Cinema Series, at the Soundview Cinemas, mere blocks away from Spectrum Designs new building on Main Street in Port Washington.

The documentary is available on Vimeo on Demand and on Amazon, and will be available on itunes and Googleplay.The producer is also taking orders for blueray, dvd and educational packages. “We believe that there are universities and vocational schools that will see what Spectrum Designs is doing. Half of the proceeds are being returned to the Spectrum Foundation.