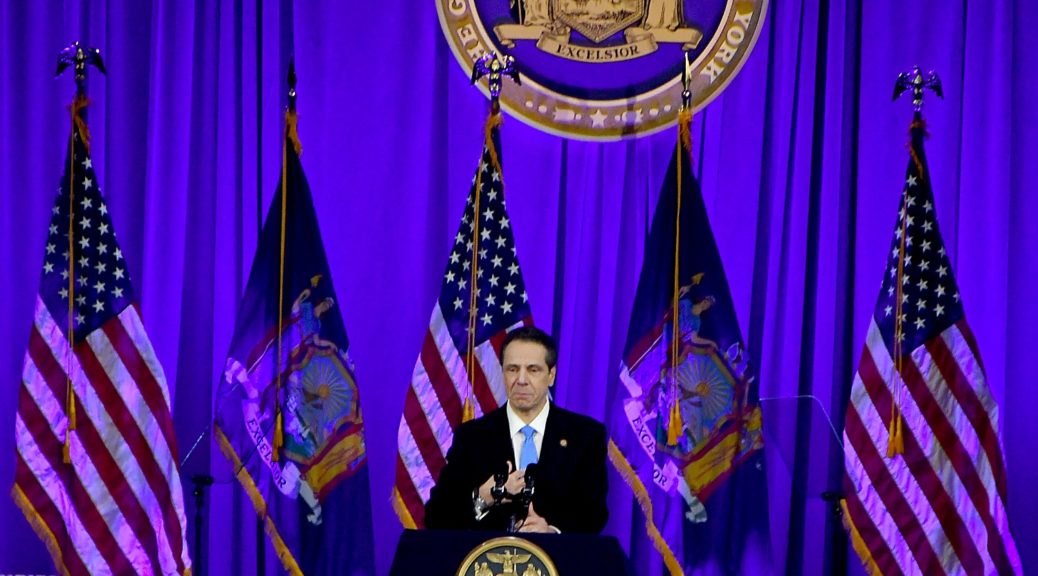 In an inaugural address worthy of a president, Andrew Cuomo, sworn in for his third term as Governor of New York State, pledged to fulfill an ambitious, progressive Justice Agenda: voting reform, strengthening gun laws, protecting health care, legalizing marijuana and reforming the criminal justice system. The venue was key to his message: the great hall at Ellis Island where millions of impoverished immigrants, the forebears of so many New Yorkers, escaped poverty and persecution to pursue the American Dream, and standing as the greatest symbol of difference with the federal administration.

The setting was relevant, as well, because the shutdown of the federal government, forced by Trump’s demand for billions of dollars to build a wall across the length of the southern border with Mexico, has caused a cascading series of closures at national parks and monuments, but New York State is paying to keep the Statue of Liberty and Ellis Island open, and he used it as a symbol of what the state stands for and would strive for, and as a parable for the different approaches to leadership and governance.

“When they write the history books about this time and place, I believe they will record this period as one of global and national unrest. A time that saw thousands of new immigrants reaching for our borders in search of hope. A time that saw troubled, frightened, American citizens frustrated by economic stagnation and a deteriorating democracy, have grave new doubts about where our country is headed.

“There is now a fundamental questioning of the viability of the American promise. A covenant that created our nation’s founding 242 years ago and reached full flower right here in this Great Hall for our ancestors yearning to breathe free, illuminated by the torch of our great Lady in the Harbor. A land that would work with you to lift you up to reach new heights, as high as your wings and work could carry you, with individual freedom and equal rights for all. An American promise grounded on the theory that we would work together.

“This sacred compact has held firm through the centuries, through world wars, internal dissension, and economic depressions. Through it all, we overcame, we rallied as one, and we built the strongest nation on the globe. There is no other nation that can threaten us. America’s only threat is from within: it is the growing division amongst us. The threat is when we see ourselves as black or white, foreign or native born, instead of as Americans. As Christians or Jews or Muslims, gay or straight, instead of as Americans. That, my friends, is truly frightening.

“And that is the threat that we face today. As our nation once confronted a great economic depression, we now confront a great social depression. People’s frustration is turning to fear and the fear is turning to anger and the anger is turning to division. It is impossible to overstate how dangerous, how malignant this condition is. It is like a cancer that is spreading throughout our society, a disease that causes one cell in the body politic to attack other cells, to turn one against one another.”

He said, “The hard, but true path is to confront and actually solve the problem. The easy, but false path is to use the anger to blame someone else, and the easiest target to blame is always the people who are different. And this federal government has sought to demonize our differences and make our diversity our greatest weakness, rather than our greatest strength. We always knew, we always knew that the concept of E Pluribus Unum, forging one people from many different origins would be difficult, we knew it.”

In setting out his progressive agenda and to counter the skepticism that it could be accomplished, Cuomo noted that now that both houses of the Legislature are Democratic, “I feel liberated. I felt like I was fighting with one arm tied behind my back. And we will not repeat mistakes of the past. We know hollow campaign rhetoric and false political posturing only aggravates the frustration…

Cuomo, who has in his prior two terms done bold things on the scale of Franklin Delano Roosevelt when he was New York State governor, in fact, invoked FDR, saying, “Just as FDR turned the frustration of the economic depression into a movement that passed the New Deal, let New Yorkers’ frustration of the social depression to pass a new justice agenda – advancing social racial and economic justice – and let us address our issues, our very real issues with a progressive agenda – not a regressive agenda – an agenda that moves us up, forward and united, not down, backwards and divided.”

He laid out an ambitious agenda: “Within my first 100 days, I will propose to the new Democratic Legislature the most progressive agenda this state has ever seen, period.

“From voting reforms, to Roe v. Wade for New York, to protecting a woman’s right to choose. To better gun laws, to healthcare protection, to legalizing marijuana, to protecting the labor movement, to a green new deal, to real criminal justice reform – we will make history and New York will move forward. Not by building a wall, my friends, but by building new bridges, and building new airports, and creating new middle class jobs and an economic future for the next generation and showing us how good we can be at our best when we are together.”

Cuomo declared, “We will get it done. And it won’t just be what New York got done at this defining moment, but how we did it. The way we’re going to do it is by bringing people together. Democrats and Republicans. Upstate and downstate. Young and old. All of us together because we believe, in New York, that we can be a people truly guided by our better angels. Because New York believes that our interconnection and interdependence come from our essential goodness.

The setting was relevant, as well, because the shutdown of the federal government has caused a cascading series of closures at national parks and monuments, but New York State is paying to keep the Statue of Liberty and Ellis Island open.

One after another of the state leaders sworn into office – Lt. Governor Kathy Hochul, Comptroller Tom DiNapoli and Attorney General Latisha James – referred to immigrants and their own origins, coming from humble circumstances.

Governor Cuomo reemphasized the point: “we believe the promise that attracted 5000 people a day to come from across the globe to this sacred place, through this portal on Ellis Island, that this is not a faded memory of yesterday, but rather a shining beacon for a better tomorrow.

“Ellis Island remains the place where Maud McKoy arrived from the poor island of Jamaica. Whose son was educated in New York public schools, and rose to become the United States Secretary of State Colin Powell.

“It is the place where Rose and Joseph Amster, Jewish immigrants from Austria arrived, whose Brooklyn-born granddaughter would become Supreme Court Justice Ruth Bader-Ginsberg.

“This is the place, and this is the promise that made America, America. And no one can ever forget that. It doesn’t matter how high one is raised, or what office one’s occupying. Never forget where you came from, and never forget or deny this place. Because this is the place where Richard Cawley arrived fleeing starvation in Ireland, and whose grandson is now Vice President Mike Pence.”

“This is the harbor where Frederick Trump [Drumpf] arrived from Germany, and whose grandson would become President of the United States. Don’t you tell me Ellis Island isn’t real, and true, and the promise it made America lives today, because it does,” he said in the only part of his address in which he referred to Trump by name.

Referring to his father, Mario Cuomo, who passed away on January 1 four years ago, he said, “he would implore us all each and every one to stand against the tide to fight back and that New York should lead by example by the power of our example and lift up New York to show the nation the way forward, show them the better way. And he would be right.”

Here are more highlights from the event: