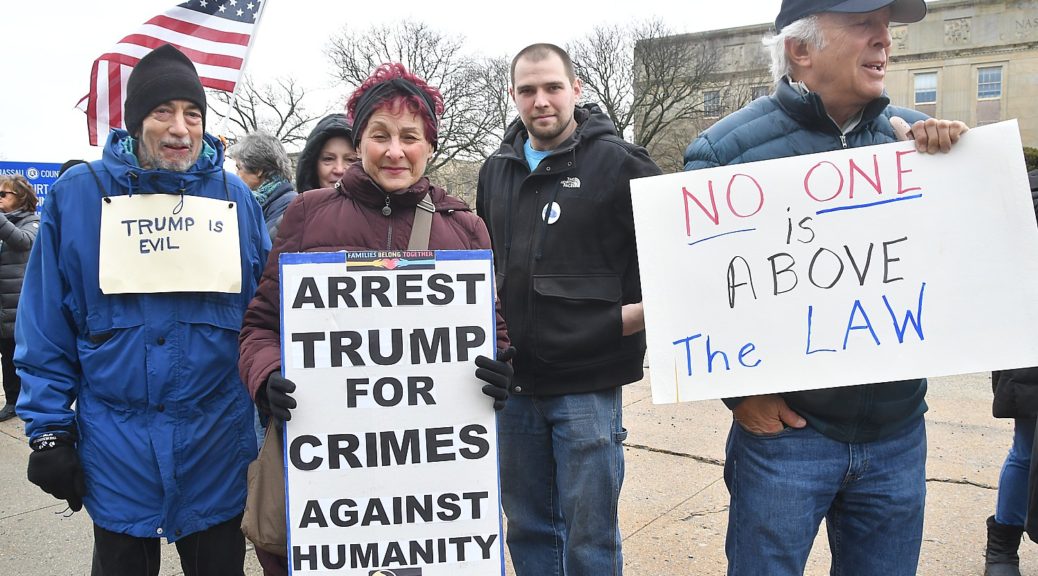 Some 55 Long Islanders assembled in front of the Nassau County Courthouse in Mineola on Presidents Day to protest the anti-President, the illegitimate occupier of the White House who has yet again fouled the office and undermined the Constitution and the Rule of Law in his personal quest to see just how much authoritarian rule he can muster to overcome his incompetence. We were just one of more than 250 protests in 47 states that were held.

Just as Trump abused the claim of “national security” in order to usurp power to implement an otherwise unconstitutional Travel Ban and overturned ratified trade agreements (Canada, really!) and treaties (the Reagan-era Intermediate-Range Nuclear Forces (INF) Treaty with Russia), Trump now perverts “national emergency” in order to preempt Congress’ Article 1 power of the purse in pursuit of building his political and personal monument, the southern border wall. And to do it, he would rob other projects, deemed worthy of appropriation by Congress: $2.5 billion in military narcotics funding and $3.6 billion in military construction necessary to cure the decrepit housing.

The very definition of “emergency” – and the clear intent when Congress passed it – was to enable a President to react to immediate crises – a foreign attack, a natural disaster – when Congress could not have time to.

But after two years of Republican control of all branches – executive, legislative and judicial – and not getting the appropriation to build the wall that even Republicans recognized as wasteful and ineffective (when Trump nixed the Democrats’ offer of $25 billion in exchange for DACA), and then a 35-day government shutdown followed by weeks of deliberation in which the Congress deemed $1.4 billion sufficient for “border fencing,” now he insists there is a “national emergency.”

What is more accurate is that there is a humanitarian crisis solely of Trump and his thugs’ making, for which in a just world, he and Homeland Security Secretary Kirstjen Nielsen, HHS Secretary Alex M. Azar II, and anyone else involved in conceiving and implementing the torturous “family separations” and “zero tolerance” policies would be tried, convicted and jailed for crimes against humanity.

But in pursuit of these human rights violations, Trump is also violating international and US law. Those Trumpers who insist “why don’t they come in legally as my grandfather did?” should recognize that Trump has shut down what legal immigration system there was – in fact, it hasn’t functioned since Reagan, which is why there are an estimated 11 million undocumented people.

Instead of actually dealing with the immigration crisis – starting with reuniting parents with their children, implementing a program to properly vet and legalize the status of Dreamers and parents of American citizen children, the tens of thousands who have been in the US legally for decades under the Temporary Protected Status (TPS) programs, and those who have a legal claim to asylum – Trump has actually closed access through legal ports of entry, while declaring anyone who enters and then surrenders to border patrol, as having committed a crime, and therefore ineligible for asylum. That violates US and international law.

The absurdity of Trump’s unlawful assertion of “national emergency” to build a wall is the fact that he would only have one year before it expired – and the $8 billion he is expropriating would hardly be sufficient. Moreover, a wall takes tremendous amount of time to build, even if it would actually keep out drugs and gangs (which it won’t). Hardly a way to address an actual “emergency.”

Of course, Trump admitted as much when he betrayed his utter ineptitude when he declared the emergency when simultaneously declaring, “Of course I didn’t need to do this. But I’d rather do it much faster.” The money, he said, could be reallocated from the many “unimportant” projects – like disaster aid to Puerto Rico and California, or cutting funding for 9/11 victims.

He then boasted about having so much money – even in the defense budget. “When you have that kind of money going into the military, this is a very, very small amount that we’re asking for,” Trump said.

Here’s the question: if the Defense budget is so bloated (at $719 billion), doesn’t that mean that Congress should allocate funding elsewhere, like health care, infrastructure, child care, R&D? (Yes.)

In addition to the Democratic-controlled House advancing a resolution rescinding the declaration, and organizations like the ACLU bring suit, 16 states (including New York), led by California, are now suing Trump. “We’re going to try to halt the President from violating the Constitution, the separation of powers, from stealing money from Americans and states that has been allocated by Congress, lawfully,” California Attorney General Xavier Becerra stated.

But then I realized that just as Trump’s sing-song description of how he expects to lose in the 9th circuit but expects to win at the Supreme Court, which going back to Bush has been stacked with “justices” who believe in a Unitary Executive (when a Republican is in office), that this same Supreme Court right-wing, Federalist Society majority, that would empower Trump’s “presidential discretion” today would beat back a national emergency claim by a Democratic president for these purposes, just as they contradicted the Constitution and precedent in Citizens United, Hobby Lobby, Heller, Bush v Gore.

“The risk is that we limit the president’s power to act when it really is necessary, when it is not practical to bring the Congress into session on a moment’s notice,” said Congressman Adam Schiff, who chairs the House Intelligence committee. “But this president doesn’t care about future presidents. He only cares about himself. And in this case, he only cares about placating his conservative critics.”