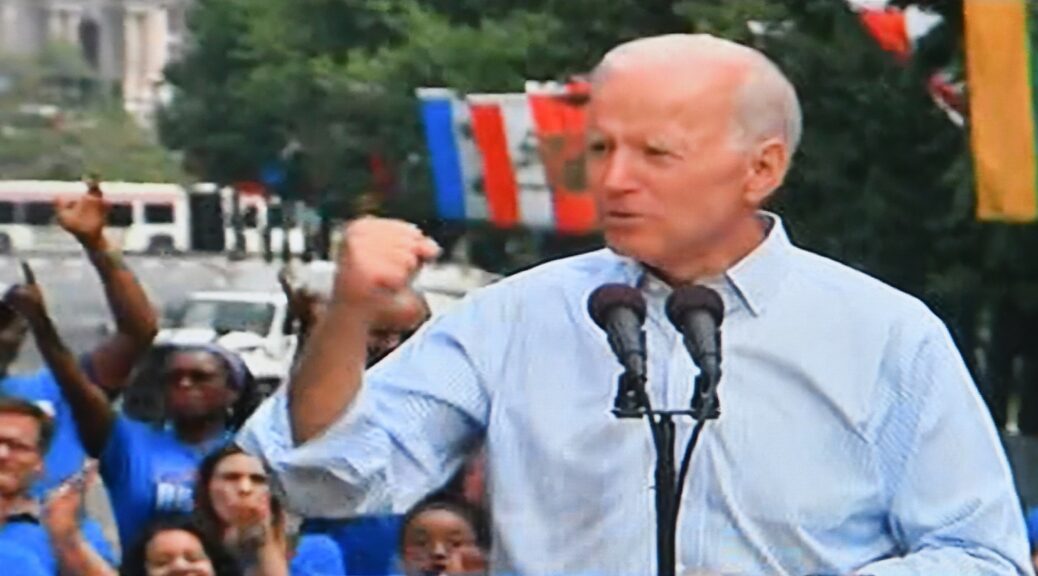 Joe Biden, two-term Vice President under Barack Obama, officially launched his own campaign for 2020 at a rally in Philadelphia, his wife, Dr. Jill Biden’s hometown and the city where the Declaration of Independence and Constitution, were birthed and for the first time, structured a government around “We the people.”

“In 1776, the Declaration of Independence: ‘We hold these truths to be self-evident.’ Those words formed the American creed. Equality. Equity. Fairness. America didn’t live up to that promise for most of its people, for people of color, for women.

“But we are born of the idea that every single person in this country — no matter where you start in life — there’s nothing that’s beyond your capacity if you work hard enough for it.”

Unity – one America united around common values and a belief that each is entitled to the same opportunity – is a big theme for Biden, who blasted the divisiveness, the dysfunction of government, starting with Donald Trump.

“Some say Democrats don’t want to hear about unity. That they are angry– and the angrier you are – the better. That’s what they are saying to have to do to win the Democratic nomination. Well, I don’t believe it. I believe Democrats want to unify this nation. That’s what we’ve always been about. Unity.

“If the American people want a president to add to our division, to lead with a clenched fist, closed hand and a hard heart, to demonize the opponents and spew hatred —  they don’t need me. They already have a President who does just that. I am running to offer our country – Democrats, Republicans and Independents – a different path.”

“I know how to make government work. I’ve worked across the aisle to reach consensus. And I can do that again with your help,” he said, often having to speak over a heckler and whistles.

“Compromise is not a dirty word; consensus is no a weakness – the founders designed constitution to require consensus – it’s what I did as Senator, what I did as vice president working with Barack Obama…

If I’m elected your president, I will do whatever to make progress on matters that matter most – civil rights, women’s rights, climate change policy that will save our children, grandchildren.

“I know there are times when only a bare knuckle fight will do –I can take on Republicans. That’s what took to pass the Affordable Care Act – it was a big… deal…

“Barack Obama was an extraordinary man…. Someone your children looked up to…I’m proud to have served as his vice president [and proudest of] passing health care. Past administrations tried and failed; it was done by Obama without a single Republican vote.

“Trump likes to take credit for economy and economic growth – but look at facts, not alternative facts- he inherited a strong economy from the Obama-Biden administration.

“The Recovery Act helped save the country from economic ruin –  we had to get the work done – if we hadn’t, we could have had another Great Depression . Working together matters. The American people want government to work.

“The country is sick of division, sick of childish behavior – there isn’t a single person in this country who could get away with that in their job. All people want is for their senator, their congressman to do their job, and above all, a president who measures the day by people he brings together rather than division he sows…a president obsessing over personal grievance.

“The greatest challenge we face will be over technology, intellectual property, clean energy, a warming planet – and not a single thing that building a wall [or attacking immigrants] can address….

“We have to focus on the future .. we will invest in educational assistance our people need to succeed in 21st century because any country that out-educates us will out compete us.”

On health care, he said that instead of starting over, certainly not tear down, “we need to go to the next step” with the Affordable Care Act.

On infrastructure, he said, “Highways, ports, airports need to be greener, more rational. No one should have to drink poisoned water; protect the nation from cyber attack [and bring] solar and wind energy across the same lines.

“We know what we have to do.That’s why I’m running – stop fighting, start fixing… together.

“There is not much time left,” he declared. “We need a clean energy revolution, starting now. Clean energy and jobs creation go together…

“We have to work together to get it done….We need a president who will lead.”

Getting down to brass tacks, he said, “The single most important priority on my list: defeat Donald Trump…

“I’ve watched [Trump] for 3 years instilling fear, undermining every institution designed to check abuse of power- all to solidify his base and expand power.

“Attacks on free press as the enemy of the people is nothing to be dismissed – tyrants, dictators all over the world use the same [rhetoric]. Attacking the independence of courts – saying he cannot trust a judge because of his Mexican ancestry, that’s not America, Democrat or Republican.

“This undermines our standing around the world.

“Are we a nation that believes in the moral equivalent between neo-Nazis and the KKK, and those with courage to stand against them? We don’t but Trump does.

“Are we a nation who believes it’s okay to tear children from the arms of parents at the border? We don’t but Trump does.

“Are we a nation that [coddles up to] a tyrant like Kim Jong Un? We don’t but Tump does.

“Remember who we are, what we stand for, what we believe. Every day I am reminded nothing is guaranteed by our democracy, we have to fight for it, earn it.”

Biden cited Lincoln’s Gettsburg Address, saying, “the great task remaining before us, that government of, by, for the people shall not perish from the earth.

“That challenge has been handed down to every generation. That challenge is now handed to us, that future generations will measure us by. Will we be the ones to let government of, by, for the people perish from the earth?

“We will not, I will not, you will not let perish on my watch or yours.

But while we confront “the biggest threat any of us have faced in our entire lifetime,” he added, “on other hand, we‘ve never had a future more promising.

“I’m more optimistic about America’s future today, than when I was first elected, too young to be sworn in. We are in a better position to lead in the 21st century. Our workers are 3 times as productive, we have the biggest economy in the world, the strongest military in the history of the world. Entrepreneurs…there are more great research universities in this city, this state, this country than all the world combined..

“We lead by the power of example not by the example of power. The only thing to defeat America is America itself and we cannot let that happen.

“Let them know who we are, what we stand for – unity over division.”