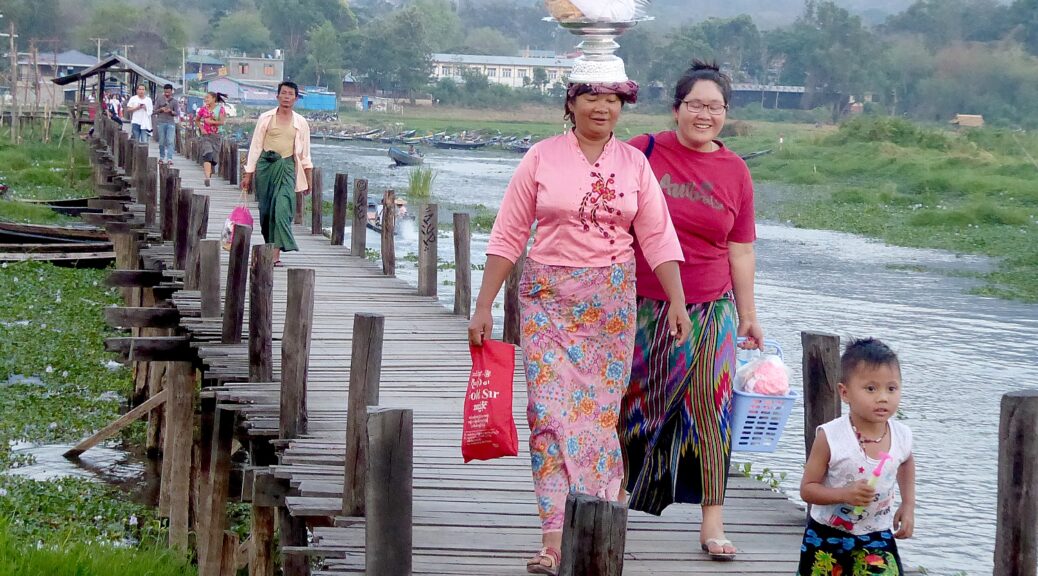 Bill Chalmers, the “ringmaster” and Chief Experience Officer of the Global Scavenger Hunt, launches us on this around-the-world-in-23-days mystery tour with what he calls a “chimpanzee test” – a test where a chimpanzee is likely to get more answers right than a human being who has news and information available to them. The test basically demonstrates that unlike the gloom-and-doom of headlines, the trendlines are positive and these are actually the best of times for human society.

Throughout this Global Scavenger Hunt, “A Blind Date With the World” – where we don’t know where we are going next until we are told when to go to the airport or get ourselves there, and along the way, complete scavenges and challenges –  we are encouraged, even forced, to “trust in the kindness of strangers.” To interact with local people even when we can’t understand each other’s language. To learn and understand for ourselves.

For me, it is an incomparable opportunity to see in close proximity and context what is happening in countries literally around the globe – to examine this notion of American Exceptionalism, America First; to see the scope of such hot-button issues as trade, technology, migration and how they have played out over the longer course of human civilization. (I have a theory that 98% of Trump’s so-called hard-core base have never traveled beyond their own provincial border.)

As Chalmers notes, it is conceit to think we can parachute into places and understand the nuances of complex issues, but still, travel is about seeing for yourself, but also gaining an understanding of one another, disabusing stereotypes or caricatures, and most significantly, not seeing others as “other”, which works both ways. In very real ways (and especially now), travelers are ambassadors, no less than diplomats. Isolating people is not how change happens – that only hardens points of view, and makes people susceptible to fear-mongering and all the bad things that have happened throughout human history as a result. “See for yourself,” Chalmers tells us.

This is particularly poignant when we arrive in Myanmar:  One of the first things I see upon arriving in Yangon, Myanmar (formerly known as Rangoon in its colonial days) is the National Human Rights Commission which at this juncture, strikes as ironic. But despite the awful headlines, we all find the people of Myanmar to be kind, gentle, considerate. And a complete lack of politics or angst.

And just after returning home, the two prizewinning Reuters journalists imprisoned for their reporting of the deadly crackdown on the Rohingya, were released.

Vietnam is a testament to the resiliency of human society to rebound after wars and other crises (as we see everywhere, in fact – in Spain, in Portugal, in Greece, places that suffered during World War II, and you reflect on the success of the alliances that set the stage for 70 years of progress, now being weakened). In Vietnam, visiting the Chu Chi Tunnels and the War Remnants Museum, you cannot help but feel ashamed at the war crimes that remain unpunished because of the wealth and power of the United States.

In Gibraltar, still a colony of Great Britain, I come upon a May Day labor rally that could have been New York City: Privatization. Nonconsultation and lack of transparency. Unfair distribution. Wage increases that don’t keep up with the cost of living.

Abu Dhabi is like a fantasy of a society built on oil wealth, conspicuous ostentation, a gallery of skyscrapers that defy physics; Amman, Jordan, on the other hand, is the real world. But my side trip to Petra – a fantastic city carved out of the rock faces, showed how greatness is made possible by innovations in engineering a water supply. Petra was able to dominate (and protect) the caravan routes, and the result was fabulous art and culture.

This theme picked up again in Athens, visiting the National Archaeological Museum, where I am struck by the artistry from 2500 years ago (themes and imagery that I will see again repeated throughout history on our final stop in New York City, at the Metropolitan Museum of Art) and realize that the human species is not smarter or better than thousands of years ago, we just have better tools and technology.

But this panel about 6th Century Greece stood out that notes the nexus between trade, migration, innovation, democracy and culture and rise of empire:

“The nature of the economy underwent a radical change as a result of the growth of trade. A new class of citizens emerged who were conscious of liberty and its potential and now demanded the right to play an active role in the running of public affairs….The liberty that was characteristic of the Greek way of life and which governed their thinking finds eloquent expression in their artistic creations. …Works of art and artists moved freely along the trade routes. The wealth and power of the city-states were expressed in the erection of monumental, lavishly adorned temples and impressive public welfare works.

“Greeks turned their attention to the natural world and to phenomena that gave rise to philosophical speculation, formulative ideas such as those of matter, the atom, force, space and time, and laying the foundations of science…”

These themes are repeated in New York City  where our “Global Scavenger Hunt” ends. At the Metropolitan Museum of Art where the challenge I take is to find objects from five of the countries we visited, and this leads me to a fascinating exhibit, “The World Between Empires: Art and Identity in the Ancient Middle East.” The museum rarely (if ever) becomes political, but in this exhibit, archaeologists comment on the destruction of Palmyra and other ancient sites by ISIS.

“It may seem frivolous to focus on monuments, museums when people are enslaved and killed. But to wipe out, destroy culture is a way of destroying people. We must protect heritage as well.”

It is a humbling experience, to be sure, to go to the origins of the great civilizations, fast forward to today. How did they become great? How did they fall? Greatness is not inevitable or forever.  Empires rise and fall. Rulers use religion, art and monuments to establish their credibility and credentials to rule; successors blot out the culture and re-write history. Traveling around the world, you appreciate just what a small world it is, how interdependent we are, how vulnerable our societies are, and that individuals do have impact. Also, that people everywhere are more similar than different.

I come back to a monstrously disturbing New York Times headline: “Humans Are Speeding Extinction and Altering the Natural World at an ‘Unprecedented’ Pace:”

“Humans are transforming Earth’s natural landscapes so dramatically that as many as one million plant and animal species are now at risk of extinction, posing a dire threat to ecosystems that people all over the world depend on for their survival, a sweeping new United Nations assessment has concluded.”

In this case, headlines are trendlines. And it isn’t just about aesthetics or seeing animals like the Barbary Macaques that delight tourists in Gibraltar, but whole economies and sustenance. It is a matter of national security, peace and progress. It is about food and water supply, disease, habitable spaces. Sea level rise alone is expected to trigger 300 million climate refugees, competing for dwindling resources. There have been periods of mass extinction in the past – in fact, homo sapiens (us) were touch and go there for awhile.

Chalmers started off our “Blind Date With the World” with the Nicholas Kristof model, that these are actually the best of times for human society despite the gloom and doom headlines. But I disagree: the trendlines are not that hopeful. We may well be living in a golden age of human capacity, but we must recognize that we now have the power of the Gods to shape, to destroy or to create. And we seem too short-sighted to see that.

“Governments must start putting people and the planet ahead of corporate interests and greed and act with the urgency this report illustrates,” writes Annie Leonard, Executive Director, Greenpeace USA. “Leaders must adopt strong targets and implementation plans to protect biodiversity with the active participation and Free, Prior, and Informed Consent of Indigenous Peoples and local communities. Instead of plundering the forests and seas for short-term profit we need to shift our system into one that respects planetary boundaries.”

The Greek Gods may well have the last laugh at the extraordinary ability humans have to destroy themselves.

© 2019 News & Photo Features Syndicate, a division of Workstyles, Inc. All rights reserved. For editorial feature and photo information, go to www.news-photos-features.com, email [email protected]. Blogging at www.dailykos.com/blogs/NewsPhotosFeatures.  ‘Like’ us on facebook.com/NewsPhotoFeatures, Tweet @KarenBRubin