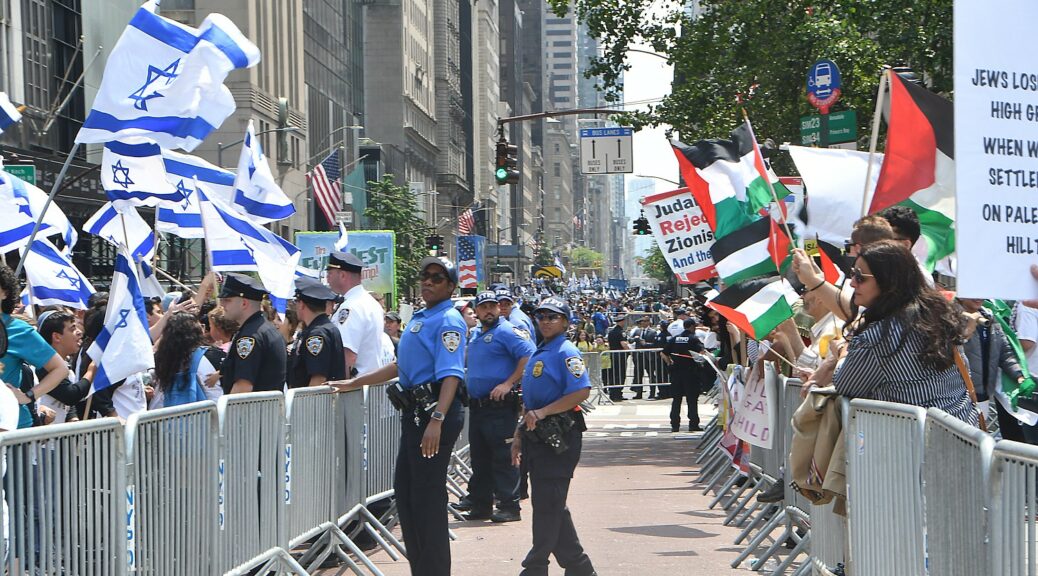 In stark contrast to the 40,000 marching with joyful exuberance and  pride in the Celebrate Israel Parade on Sunday, June 2, there was a smattering of the oddest collection of protesters, who stood on one small stretch Fifth Avenue in front of the fountain between 58-59 streets.

There were religious Jews who claim that a state of Israel should not exist until the Messiah has come; a few Palestinians accusing Israel of terrorism, clearly ignoring the thousands of bombs lobbed from Gaza; and a couple of what are presumed American Jews who charge that the West Bank settlements are immoral and an impediment to peace.

Things got testy at points between the marchers and the handful of pro-Palestinians, with loud shouting matches and dueling flags, the protesters wielding cellphones, hoping to provoke some viral video, across a 10-foot “no man’s land” between metal barriers guarded by police.

When US Senator Charles Schumer came by, he at first passed stoically as a few hecklers taunted him (a Trump supporter yelled at him to “Go Home” – the Senator from New York is from Brooklyn) but finally turned his bullhorn to respond to a woman who screamed “Why are you supporting Israel?” with a comment that boiled down to “Why shouldn’t Jews have a homeland?” At which point his aides refocused him and he marched on.

The encounters seemed to get more heated as the afternoon wore on, but as the police successfully moved marchers along using tact and restraint to defuse the situation, even stopping the protesters from using an elongated pole on their flag like a lance, and the marchers went into a celebratory song and dance.

But as I stood between the two screaming entities, reflecting on the thousands of marchers parading jubilantly, protected by a police force against the smattering of opponents, I thought how different it would be living in a society that oppressed Jews (or any minority), where that minority had to live in fear, practice in secret, where the police, the courts and the government were agents of suppression and repression, and instead of thanking the police officer on 57th Street as they passed, as I saw just about every group do, they had to fear the police, fear the state. The images of police beating protesters at Pettus Bridge in 1965 Selma; Kristallnacht in 1938 Germany came to mind.

How different things could be.

“And I want the people of this state to be clear: anti-Semitism is not just wrong and immoral and unethical and anti-American; it is also illegal,” Governor Andrew Cuomo told a press gaggle as he began the march. “And we will enforce the law to the fullest extent and you have my word on that.

“As a sign of solidarity, at this time of crisis for the Jewish people, I’m going to be doing another trip to Israel as a trip in solidarity right after the legislative session and I invite my Jewish colleagues to join us as a sign of solidarity. New York stands with Israel. We are all Jewish today. We all appreciate the Jewish community. They are part of what makes New York, New York and one of the best parts.”

Asked what is being done to combat the wave of anti-Semitism, Cuomo said, “We have increased the hate crime penalties all across the state. We are working on more understanding, more communication, but we’re also going to enforce the law because it has reached a critical point. Eighty-three percent increase in the state of New York. Twenty-two percent increase in neo-Nazi groups. And by the way, I invite all politicians to condemn the neo-Nazi groups for what they are. They are domestic terrorists. That’s what they are. And this is not part of the democracy. They spread hate, they spread violence, they attack and every politician—Democrat, Republican—should condemn these neo-Nazi groups and call them for what they are.”

Governor Andrew Cuomo had as his special guest Devorah Halberstam, who runs the Jewish Children’s Museum. Halberstam started the museum in honor of her son Ari Halberstam who was killed in an anti-Semitic attack. This week, an anti-Semitic note was left there, “Hitler is Coming.”

Just a few days later, on June 6, after another incident of anti-Semitism in which the words “Kill All Jews,” “Israel” and “Mario Cuomo” were written on a mailbox in Bay Ridge, Brooklyn, Cuomo said, “Hate speech and threatening language has no place in our state, and the mailbox was immediately replaced with a new one after the graffiti was reported.

“Enough is enough. We are reaching our breaking point and these despicable acts of violence must stop. We will not back down in this fight against intolerance and bigotry, and we will continue to stand up to those individuals who spew hateful language and attempt to spread fear across our state.

“As New Yorkers and as a nation, we must denounce anti-Semitism and hate in all its forms. I am directing the New York State Police Hate Crimes unit to assist the NYPD in the investigation into this incident and to provide all resources necessary to hold accountable those responsible.

“In the face of these ongoing incidents that are ripping at the fabric of our State, we will do everything in our power to ensure the continued safety and equal treatment of all New Yorkers.”