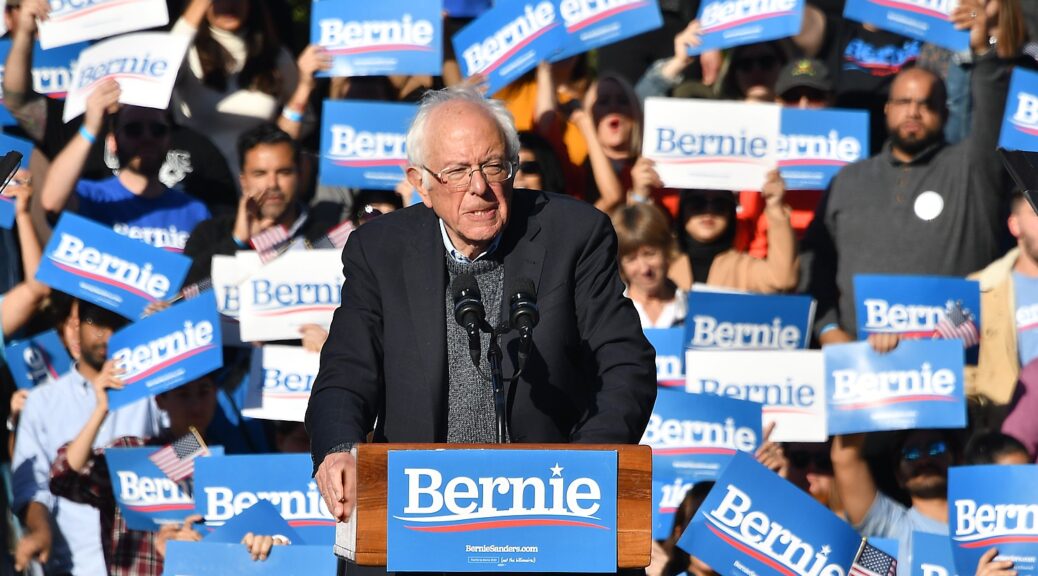 One of the most severe criticisms of Senator Bernie Sanders’ candidacy is the price tag of his progressive programs including Medicare for All, College for All, universal child care and pre-K, and Green New Deal and how these programs would be paid for. In the Charleston, SC debate (number 10 for anyone who is counting), Senator Amy Klobuchar charged that his plans, collectively, would cost $60 trillion, or three times the entire US economy. Now, just ahead of the South Carolina and Super Tuesday primaries, Sanders has released his plan to pay for his major policy proposals, which he handed to Chris Cuomo during a CNN town hall on February 24:

It will cost $2.2 trillion to make public colleges, universities and trade schools tuition free and to cancel all student debt over the next decade.  It is fully paid for by a modest tax on Wall Street speculation that will raise an estimated $2.4 trillion over ten years.

Bernie’s bill to expand Social Security will increase benefits for low-income senior citizens and people with disabilities by more than $1,300 a year.  It is fully paid for by making the wealthiest 1.8% of Americans – those with incomes over $250,000 a year – pay the same rate into Social Security as working families.

This bill will also extend the solvency of Social Security into the year 2070 – ensuring that Social Security can pay every benefit owed to every eligible American for the next 50 years.

Bernie’s proposal to guarantee housing as a human right and to eliminate homelessness will cost $2.5 trillion over the next decade.

Bernie’s proposal to guarantee universal childcare and pre-school to every family in America who needs it will cost $1.5 trillion.

Bernie has introduced a proposal to eliminate all of the $81 billion in past due medical debt held by 79 million Americans.  It is fully paid for by establishing an income inequality tax on large corporations that pay CEOs at least 50 times more than average workers.

The $16.3 trillion climate change proposal that Bernie has introduced will fundamentally transform our energy system away from fossil fuel and towards energy efficiency and renewable energy.  It will also create 20 million good-paying union jobs in the process.

It is fully paid for by:

– Raising $3.085 trillion by making the fossil fuel industry pay for their pollution, through litigation, fees, and taxes, and eliminating federal fossil fuel subsidies.

– Generating $6.4 trillion in revenue from the wholesale of energy produced by the regional Power Marketing Administrations.  This revenue will be collected from 2023-2035, and after 2035 electricity will be virtually free, aside from operations and maintenance costs.

–  Reducing defense spending by $1.215 trillion by scaling back military operations on protecting the global oil supply.

–  Collecting $2.3 trillion in new income tax revenue from the 20 million new jobs created by the plan.

– Saving $1.31 trillion by reduced the need for federal and state safety net spending due to the creation of millions of good-paying, unionized jobs.

If we do not act, the U.S. will lose $34.5 trillion by the end of the century in economic productivity.

According to a February 15, 2020 study by epidemiologists at Yale University, the Medicare for All bill that Bernie wrote would save over $450 billion in health care costs and prevent 68,000 unnecessary deaths – each and every year.

Since 2016, Bernie has proposed a menu of financing options that would more than pay for the Medicare for All legislation he has introduced according to the Yale study.

Creating a 4 percent income-based premium paid by employees, exempting the first $29,000 in income for a family of four.

(Revenue raised: About $4 trillion over 10-years.)

Eliminating health tax expenditures, which would no longer be needed under Medicare for All.

(Revenue raised: About $3 trillion over 10-years.)

Raising the top marginal income tax rate to 52% on income over $10 million.

Replacing the cap on the state and local tax deduction with an overall dollar cap of $50,000 for a married couple on all itemized deductions.

Taxing capital gains at the same rates as income from wages and cracking down on gaming through derivatives, like-kind exchanges, and the zero tax rate on capital gains passed on through bequests.

Enacting the For the 99.8% Act, which returns the estate tax exemption to the 2009 level of $3.5 million, closes egregious loopholes, and increases rates progressively including by adding a top tax rate of 77% on estate values in excess of $1 billion.

Using $350 billion of the amount raised from the tax on extreme wealth to help finance Medicare for All.