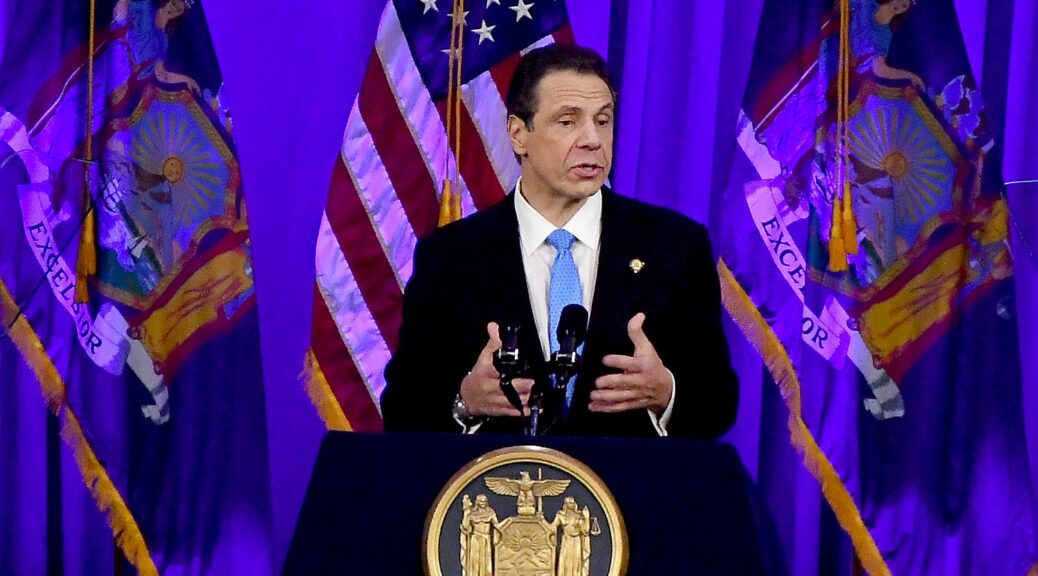 Governor Cuomo: “I understand we’re all consumed with the coronavirus situation but we have to be able to walk and chew gum. We have to move forward at the same time and that’s why passing the budget and these pieces of legislation were important. These issues are still important and child vaping, et cetera, surrogacy, these are major issues for people. And they passed last night and congratulations.”

Governor Andrew M. Cuomo today signed the FY 2021 Enacted Budget. The budget is balanced, includes no new taxes, continues to phase in tax cuts for the middle class, enacts the strongest Paid Sick Leave program in the nation, and advances other progressive priorities including the legalization of gestational surrogacy.

This is a transcript of the Governor’s remarks:

I understand we’re all consumed with the coronavirus situation but we have to be able to walk and chew gum. We have to move forward at the same time and that’s why passing the budget and these pieces of legislation were important. These issues are still important and child vaping, et cetera, surrogacy, these are major issues for people. And they passed last night and congratulations.

The budget was difficult because the State has no money, and how do you do a budget when you can’t really forecast revenues, and we came up with a somewhat novel budget that actually is calibrated to future revenues or losses. So we really start with an assumption and then what we’re saying is when we see how much revenue the state makes, how fast the economy comes back, what the expenses are, we’ll calibrate accordingly.

We are heavily reliant on the federal aid legislation that gets passed. The federal government has passed a couple of pieces of legislation. They’re planning to pass another piece of legislation. It’s very important that whatever legislation they pass helps state and local governments. When you deprive a state government all you are actually achieving is that that state government has to turn around and not fund the programs that were dependent on that state government. We fund education, health care. I spoke to Speaker Pelosi today. She’s working on the program for the next piece of legislation. She understands fully the need of state government. She understands fully the need of local governments. She understands my position on how New York was shortchanged in the past bill and she said she’s going to do everything she can do to help New York. I’ve worked with the Speaker many times. I’ve known her for 30 years and I believe her and her credibility and her competence is unparalleled, in my opinion. So I’ll be working with the Speaker and the rest of the Congressional delegation going forward. But we need federal assistance. Depending on how much federal assistance we get, will be that calibration of the budget going forward.

Legalizing Gestational Surrogacy in New York State: The FY 2021 Enacted Budget legalizes gestational surrogacy in New York State once and for all, helping LGBTQ couples and couples struggling with infertility. The legislation will also establish criteria for surrogacy contracts that provide the strongest protections in the nation for parents and surrogates, ensuring all parties provide informed consent at every step of the process, and will create a Surrogates’ Bill of Rights, which would ensure the unfettered right of surrogates to make their own healthcare decisions, including whether to terminate or continue a pregnancy and that surrogates have access to comprehensive health insurance and independent legal counsel of their choosing, all paid for by the intended parents. The legislation included in the Budget will also create a streamlined process for establishing parenthood when one of the individuals is a non-biological parent, a process known as “second parent adoption.”

Passing the “New York Hate Crime Anti-Terrorism Act”:  The FY 20201 Budget establishes a “domestic act of terrorism motivated by hate” crime as a new A-1 class felony punishable by up to life in prison without parole.

Closing the Out-of-State Gun Loophole: The FY 2021 Enacted Budget includes legislation to prohibit individuals from obtaining a gun license who commit serious offenses out-of-state that would disqualify them from obtaining a gun license if committed in New York. This will provide greater consistency in New York’s licensing scheme and ensure individuals who are prohibited from purchasing a firearm are not able to do so. The Enacted Budget also includes legislation to require all state and local law enforcement agencies in the state to opt in to the ATF’s crime gun trace data sharing program and submit crime guns recovered through the ATF’s eTrace system. Additionally, the Enacted Budget includes legislation to amend the Mental Hygiene Law to allow New York to share reports of individuals who are a danger to themselves or others with other states.

Housing and Services for People who are Homeless, Including Those with Mental Illness: New York’s homeless community and those with mental illness are among the hardest populations to help. The FY 2021 Enacted Budget includes an aggressive strategy and additional support to provide housing and services to these vulnerable populations.

Enact a Comprehensive Tobacco Control Policy. Governor Cuomo has taken unprecedented steps to ensure the health and safety of all New Yorkers by combatting the use of harmful tobacco and nicotine products. The Enacted Budget prohibits the sale or distribution of e-cigarettes or vapor products that have a characterizing flavor unless approved as part of an FDA pre-market approval; prohibits the sale of tobacco products, including e-cigarettes, in all pharmacies; restricts the delivery of e-liquid products only to NYS-licensed vapor retailers; restricts the public display of tobacco and vapor products near schools; requires manufacturers of vapor products to disclose to the DOH Commissioner and the public, information regarding the ingredients, by-products, or contaminants in vapor products, whether intentional or unintentionally added; bans certain carrier oils if they are determined to be harmful; bans coupons and manufacturer discounts and displays in shops; and increases penalties for illegally selling tobacco products to minors.

Prescription Drugs: The FY 2021 Enacted Budget includes a three-part plan to lower prescription drug costs for all New Yorkers. The Budget caps insulin co-payments at $100 per month for insured patients to help address the rising cost of insulin that has resulted in diabetes patients rationing, skipping doses and not filling prescriptions. Finally, the Enacted Budget establishes a commission of experts to study the feasibility and benefits of a Canadian drug importation program and submit a plan to the U.S. Department of Health and Human Services for review.

Banning the “Pink Tax”: The FY 2021 Enacted Budget prohibits gender-based pricing discrimination for substantially similar or like kind goods and services. The legislation would require certain service providers to provide price lists for standard services upon request and notice that gender-based price discrimination is prohibited under state law. Businesses that violate the law would be subject to civil penalties.

Authorized the Creation of a $3 Billion Restore Mother Nature Bond Act: The Budget authorizes the creation of a Bond Act to fund critical environmental restoration and climate mitigation projects in every corner of the state to ensure New York is able to adapt to the intensifying impacts of climate change, and reduce emissions, while creating jobs and local economic development. As part of the larger Restore Mother Nature Initiative, the Bond Act will be a key source of funding for projects focused on reducing flood risk, investing in resilient infrastructure, restoring freshwater and tidal wetlands, preserving open space, conserving forest areas, and reducing pollution from agricultural and storm water runoff. It will also fund up to $700 million in projects to fight climate change, including green buildings. It also aims to spend 35 percent of the funds on projects to benefit underserved areas of the state. The Budget Director will assess the state’s finances and the economic outlook later this year and make a determination as to whether to move forward with the Bond Act.

Permanently Banning Hydrofracking: The Enacted Budget codifies Governor Cuomo’s ban on the Department of Environmental Conservation approving permits that would authorize an applicant to drill, deepen, plug back or convert wells that use high-volume hydraulic fracturing as a means to complete or recomplete a well. In addition, it places a moratorium on future gelled propane hydrofracking applications until the Department can conduct an analysis of the impacts of this completion method. This will protect the health of New Yorkers and ensuring permanently that our environment is not harmed by this practice.

Increasing and Modernizing Emergency Response Capacity: Over 60 percent of New York counties have been flooded twice in the past 10 years. We must be ready to handle these increasing, life-threatening, emergency situations. It is a new and growing challenge for our state operations. The FY 2021 Enacted Budget sustains $12 million in capital funding to increase and update the State’s emergency response capacity so our brave women and men have the right equipment to do their jobs.

Addressing Veteran and Law Enforcement Suicides: The FY 2021 Enacted Budget invests $1 million to partner with organizations to help veterans, law enforcement and first responders with suicide prevention efforts. The Budget also directs state agencies to expand suicide prevention strategies for veterans, law enforcement, correctional officers and first responders, including a new campaign by the Office of Mental Health to reduce the stigma of mental illness. Additionally, the State will convene a panel of stakeholders and experts at its annual Suicide Prevention Conference to develop and implement strategies for preventing suicide among these special populations.

Adding E Pluribus Unum to the State Coat of Arms: Our founding fathers said clearly that the idea of unity was the key to America’s future. In 1782, on the first seal of the United States, they said it in three simple words – E pluribus unum, out of many one. This federal government and our nation seem to have forgotten that essential American principle. In this time of turmoil, New York State will remind the nation of who we are by adding E pluribus unum to the State’s coat of arms as part of the FY 2021 Enacted Budget, proclaiming at this ugly time the simple truth that without unity we are nothing.

Highlights of the FY 2021 Enacted Budget are available here.