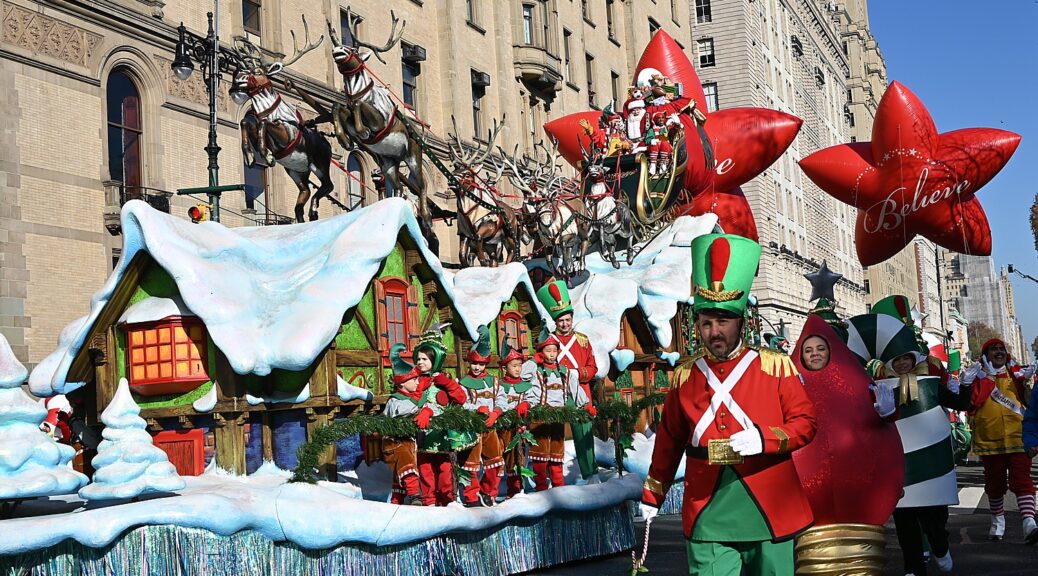 The Macy’s Thanksgiving Day Parade® returned to full strength on Thursday, November 24 to usher in the holiday season. The 96th edition of Macy’s iconic spectacle got underway with the cheer 5, 4, 3, 2, 1…Let’s Have A Parade™!  During the course of the parade, hundreds of thousands of onlookers thrilled to see more than 5,000 volunteers, 16 giant character balloons, 28 floats, 40 novelty and heritage inflatables, 700 clowns, 12 marching bands and 10 performance groups, plus a host of musical stars and celebrities, climaxed with the arrival of the one-and-only Santa Claus on his grand sleigh.

“Since its first march in 1924 and through the decades, Macy’s Thanksgiving Day Parade has served to bring joy to the millions who gather nationwide each year to experience it with friends and family,” said Will Coss, Executive Producer of Macy’s Thanksgiving Day Parade, who cut the ribbon to launch the parade. “This November, as we once again set the stage for the start of the holiday season, we are thrilled to showcase another spectacle full of magic and wonder that will help create everlasting memories with loved ones during this special time of year.”

Conceived during the Parade’s infancy, the giant character balloons have become a signature of the annual celebration. Since 1927, the world’s most popular characters have been transformed into high-flying art in the sky. Originally inspired by marionettes, the Parade’s balloons first debuted as upside down puppets filled with air, which were carried down the Parade route on sticks. The design later evolved to include helium, making them high-flying giants. Over time Macy’s artists innovated creating several types of inflatables including balloonheads (inflated heads sitting atop of a costumed participant), balloonicles (hybrid inflatables with vehicles inside) and most recently, trycaloons (tandem tricycles with an inflated balloon character).

New giants joining the line-up this year included Bluey by BBC; Diary of A Wimpy Kid®by Abrams Books; DINO and Baby DINO by Sinclair Oil; and Stuart the Minion from Illumination.

Strike Up the Band

This year’s lineup of performance groups featured the dazzling dancers of Ballet Hispánico, the hilarious Big Apple Circus, the rhythmic movement of Boss Kids, the artistry of the Fusion Winter Guard, two-steps and high kicks from the Kilgore Rangerettes, the puppeteering skills of Phantom Limb, the iconic stepping of The Sigma Gamma Rho Centennial Steppers, the energetic moves of the St. John’s Dance Team, and the exuberance of Spirit of America Cheer and Spirit of America Dance Stars.

More than 700 clowns add to the joy of the Macy’s Thanksgiving Day Parade.

Spectators lined the parade route from its traditional starting line at 77th Street and Central Park West, down its signature 2.5-mile route from Central Park West to Columbus Circle, turning onto Central Park South and then marching down 6th Avenue/Avenue of the Americas. At 34th Street, the Parade made its final turn west to end at 7th Avenue in front of Macy’s Herald Square.

The crowds erupted with delight as Santa Claus came to town.