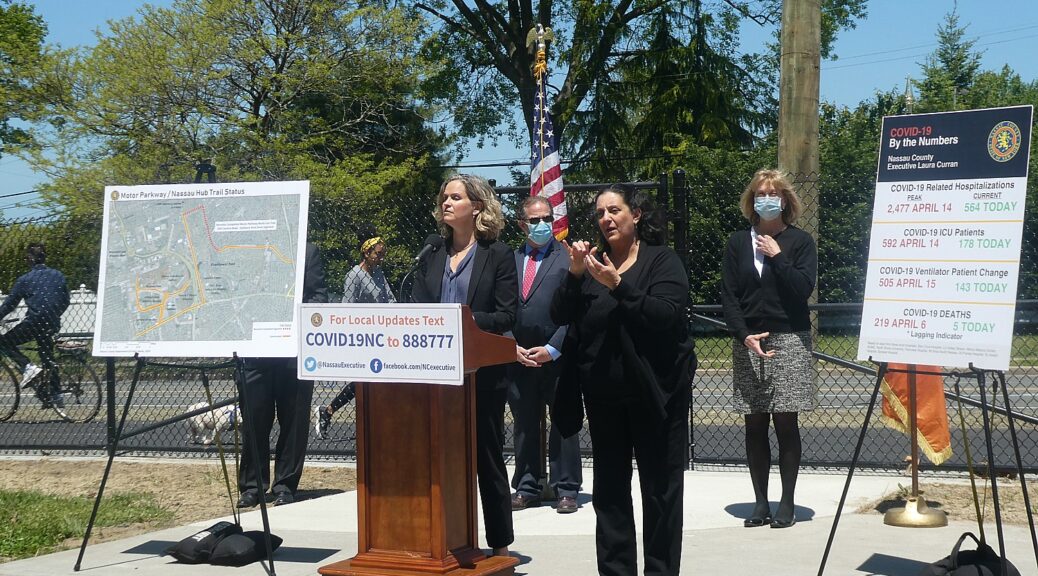 Nassau County and Suffolk Counties are expected to meet the state’s metrics to reopen by next week, New York State Governor Andrew Cuomo said, even as the counties, and New York State move forward with reopening beaches, parks, golf courses, tennis and marinas this Memorial Day weekend, and will honor the fallen on Memorial Day with car parades and a televised wreath laying ceremony.

State beaches, including Jones Beach, are open, while Nassau County beaches will reopen to residents. Beaches are limiting capacity to 50 percent, through limiting parking, and social distancing and rules regarding wearing a mask in public and when 6-feet separation cannot be maintained, are in place.

The Bethpage Memorial Day Air Show that traditionally takes place at Jones Beach State Park will go on “virtually” on the airshow’s web page.  Nassau County will conduct an auto parade and a small wreath-laying ceremony at the Veterans Memorial within Eisenhower Park; the Memorial Day events will be televised beginning at 9:30 am.

Meanwhile, Nassau County Executive Laura Curran encouraged residents to take advantage of the county’s expanded biking/walking/recreational trails. Speaking at Eisenhower Park, showcased the newly completed 1.4 mile expansion of the Motor Parkway Trail, a multi-use trail that currently spans from Hofstra University, to Museum Row, to Eisenhower Park. The expansion was completed in time for National Bike Month, which runs through the month of May.  The trail serves as a recreational connection of 11 continuous miles through Nassau County for hikers and bicyclists, directly serving the Nassau Hub area. Curran said that ultimately, the county’s Department of Public Works in conjunction with the Trust for Public Land, will extend the trail to connect with Bethpage State Park, where there is a stunning 15-mile long bikeway, and will eventually reach to the Nassau-Suffolk line. The bike paths offer an alternative to using an automobile.

Indeed, the Motor Parkway was built by William Kissam Vanderbilt as the first roadway specifically designed for automobile use only. It hosted the first international automobile race in the United States, 112 years ago. Howard Kroplick, a car collector and historian who owns the 1909 Alco “Black Beast” which twice won the Vanderbilt Cup race.

Additional biking trails throughout the County can be found on an interactive map on the County’s website at: www.nassaucountyny.gov/biketrailmap.

Nassau County, being contiguous with New York City, has been a hotspot for coronavirus, but the County executive pointed to positive metrics, including the most critical one, the number of deaths falling from peaking at 219 in a single day (April 6) to five; the number of new cases a day went from a peak of 2477 hospitalizations to 564 today; from 592 ICU patients at its peak, April 14, to 178 today.

Residents have “quarantine fatigue” she said, which is why opening outdoor recreation is so important. She said that nonprofit venues, like Old Westbury Gardens, the Planting Fields, the Bailey Arboretum, also can be opened safely, limiting capacity, in order to give people more things to do.

Nassau County’s economy has been decimated by the pandemic and the lockdown. Curran said.

She warned of a collapse of downtowns and the county’s small businesses.

“We see businesses suffering, lay offs,” she said. The county budget,  which depends for 40 percent of its revenue on sales taxes, expects a 20 percent decline in those revenues – a loss of $438 million out of a $3.5 billion budget. The county is projecting a $384 million deficit.

She insisted the county has no intention of furloughing workers. “We have the best employees. We have a lean operation. I will stand by (our workers). Think of everything they have done –the  DPW, police, health, consumer affairs – all going nonstop, serving residents. We need help from the federal government.”

The county, she said, has so far received $108 million from federal aid, but the county’s payroll is $80 million a month.

Consequently, the state’s new focus on getting funding to small businesses will be a boon to Nassau.

“Small business is a priority,” Governor Cuomo said at his May 22 coronavirus briefing. “The federal government’s small business assistance program has run out of money. Small businesses have taken a beating – they are 90% of New York businesses, and facing the toughest challenges. The economic projections are frightening” – more than 100,000 nationwide are estimated to have shut permanently since the pandemic escalated in March. Minority- and women-owned businesses have been especially disadvantaged by the federal program.

Cuomo announced the state was initiating its own small business relief program which will make available $100 million in New York Forward Loan Fund (NYFLF), with a focus on minority- and women-owned businesses with 20 or fewer employees and less than $3 million in gross revenues, that have not received federal support (https://esd.ny.gov/economic-recovery-covid-19-loans-small-businesses).

The state also is permitting the staging for construction projects in anticipation of the county reopening.

The lag in reopening the county has also hurt real estate sales, Curran said. New Jersey and Connecticut are seeing a boon in New Yorkers looking to escape the city for suburbs.  “We don’t want to lose out. We have all price ranges here.”

Meanwhile, Curran announced that the Nickerson Beach cabanas will be open for the summer season on June 21.

“The Cabanas at Nickerson are a beloved tradition of our County’s beach culture and for many it wouldn’t be summer without them. I am glad we are able to return a tiny of bit of normalcy to our residents and allow them to enjoy this amenity along with our beautiful south shore beach.  We will have new guidelines in place to ensure that people are able to enjoy the cabanas in a safe way,” said Nassau County Executive Laura Curran.

Nickerson Beach has long offered cabanas for rent during the summer season on the eastern and western ends of the park. Each year, a lottery is held to determine eligibility for available spots. There are 498 cabanas and 147 cabinettes. The County released directives to ensure all renters can utilize the cabanas safely while abiding by social distancing guidelines.  The County will be monitoring compliance of these rules.

Meanwhile, the Governor is looking to allow religious centers to conduct services, limiting participation and requiring social distancing, and is also looking to for a return of professional sports but without fans in arenas.

Cuomo has insisted that testing, tracing and isolation are key to reopening without triggering new spikes in contagion that could force the economy to shut down again. He encouraged anyone to get tested and announced a new pilot program with 52 independent pharmacies to conduct 7000 tests per week.

“New York is doing more testing than any other state, any other nation.” He said that so much testing is available that many of the places are doing thousands fewer tests a day than they can accommodate.

If you have any symptoms or feel you have been exposed to someone with COVID-19, he urged, go to coronavirus.health.ny.gov  to find out where to go for a test.

The state has mounted the most aggressive contact tracing program, funded by Bloomberg Philanthropies and developed by Johns Hopkins.

Cuomo said New York would share the software and training program with any state that requests it, through the National Governors Association, at no cost.

Cuomo stressed the importance of wearing a mask as key to preventing a resurgence of coronvirus outbreaks that could once again shut down the economy. As proof, he notes that doctors and nurses in the Emergency Room, first responders and frontline workers have lower rates of the infection than the general population because they wear masks.  The state has mounted a video contest for a public service announcement. Five finalists have been selected. To vote (by May 25) go to coronavirus.health.ny.gov/wear-mask. The winner will be unveiled on May 26. In just 2 ½ days, some 92,000 voted.

While there won’t be an actual Bethpage Air Show at Jones Beach, you can see photo highlights of past shows here: 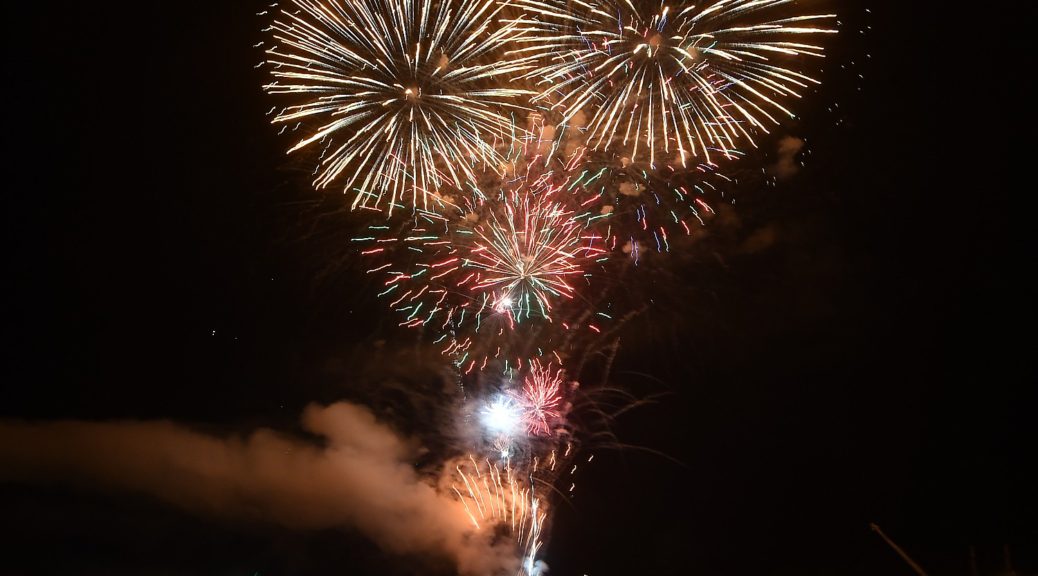 Town of North Hempstead Supervisor Judi Bosworth and the Town Board hosted its annual the Memorial Day Fireworks and Commemoration Ceremony at North Hempstead Beach Park on Saturday, May 26.

“Each year we look forward to hosting our Memorial Day Fireworks Commemoration and Fireworks at North Hempstead Beach Park,” said Supervisor Bosworth. “This event serves to pay tribute to our veterans, active duty military personnel and those who have made the ultimate sacrifice fighting for our freedom.”

A solemn and respectful commemoration ceremony attended by elected officials from the town, state and local villages, was followed by dazzling fireworks display by Santore Fireworks, musical entertainment from Wonderous Stories and special guests, including recent Rock and Roll Hall of Fame inductee Denny Laine. After the fireworks, there will be a DJ performance.

During the ceremony, students from Carle Place High School sang the National Anthem and Cub Scouts from Pack 221 led the Pledge of Allegiance. 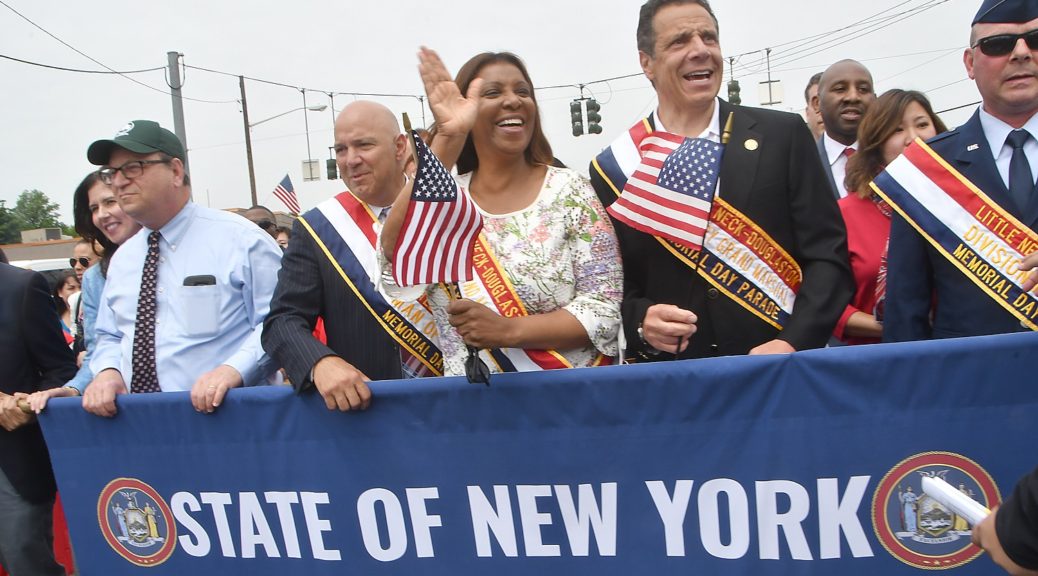 This year’s parade commemorated the centennial of World War I,  65th year since the Korean War ceasefire, 50 years since 1968, the bloodiest year of the Vietnam War. Grand Marshal Brigadier General William Seely, USMC representing the Department of the Navy, the featured branch,  “protecting our shores for 243 years”. The Honorary Grand Marshal was Deborah Crosby, who in 2015, retrieved the remains of her father, Frederick Peter Crosby, USN, from Vietnam.

“At a time when this country is so divided, when there is tension, we have a day where we can come together and remember what our freedom, our democracy is all about.

“This Memorial Day, as we spend time with friends and loved ones, we remember those New Yorkers, from the North Country to Staten Island, who gave their lives for our nation, our values, and our way of life. Our nation’s armed forces have displayed extraordinary courage and made unimaginable sacrifices answering the call to serve, and we owe our eternal gratitude to them and their families.”

“On behalf of all New Yorkers, I extend my sincerest thanks to the brave men and women who have served and continue to serve, and honor those who made the ultimate sacrifice.  On this day – and every day – we commemorate those selfless heroes who laid down their lives to protect our freedom and our democracy.”