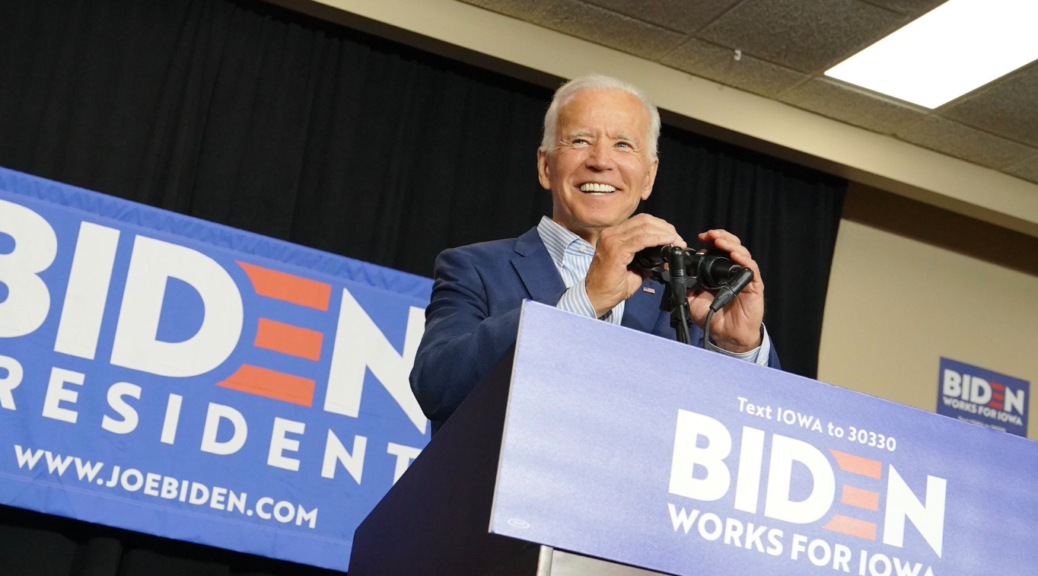 Celebrating the Fourth of July with Iowans in Marshalltown, Vice President Joe Biden, campaigning for the Democratic nomination for President, expressed what the holiday is really about and how Donald Trump doesn’t get it. Here is his speech, as prepared for delivery, with segments highlighted:

Ladies and gentlemen, it’s great to be back in Iowa celebrating the independence of our country and the incredible promise of the American future.

243 years ago, a group of rebels in Philadelphia pledged their lives, their fortunes, and their sacred honor to a revolutionary idea—to the self-evident truth that all men—and women—are created equal.

And ever since then presidents and patriots have gathered together on the 4th, as we are gathered today, to reflect on the greater meaning of our American experiment.

In 1821, just decades after revolution, John Quincy Adams proclaimed: “[America’s] glory is not dominion, but liberty. Her march is the march of the mind.”

In 1861, Abraham Lincoln invoked the Declaration to make the case for the Civil War, reminding Congress that it would be: “a struggle for maintaining in the world that form and substance of government whose leading object is to elevate the condition of men; to lift artificial weights from all shoulders; to clear the paths of laudable pursuit for all.”

In 1962, deep in the grip of the Cold War, Kennedy made the pilgrimage to Independence Hall to declare that: “this Nation—conceived in revolution, nurtured in liberty, maturing in independence—has no intention of abdicating its leadership  in that worldwide movement for independence to any nation or society committed to systematic human oppression.”

Three different presidents, of three vastly different eras, united by their faith in the power of the idea that is America. Constant in their dedication to the pursuit of humankind’s highest ideal—liberty.

What, I wonder, will Donald Trump say this evening when he speaks to the nation at an event designed more to stroke his ego than celebrate American ideals?

Will he speak to the example America must set to inspire the world? Will he offer a robust defense of the democratic values that have always been our strength in times of crisis?

We all know the answer to that. Donald Trump is incapable of celebrating what makes America great—because he doesn’t get it.

He cannot distinguish between our Allies and our adversaries—because he does not grasp that America is the “march of the mind” toward greater openness, greater understanding, greater human freedom to pursue lives of meaning and fulfillment.

And if we give Donald Trump eight years in the White House he will forever and fundamentally alter the character of this nation. We can’t let that happen.

Trump’s embrace of dictators and strongmen is a fundamental rejection of everything our founders wrote into their Declaration.

Vladimir Putin in Russia, Kim Jong Un in North Korea, Mohamad bin Salman in Saudi Arabia—their drive to concentrate greater and greater power in their own hands and to silence their opposition, including through brutal assassinations—that is the death of liberty.

Last week, Putin gave an interview where he crowed: “the liberal idea has become obsolete.”

Trump thought he was talking about Democrats in California. Not a joke.

Well, I’m here to tell Vladimir Putin, and Donald Trump, and anyone who needs to hear it:the liberal idea is the American idea. And it will never be obsolete—not as long as there remain patriots committed to the higher ideals of life, liberty, and the pursuit of happiness.

The Free World is an American design. We created it, together with our democratic allies in Europe and in Asia after World War II, to hold in check the abuse of power by any one nation, and to affirm a collective defense, open economies, and human rights.

The Free World drove the march of democracy, prevented a third great war, protected the territorial integrity and sovereignty of small states, allowed unprecedented economic growth and development, and advanced basic human rights and fundamental freedoms in every corner of the world.

Ours is a community of values that stands in opposition to all who seek to profit by the oppression of others.

That’s why Putin wants to see it destroyed. That’s why he’s actively working to tear apart our democracy.

Ladies and gentlemen – America is the heart of the Free World—and we must defend it.

That is how the Fourth of July is best honored – by remembering that our Declaration is first and foremost a call to arms, in defense of liberty.

Donald Trump doesn’t get that either.

My liberty, depends on yours. Our liberty as a nation rests on our ability to ensure equal access, equal opportunity – not just for our own children, but all our children.

We have to take on the inequalities in our system that are causing too many today—
in America and around the world—to question their faith in the ability of democracy to deliver for them.

It’s not enough to be for political equality—we have to be for economic fairness as well.

It’s not enough to be against the way Donald Trump conducts himself—the way he assaults the dignity of women, people of color, immigrants, LGBTQ individuals—we have to be against his policies that are further entrenching economic inequality in this nation.

That are rigging the system against the middle class.

That too is an attack on our democracy—on our liberty.

That’s the message I’ve been taking all across this nation.

And it’s all the more clear today – on the day we celebrate our independence—this country wasn’t built by Wall Street bankers and CEOs and hedge fund managers.

It was built by you. By ordinary Americans – given half a chance – doing extraordinary things. That’s the history of the journey of America.

My dad used to have an expression. He’d say a job is about a lot more than a paycheck. It’s about dignity. It’s about respect. It’s about one’s place in the community. It’s about being able to look your child in the eye and say everything is going to be ok.  And mean it.

But today so many people can’t do that. That’s what we have to change. That is my north star.

The moral obligation of our time is to rebuild the middle class. And this time, everybody comes along – no matter their race, gender, ethnicity, religion,who they love or where they live or whether they have a disability.

For me, it’s all about restoring the dignity of work – being able to provide security and joy for your family.

But how can a person’s dignity be maintained if they can’t afford to care for a sick child  or a family member because of a pre-existing condition – or because they’ve reached a point where their health insurer says “no more?”

I can’t imagine what Jill and I would have done with Beau if we couldn’t get the best care to ease his pain and suffering while dealing with an incurable disease.

How can a parent maintain their dignity if their talented and qualified child wants to go beyond high school to trade school or community college or college, but they can’t afford to get them there?

I remember how my father felt when he told me the bank wouldn’t give him a loan to help me go to college. He said, “I’m so ashamed.” I got there – but I’ll never forget that look on his face.

They’re squeezing the life out of workers. They’re making it harder for you to bargain for your personal worth as well.

40% of workers have to sign non-compete clauses at some point in their careers.

These non-compete agreements have one purpose: to hold down the ability of workers
to bargain for themselves and to keep their wages low.

And why do companies classify so many low-wage workers as managers?

So they can get out of paying overtime and take more in profits for themselves. That cost more than 4 million hourly workers $1.2 billion in lost wages last year.

And speaking of overtime – it’s long past time we make a $15 minimum wage at the federal level.

It’s time we started to reward work over wealth in this country.

Let me ask you something.

The stock market is roaring. Do you feel it?

Or how about that big tax cut passed by Trump and the Republicans? Did you feel it?

That tax cut exploded the deficit by some $2 trillion – and now the Republicans are using it as an excuse to go after the social safety net.

Let’s not kid one another. If Trump and the Republicans win in 2020 – they’re coming after Medicare and Medicaid and Social Security.

They’ve already said it.  And we can’t let that happen.

So, we need to reverse the Trump tax cuts on the super wealthy. And then we need to get rid of the capital gains loophole.

A just economy—an economy that advances liberty for all—isn’t one where the super wealthy pay lower tax rates than teachers and firefighters.

The Fourth is also a reminder of an important lesson we learned early in this county.

As Benjamin Franklin supposedly said at the signing: “We must all hang together, or most assuredly, we shall all hang separately.”

Folks, we need to unify this country. We have to overcome this status quo of division—that’s the only way we’ll be able to get anything done.

And we can do it without compromising our principles. Marshalltown knows that better than anyone—what do you do when disaster strikes? You come together.

Mr. Mayor, how did you begin rebuilding after that God-awful tornado? By working together with the city council and the local businesses.

It didn’t matter whether folks were Democrats or Republicans then—all that mattered was getting Marshalltown back up and running.

It goes to show that all that stands in our way is a broken political system.

Folks, for all our problems, I’m more optimistic today than when I got elected to the United States Senate as a 29-year old kid.

And here’s why: We’re better positioned than any nation in the world to lead the 21st Century.

We have the strongest military in the world. We have led not by the example of our power, but by the power of our example. The most productive workers among major world economies. North America is energy independent. We have the world’s greatest research universities.

No other nation in the world can match us. The only thing that can tear America apart is America itself.

The only thing that would make the liberal idea obsolete is if Americans walked away from liberty itself.

Everybody knows who Donald Trump is.

This July 4th, let’s remind the world who we are.

This is the United States of America.

This is the nation that willed ourselves into existence with nothing but faith in ourselves and in the power of an idea.

There’s not a single thing we can’t do – together.

God bless all of you. May God protect our troops.