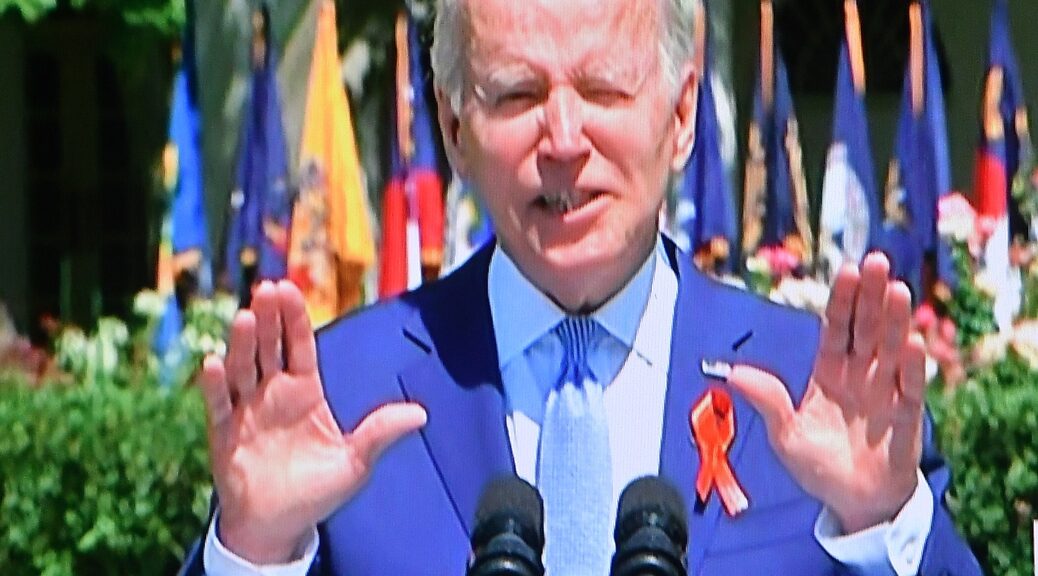 There is only so much a President who honors the Constitution can do unilaterally to reduce gun violence, especially faced with a radical, activist, reactionary Supreme Court and a paralyzed Congress. President Joe Biden has already achieved a landmark, bipartisan Safer Communities Act, but acknowledges that much more has to be done. Nonetheless Biden has signed 21 executive actions to reduce gun violence. Not enough? Elect more legislators at local, state and federal level who will pass sensible gun violence reform, including banning assault weapons and high-capacity ammo clips: This is from the White House:

The Biden Administration will continue to use all of the tools at its disposal to address the epidemic of gun violence. The President’s FY 2023 budget proposes $32 billion in additional funding to fight crime, including $20.6 billion in discretionary funding for federal law enforcement and state and local law enforcement and crime prevention programs, an increase of 11% over FY22 enacted ($18.6 billion) and 18% over FY21 enacted ($17.5 billion).

But there is so much more that can and must be done to save lives. The President will continue to urge Congress to take further legislative action to keep dangerous guns out of dangerous hands, including a ban on assault weapons and high-capacity magazines, strengthening background checks, and enacting safe storage laws.

Below are 21 ways the Biden Administration has already used executive action to make our communities safer:

Keeping Especially Dangerous Weapons and Repeat Shooters Off Our Streets

1. The Justice Department issued a final rule to rein in the proliferation of ghost guns, which are unserialized, privately made firearms that are increasingly being recovered at crime scenes.

Keeping Guns Out of the Wrong Hands

4. The Justice Department published model extreme risk protection order legislation to make it easier for states that want to adopt these red flag laws to do so.

5. The Justice Department issued the first volume of its new, comprehensive report on firearms commerce and trafficking.

6. The Justice Department announced a new policy to underscore zero tolerance for willful violations of the law by federally licensed firearms dealers that put public safety at risk.

8. The Department of Veterans Affairs (VA) launched a new paid media campaign featuring a series of public service announcements to reinforce the key message that a simple gun lock can save lives.

9. The Departments of Defense (DOD), Health and Human Services (HHS), Homeland Security (DHS), Justice (DOJ), and Veterans Affairs (VA), as well as the Office of Emergency Medical Services within the Department of Transportation (DOT), announced that they will jointly create a plan for addressing lethal means safety awareness, education, training, and program evaluation.

11. The President called for cities and states to use American Rescue Plan funding to reduce gun crime and other violent crime, including by investing in community violence interventions and prevention. Through May 2022, $10 billion in American Rescue Plan funds had been committed to public safety and violence prevention – including at least $6.5 billion in State and Local funds committed by more than half of states and more than 300 communities across the country.

12. Five federal agencies made changes to 26 different programs to direct vital support to community violence intervention programs as quickly as possible. For example:

• The National Institutes of Health announced funding through its Firearm Injury and Mortality Prevention Research grants for four community violence programs – including a place-based strategy involving repurposing vacant lots in Detroit, an evaluation of READI Chicago, a burnout prevention program for violence interrupters in Chicago, and a hospital-based violence intervention program focused on youth in Virginia.

• The Justice Department announced $187 million for states and $85 million for localities through the Byrne JAG Program to support coordinated violence prevention and intervention; the Department explicitly encouraged the use of these funds for CVI.

• The Department of Housing and Urban Development published a guide explaining to localities how Community Development Block Grants – a $3.4 billion annual funding stream –can be used to fund CVI strategies.

• The Department of Education released a letter to state school associations on how 21st Century Learning Centers funds and Student Support and Academic enrichment programs – both billion-dollar formula grant funding streams – can be used to fund CVI strategies in schools.

13. The U.S. Department of Health and Human Services hosted a webinar and published information to educate states on how they can use Medicaid to reimburse certain community violence intervention programs, like Hospital-Based Violence Interventions. Last year, Connecticut and Illinois enacted legislation that allows Medicaid to reimburse providers for hospital-based violence prevention services – the first two states in the country to pursue this approach. According to reporting by USA Today, “[t]he idea has been in the works for years, advocates say, but not until the Biden administration signaled that states could – and should – use Medicaid dollars to support these violence prevention programs have state lawmakers stepped up.”

15. The Justice Department announced $139 million in grants to local law enforcement that will put over 1,000 police officers on the beat through the COPS Office Hiring Program.

17. The Department of Labor awarded $89 million through its Youth Build program to provide pre-apprenticeship opportunities for young people ages 16-24.

18. The Department of Labor awarded $20 million through its Workforce Pathways for Youth program to expand workforce development activities that serve youth ages 14-21 during “out of school” time (non-school hours).

19. The Department of Labor awarded $85.5 million to help formerly incarcerated adults and young people in 28 communities transition out of the criminal justice system and connect with quality jobs.

20. The Department of Labor awarded $25.5 million in Young Adult Reentry Partnership grants to organizations that will help provide education and training services to young adults between 18-24 who were previously involved with the justice system or who left high school before graduation.

21. The U.S. Department of Health and Human Services (HHS), through the Family Violence Prevention and Services Program, awarded nearly $1 billion in American Rescue Plan (ARP) supplemental funding to support services for survivors of domestic violence and sexual assault and their children.