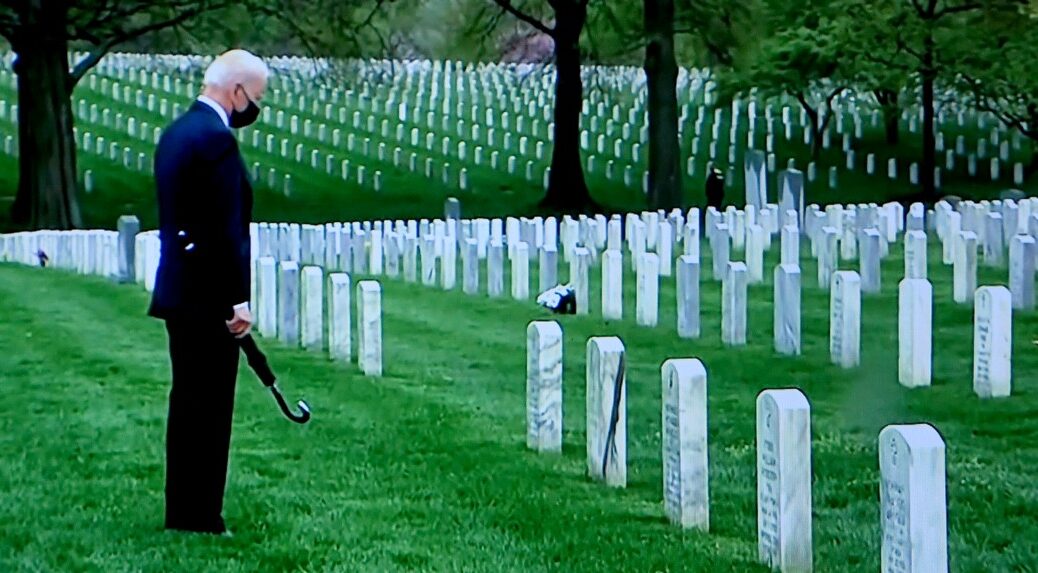 All too often, especially in the Trump years, veterans and active military have been used as props and as pawns to achieve personal and political gain. Trump demeaned Senator John McCain’s heroism as a prisoner of war in Vietnam and later called those who made the ultimate sacrifice for their country, “losers and suckers” and repeatedly questioned the intelligence of those who serve and couldn’t be bothered to visit the graves of Americans who died in World War I in a cemetery while in France.

I often have problems each Veterans Day and Memorial Day because these events shroud the horrors of war in glory – necessary because otherwise no one would sign up. And I have often warned about the difference between lying the nation into war as George W. Bush did to invade Iraq, and Kennedy, Johnson and Nixon did during Vietnam, using war for political gain, as Reagan did in invading Grenada, being used by callous business interests to make their fortune, like World War I, and a justified war like World War II.

This Veterans Day, November 11, 2021, Biden’s Proclamation is genuine and speaks to this administration’s commitment: “Our Nation has only one truly sacred obligation:  to properly prepare and equip our service members when we send them into harm’s way and to care for them and their families when they return home.” — Karen Rubin, news-photos-features.com

BY THE PRESIDENT OF THE UNITED STATES OF AMERICA

For generations, millions of Americans have answered the call to serve — taking the sacred oath to defend and preserve our Nation’s ideals of liberty and democracy.  These patriots represent the best of us.  On Veterans Day, we honor their service, dedication, and valor and are forever grateful for their sacrifice.

Our Nation has only one truly sacred obligation:  to properly prepare and equip our service members when we send them into harm’s way and to care for them and their families when they return home.  For our 19 million veterans, that means ensuring that they have access to the support and resources for a future of security, opportunity, and dignity.  This is even more important as we continue to recover from the global COVID-19 pandemic.

Our obligation to support our Nation’s veterans and their families is personal for me and the entire Biden family, and I remain committed to ensuring that every veteran receives the care and support they have earned.  The recently passed bipartisan Infrastructure Investment and Jobs Act will create millions of good jobs for veterans and grow opportunities for veteran-owned businesses. My Build Back Better framework also prioritizes improvements to VA health care, ensuring that every veteran — including our often-underserved female and LGBTQ+ veterans — receives competent, world-class health care through the Department of Veterans Affairs.  Last month, the White House Gender Policy Council released the first-ever United States Strategy for Gender Equity and Equality, which included the unique needs and contributions of women service members and veterans.  And the Department of Veterans Affairs is also working to get every eligible veteran the information and opportunity they need to register and vote, protecting their voice in the democracy they fought to preserve.

Ensuring veterans have timely access to services and benefits is at the center of my Administration’s commitment to fulfilling our sacred obligation.  This includes addressing the adverse health effects of service-related exposures.  In August, the Department of Veterans Affairs announced it will begin processing disability claims for respiratory conditions connected to exposure during military service in Southwest Asia and other areas.  My Administration also added three conditions to the list of those presumptively associated with exposure to Agent Orange, ending the long wait for disability benefits for many Vietnam era veterans.  In the coming months, we are committed to taking additional action to address potential adverse health effects associated with military environmental exposures.

So many of our veterans carry the scars from their service — both visible and invisible — and it is our Nation’s responsibility to help them heal. Too many veterans and service members have considered suicide or taken their own lives, and addressing this tragedy is a national responsibility. That is why I have made military and veteran suicide prevention a top priority, and earlier this month, I released a new comprehensive, cross-sector public health strategy to reduce military and veteran suicide. Implementing this approach will unite us around a common mission and accelerate meaningful improvements in suicide prevention programs, helping us live up to our sacred obligation to those who have served in our Nation’s Armed Forces.

Fulfilling our Nation’s promise to our veterans and military families, caregivers, and survivors is not only a moral imperative — it is crucial to our national security and to maintaining the finest military the world has ever known.  We are a Nation that keeps our promises.  That is why my Administration is dedicated to a whole-of-government approach in responding to the needs of our veterans and their families, caregivers, and survivors.

Through the First Lady’s work with Joining Forces — the White House initiative to support veteran and military families, caregivers, and survivors — my Administration is addressing employment and entrepreneurship, military and veteran child education, and health and well-being for veteran families.  Earlier this year, the First Lady met with military and veteran families to learn how we can better support and prioritize their needs, and in September, Joining Forces and the National Security Council released a report outlining the first round of Administration-wide commitments and proposals that support veteran and military families, caregivers, and survivors.  These efforts will honor our sacred obligation to support our veteran families and ensure they receive the resources they need to thrive.

On Veterans Day, we honor our Nation’s veterans, who have given so much to protect our freedoms and the freedom of others around the globe.  They represent the highest ideals of our country.  While we can never fully repay the debt we owe these heroes, we will honor their service and provide them the care and support they deserve. We also salute and show gratitude for all who ensure our Armed Forces remain strong, united, and unmatched…

I encourage all Americans to recognize the valor, courage, and sacrifice of our veterans through appropriate ceremonies and private prayers.  I call upon Federal, State, and local officials to display the flag of the United States of America and to participate in patriotic activities in their communities. And I call on all Americans, including civic and fraternal organizations, places of worship, schools, and communities, to support this day with commemorative expressions and programs.