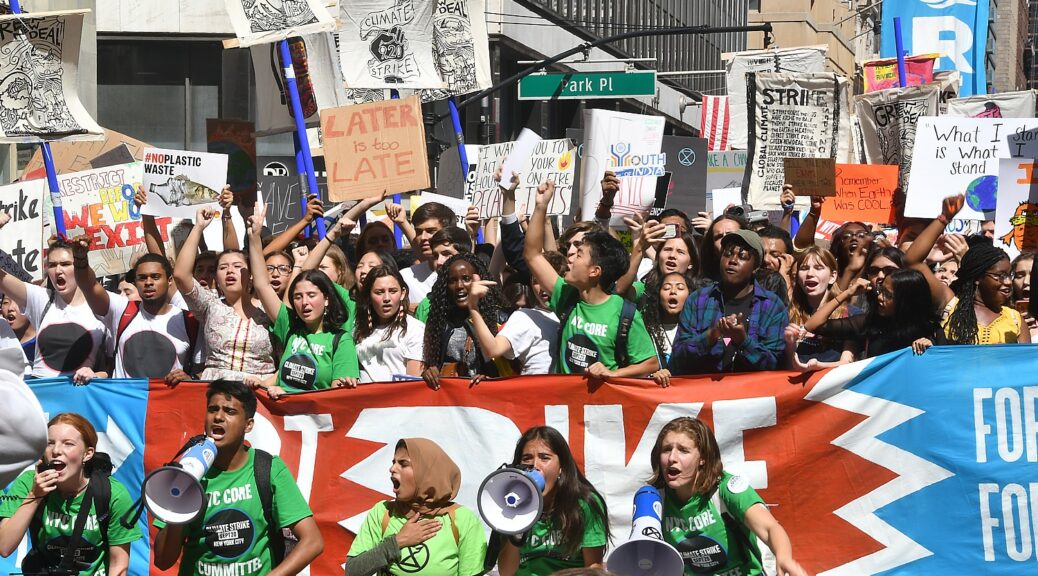 It is being hailed as the biggest climate protest in history: a worldwide climate strike that brought out over 4 million people in more than 2100 events in 175 countries, with some 600 in the United States.

New York’s climate strike brought out more than 250,000 who overflowed Foley Square, marched down to Battery Park, where the global climate leader, Greta Thunberg of Sweden, laid down the gauntlet to the do-nothing world leaders:

“This is an emergency. Our house is on fire,” Thunberg told the cheering crowd. “We will do everything in our power to stop this crisis from getting worse.” Noting that she has withdrawn from school in order to agitate for climate action and to take part in the strikes, children have left school, she said “Why should we study for a future that is being taken away from us. That is being sold for profit.”

“We demand a safe future,” she said. “Is that really too much to ask?”

The link between capitalistic greed and political corruption was very much on view, with signs that called for “Green Jobs Not Dirty Fuel” and even more radical calls to “Save the Planet. End capitalism.”

The demands of the strikers echoed the Green New Deal being proposed: a 100 percent shift away from fossil fuels to clean, renewable energy; shifts to sustainable agriculture, in such a fair and equitable way as to “leave no one behind”; environmental, social, political and economic justice.

“Charge ahead toward  100 percent clean renewable energy, protect habitat and species, hold corporations accountable, have a just transition – leave no one behind,” stated Dr. Ayana Elizabeth Johnson, 39, a marine biologist, policy expert, founder and CEO of Ocean Collectiv, was one of the only adults to give a speech. “We need strong government policies that accelerate transition, a Green New Deal.

She argued that regenerative farming, renewable energy, electrifying transporation necessary to mitigate or reverse the adverse impacts of climate change are already available. “We don’t need new technology.” What is needed is government policy.

“But when there is failure at the national level, localities, states need to step up.” Individuals can make a difference as well: “Plant trees, grow food, plant a climate victory garden, choose foods that are grown regeneratively. Show up, transform culture. Vote in every election. In 2016, 10 million registered environmentalists failed to vote. Do not let that happen again.

“We cannot mobilize at the scale we need unless we face the challenge head on. Focus on solution. Build a coalition so massive, it shifts the status quo. Dig in for the long and beautiful struggle for a new world.”

Capitalism was very much under fire – with the opposition asserting that addressing climate change is akin to throwing the doors open to socialism, or worse, communism, and in any case, that it would be damaging to the economy.

But the case is made by former Vice President Al Gore and others that the fastest growing areas for jobs are in solar and wind power; Democratic candidate Bernie Sanders makes the case that the $1 trillion spent to transition the economy to clean, renewable energy will create 20 million jobs.

And in fact, the economy has already been transformed to new energy: 150 years ago, when coal was discovered in Pennsylvania and emerging industrialists figured out how to turn it into fuel, and petroleum extractors figured out a way to capitalize on the waste product of processing petroleum for industrial grease, gasoline and effectively killed the development of the electric car. That caused a migration of workers- imported migrants and transplants – to new villages, cities and towns based on mining, processing, and manufacturing that had not existed before, often by displacing indigenous people.

The worldwide climate strike comes just ahead of the United Nations Climate Summit to be held Monday, September 23, when countries are expected to present concrete proposals to mitigate and reverse the climb in temperature before global warming has catastrophic impacts on food, water, public health and habitats. The United Nations summit, though, begins with an unprecedented youth climate summit on Saturday, September 21.

The 16-year old Thunberg, who began her climate crusade more than a year ago, holding Friday strike, has become the world’s most recognized climate activist, who has stood her ground against world leaders and the snarky questions of US congressmembers.

The worldwide climate strike actions coincided with the second anniversary of Hurricane Maria’s devastation of Puerto Rico in which 2,975 people died, and New York City strike’s was held jointly with a Puerto Rico Day of Action. It also comes just days after Hurricane Dorian devastated much of the Bahamas, with Trump shutting the door on climate refugees from that catastrophe.