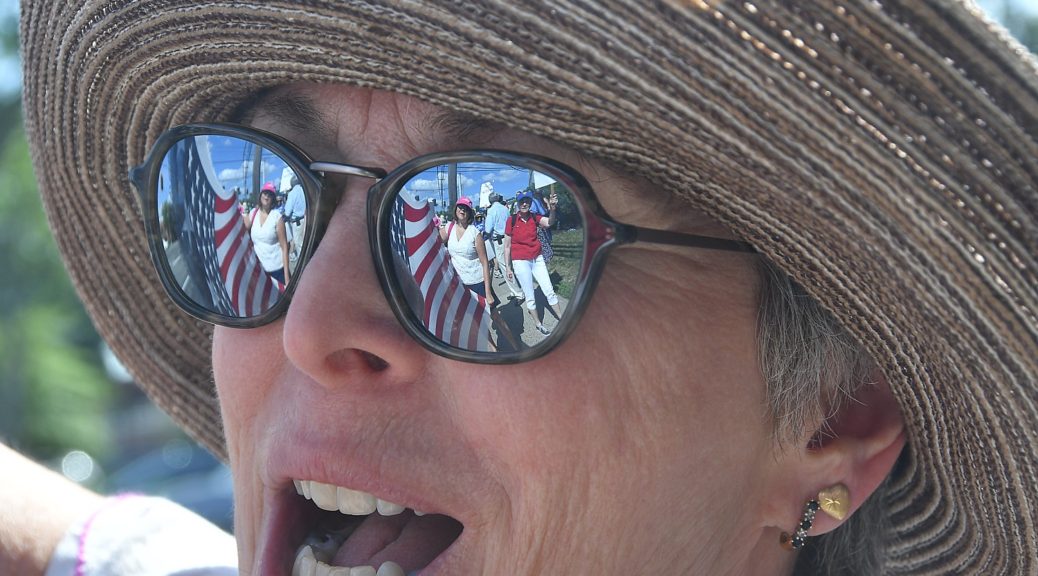 Nearly 200 Long Island activists turned out for a demonstration that took up two corners of the busy Jericho Turnpike and the Walt Whitman Boulevard in Huntington Station to show outrage at the blatant racism and violence that erupted in Charlottesville, Virginia, causing the death of a 32-year old woman and sending 19 others to hospital.

The rally was organized by Ron Widelec of Long Island Activists, in conjunction with Long Island Progressive Coalition, NY 2nd District Democrats (Republican Peter King’s district); Action Together Long Island, Get 2 Work Long Island, Suffolk Progressives. Widelec posted the event on moveon.org and the Indivisible site, where it was listed among many protests, rallies, vigils taking place throughout the metropolitan area, to give people, hungry for a way to express their horror at what befell Charlottesville, a means of expressing their outrage.

Drivers in a steady stream of cars honked in support; a few used hand gestures to express their opposition.

The gathering was also notable for a whole slew of Democratic elected officials and candidates, including New York State Assemblyman Charles Lavine, Assemblyman Phil Ramos 96th district, Brentwood newly elected Assemblywoman Christine Pellegrino (who won her seat for State Assembly in a district that Trump won by 18 points), and Nassau County Legislator Arnie Drucker, who was elected to fill the unexpired term of Judy Jacobs, plus a potpourri of candidates for Huntington and Oyster Bay supervisor and town council.

“Impeach Twitler… Never Again,” read the hand-drawn sign held high by Erica Fladell of Bethpage. “United against hate.” “Silence is deafening and can be dangerous”. “Stop Fascism Now.” were among the other banners.

Indeed, Trump has shown more venomous outrage in tweets against political opponents, the press (“fake news”), even Merck CEO Kenneth C. Frazier, who quit a White House business advisory panel over President Trump’s statement blaming “many sides” for the violence in Charlottesville, Va., as well as the “fire and fury” threat to North Korea that he said was not “tough enough,” than he does against the White Supremacists, KKK and neo-Nazis.

And Trump only belatedly – two days later – acknowledged the murder of Heather Heyer, giving no mention at all to the other 19 victims, while expressing sympathy for two state troopers killed in a helicopter crash and reaffirming his campaign pledge to “restore law and order.”

Indeed, his first statement was a kind of disclaimer of responsibility for these groups who have not just come out of shadows and fringes, but have been emboldened even validated by his ascension.

The protesters who have taken to the streets in hundreds of rallies around the country, took exemption to his statement, “We condemn in the strongest possible terms this egregious display of hatred, bigotry and violence” as hollow by adding “on many sides, on many sides,” as if to equivocate the level of responsibility and source of violence.

The protesters though, saw it differently.

“The hoods are off. They don’t feel the need to cover their faces,” one woman declared. “White nationalism is a political position to have now.”

Indeed, in Charlottesville, former KKK leader David Duke, said, “We are determined to take our country back. We are going to fulfill the promises of Donald Trump. That’s what we believed in. That’s why we voted for Donald Trump.”

The chant on Jericho Turnpike went up:

“No Trump. No KKK

Trump “doesn’t even denounce or condemn these hate groups..but will appoint White Supremacists [like Steve Bannon, Steve Miller, and Sebastian Gorka, who has ties to a neo-Nazi organization in Hungary] to his administration. That’s why we’re here,” declared Liuba Grechen Shirley, founder of NY 2nd District Democrats, to challenge Republican Peter King, who has been staunchly anti-immigrant and anti-Muslim under the guise of national security.

“Some of us are here because our father fought a war against Nazism,” said Virginia McNulty of Plainview. He would be horrified.”

Indeed, though Administration toadies tried to proclaim that Trump had, in fact, denounced racist violence, neo-Nazis took aid and comfort in his remarks, hailing his statement as an endorsement.

“He didn’t attack us,” The Daily Stormer, a white supremacist website, exulted in response to Trump’s statement on Saturday: “Refused to answer a question about White Nationalists supporting him. No condemnation at all. When asked to condemn, he just walked out of the room. Really, really good. God bless him.”

I come up with my own chant:

“No Fear. No Hate

Later, I joined another gathering, this time in the Old Village of Great Neck, in front of the US Post Office.

People came from as far as Levittown, West Hempstead, Whitestone to the Old Village of Great Neck to register their horror and outrage at the blatant show of force by White Supremacists and Neo-Nazis that led to the death of a 32-year old woman in Charlottesville, Virginia. With just a few hours notice, dozens came to demonstrate their somber support of the founding principles and values of America.

The vigil was organized by Karen Ashkenase and David Zielenziger who posted on moveon.org and indivisible sites.

“We are standing in solidarity with Charlottesville. Join us. Bring a candle. We honor the dead, hope for recovery for the injured and demand Trump explicitly condemn alt-Right extremism and violence!”

With just a few hours notice, the vigil had drawn almost 3 dozen who came from as far as Levittown, Bellerose, West Hempstead and Whitestone.

“We wanted Great Neck to hold a vigil… to protest this outrage, killing, violence and Trump,” said David Zielenziger.

He was incensed after Trump failed to denounce White Supremacists, the KKK and the Neo-Nazis who flooded into Charlottesville, even holding a flaming torch march through the University of Virginia campus, to protest taking down a statue of Confederate General Robert E. Lee.

He specifically wanted a demonstration in the Old Village (as opposed to the more trafficked areas like Great Neck Plaza) because the Village of Great Neck, along with Kings Point and Saddle Rock on the Peninsula, voted for Trump in significant majorities.

“For the community to do nothing, was outrageous.”

“Even the skin-heads came from immigrants, and if they don’t realize we’re a country of immigrants – that we’re all here together… I won’t let [Trump’ divide us,” said Joseph Varon of West Hempstead, holding a poster of the Statue of Liberty and a portion of Emma Lazarus’ poem that is at its base, “Send these, the homeless, tempest-tost to me, I lift my lamp beside the golden door!”

The message of the vigil, he added, is that “even though disheartened, we need to act locally, write letters, come to demonstrations, and vote. If you are not part of the solution, you are part of the problem.”

“This can happen openly because of an environment the Trump administration has established: condoning anti-Semitism, bigotry. The environment he created,” said Shelley Sherman of Great Neck.

Compare the protests at Ferguson, Missouri last summer after an unarmed Black man, Michael Brown, was gunned down by police, where a militarized police force came with tanks and tear gas to suppress  Black protesters, while self-proclaimed vigilantes patrolled with assault rifles, she noted. In Charlottesville, the White Supremacists came with assault weapons strapped to their bodies, with helmets and shields and home-made pepper spray, and flaming torches.

“The Trump Administration created an environment that has enabled people to say, ‘Heil.’” Indeed, after Trump won election, Richard Spencer, an alt-right leader, at a Washington DC conference led the crowd in “Hail Trump” cheers and Nazi salute.

They each brought hand-written signs. Christina’s read, “I can’t believe I’m 70 years odl and I’m still fighting the same hate and racism from the 1950s.”

“The hate, the fact that all of this hatred is made acceptable, when it’s not,” exclaimed Julie Eigenberg of Great Neck. “they are making it acceptable for people to treat each other badly, that they can march through UVA with flaming torches. That’s not free speech. It’s intimidation.”

“I’m fearful it will take so long to undue the damage to our culture,” said Debra Michlewitz of Bay Terrace. “

The next day, Trump came out with a speech clearly crafted for him in which he

“Racism is evil and those who cause violence in its name are criminals and thugs, including the KKK, neo-Nazis, white supremacists and other hate groups that are repugnant to all that we hold dear as Americans,” he said rather begrudgingly, as if in a hostage video. He has expressed no condolence for the 32 year old woman who was killed, nor any concern for the 19 mowed down by James Alex Fields, Jr., of Ohio.

His words were clearly scripted for him – the phrases, let alone the themes, are alien to the way he actually speaks. They were certainly not from his heart, let alone his mind. And they probably were accompanied by a furtive wink-and-nod. His peeps know his true heart.

Eight-year old Sofia’s efforts were not in vain, though. What the protests, did was put Trump and the Republicans on notice, forcing Trump to make this declaration and even forcing Attorney General Jeffrey Sessions to take a stand to prosecute Heather Heyer’s murderer.

While defending Trump’s comments following the car-ramming attack in Charlottesville which took Heather Heyer’s life (he knows better than to cross his leader), Attorney General Jeff Sessions promised the Department of Justice would take “vigorous action” to defend the rights of Americans to protest bigotry.

“Well [Trump] made a very strong statement that directly contradicted the ideology of hatred, violence, bigotry, racism, white supremacy — those things must be condemned in this country,” Sessions said on the TODAY show on Monday. “They’re totally unacceptable, and you can be sure that this Department of Justice, in his administration, is going to take the most vigorous action to protect the right of people, like Heather Heyer, to protest against racism and bigotry.”