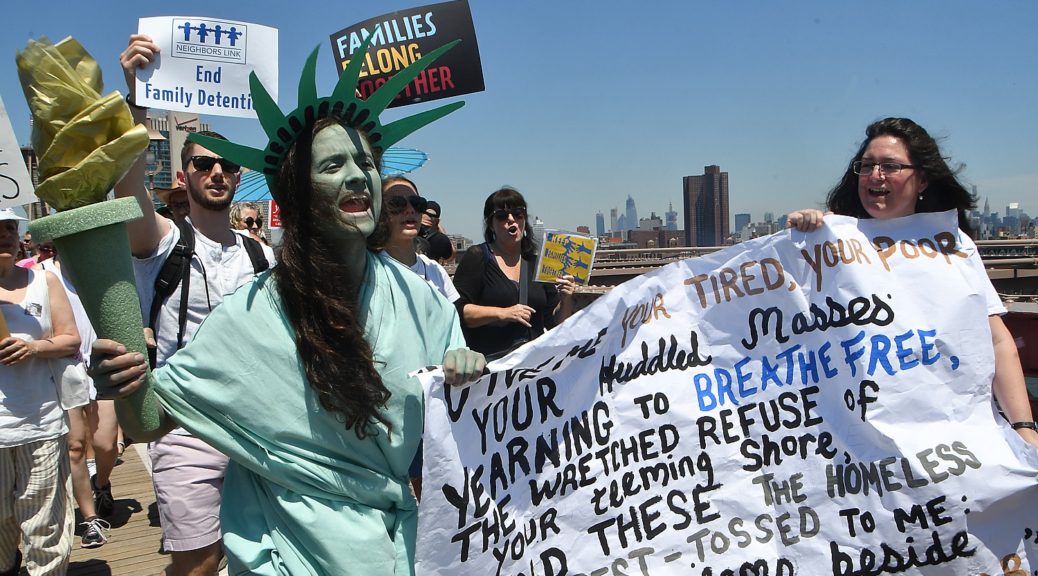 Tens of thousands of New Yorkers gathered at Foley Square in front of the federal courthouse and marched across the Brooklyn Bridge to protest the Trump Administration’s intolerable Zero Tolerance immigration policy that has resulted in thousands of children being forcibly separated from parents making a claim for asylum from violence in Central America.

The Protect Families March and Rally was organized by the New York Immigration Coalition, an umbrella policy and advocacy organization for more than 200 groups in New York State including immigrant rights advocates, advocacy groups, unions, and allies demanding an end to the Trump administration’s cruel and inhumane policies against immigrant families.

New York City Police Department estimated the crowd at 22,000, but there may have been many more than that. The “family-friendly” march was exactly that with scores of families with their small children taking a stand on behalf of other families.

It was one of 700 protests across America on June 30, a National Day of Action.

The Day of Action was the climax to Trump’s incrementally destructive immigration policy, starting with summarily ending DACA protections, then ending legal status for thousands of refugees who have been given shelter in the US for decades and built homes here, stepped up deportation raids that take parents away from children, many of whom are American citizens. Demanding $25 billion to build a wall that no one believes will do anything, and holding the federal budget hostage to that, is the least of it. Trump is also using first the DACA recipients and now the immigrant children as bargaining chips to restrict legal immigration, as well.

The policy of separating children was hatched just weeks after Trump took office, and was announced in April by Attorney General Jeff Sessions as a weapon to deter families from fleeing violence in Honduras, Guatemala and El Salvador. (See: Trump Sees Abuse of Immigrant Children as Winning Political Strategy. What’s Next?)

Here are highlights from the Protect Families march that began at Foley Square, continued over the Brooklyn Bridge and finished with a rally at Cadman Plaza in Brooklyn.

See more from the Protect Families rally at Cadman Plaza.