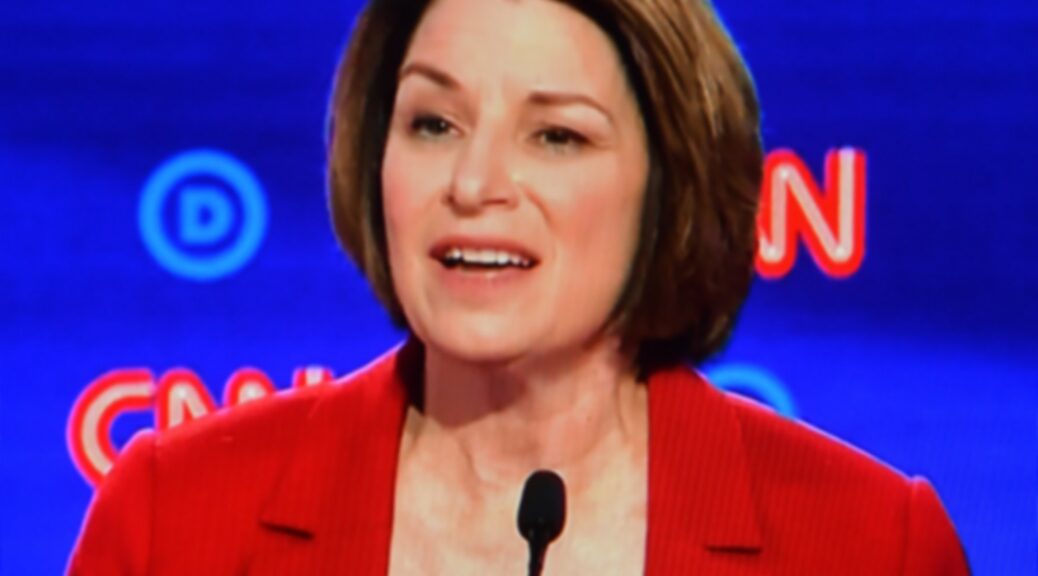 The vigorous contest of Democrats seeking the 2020 presidential nomination has produced excellent policy proposals to address major issues. In a recent poll, Americans have indicated that education is a top issue. Senator Amy Klobuchar released her “Many Paths to Success” Post-Secondary Education Plan.  This is from the Klobuchar campaign:

MINNEAPOLIS, MN — Ahead of her visit to Nashua Community College for an Advanced Manufacturing Facility tour and town hall, Senator Amy Klobuchar released her “Many Paths to Success” Post-Secondary Education Plan.

Senator Klobuchar believes there are many paths to success. Her grandpa worked 1,500 feet underground in the mines, never graduated from high school, and saved money in a coffee can in the basement to send her dad to community college. Her sister didn’t graduate from high school, worked in manufacturing in Iowa, got her GED, went to community college and eventually got a four-year degree.

Today many of the fastest growing occupations require one- and two-year degrees. The Bureau of Labor Statistics projects that there will be 74,000 job openings for electricians over the next 10 years, 68,200 openings for plumbers, and over 137,000 openings for nurses’ assistants. Senator Klobuchar believes we must do more to connect people to an affordable education for the jobs we have available today and tomorrow.

That’s why as President, Senator Klobuchar will focus on championing tuition-free one- and two-year community college degrees and technical certifications, expanding apprenticeship opportunities, respecting the dignity of work by paying people a decent living wage so they can care for and support their families, as well as making it easier for Americans who need help to afford four year degrees.

As part of her Post-Secondary Education Plan, Senator Klobuchar will:

Provide Tuition Free One- and Two-Year Community College Degrees and Technical Certifications, Promote Apprenticeships, and Respect the Dignity of Work

● Provide tuition-free community college and technical certifications. Today many of the fastest growing occupations require one- and two-year degrees. As President, Senator Klobuchar will create a new federal-state partnership to provide tuition-free community college one- and two-year degrees, technical certifications and industry-recognized credentials. The federal government will match $3 for every $1 invested by the state for students who qualify for in-state tuition, are enrolled at least half-time, and maintain satisfactory academic progress. When certain economic indicators show a state has increased financial need, the federal share of the match will increase. To qualify for the federal funding, states will also be required to maintain their spending on higher education, limit the rate of tuition increases and ensure that students can easily transfer their credits to four-year programs. This proposal is based on Senator Baldwin’s America’s College Promise Act and an Obama Administration proposal.

● Connecting students to jobs and ensuring the dignity of work. It is not enough to provide students and workers with an affordable education, we must also connect students to job openings and ensure the dignity of work for the jobs that are available today. As President, Senator Klobuchar will invest in our workers so that everyone who works hard can earn enough to care for and support their family. That means raising the minimum wage, providing child care, and paid family leave and making sure people have a secure retirement. She will also work with high schools, community colleges, universities, businesses, labor unions, trade associations and job training centers to provide information to students earlier in their education about the availability and outlook for jobs in different careers, their expected earning potential, and the necessary educational credentials.

● Invest in apprenticeships. Apprenticeships combine academic instruction with on-the-job training to give students the skills they need to succeed while helping employers create a source of qualified workers. Senator Klobuchar will direct her Secretary of Labor to analyze the use of apprenticeships for In-Demand occupations, launch a nationwide campaign, and expand apprenticeship opportunities and benefits with the goal of doubling the number of apprenticeships to over a million by the end of her first term. She will also work to pass the American Apprenticeship Act, a bipartisan bill she leads in the Senate that would help states create and expand tuition assistance programs for students in pre-apprenticeship and Registered Apprenticeship programs.

● Improve tax incentives for retraining and post-secondary education. Tax credits help make college more affordable for many families, but too often they are not designed to help non-traditional students. As President, Senator Klobuchar will work to pass bills she currently leads in the Senate to allow older students and workers to use tax-advantaged “529” savings accounts for recognized post-secondary credentials and occupational licenses. As President, she will also pass bipartisan legislation she leads in the Senate to remove age-based contribution restrictions for Coverdell education accounts, allowing the accounts to be used for a broader range of career and technical education costs. Both tax incentives would apply to older students and workers pursuing retraining opportunities.

● Provide financial support beyond tuition. For many college students, non-tuition expenses can present a significant hurdle to completing their education. In addition to expanding Pell Grants, which can be used for certain non-tuition expenses, Senator Klobuchar will work with states to establish microgrant programs to help students with necessary expenses if they face unexpected financial hardship. In addition, she will expand categorical eligibility for SNAP benefits for low-income students and support pilot projects to increase the availability of federal housing assistance to students.

● Simplify the financial aid process. The income verification process for the Free Application for Federal Student Aid (FAFSA) can be a significant barrier for low-income students. As President, Senator Klobuchar will work to improve coordination between the IRS and Department of Education to streamline income verification. She will also allow previous year tax forms to be used to avoid complications from income estimates.

● Protect student borrowers and increasing financial literacy. Too many students have been taken advantage of by unscrupulous private lenders. As President, Senator Klobuchar will restore and strengthen rules that allow students who believe they were defrauded by their colleges to apply for loan forgiveness, providing relief to thousands of additional students. She will also establish best practices for student financial literacy and require schools to notify student borrowers of their total loan obligations, estimated interest rate, and expected monthly payment. This proposal is modeled after the bipartisan Empowering Student Borrowers Act, which Senator Klobuchar has co-sponsored in the Senate.

Support Multiple Paths to Success and Invest in Retraining

● Establish a Worker Training Tax Credit. Today businesses are investing less in workforce training, particularly when it comes to lower wage workers who are most at risk of losing their jobs to automation and other emerging technologies. As President, Senator Klobuchar would create a new tax credit for employers that invest in training for workers at risk of being laid off through on-site training programs or provide paid time off for off-site retraining. To qualify for the tax credit, training would have to lead to an industry-recognized credential, certificate, or degree.

● Invest in adult basic education. In her first 100 days as President, Senator Klobuchar will reverse President Trump’s proposal to cut basic education programs for adults, and launch an initiative focused on increasing opportunities for adults to master literacy and basic math skills.

● Promote stackable credentials. Stackable credentials are certifications or occupational licenses that can be combined with additional coursework that will then lead to an associates degree. As President, Senator Klobuchar will encourage states to work with employers, unions, trade associations, and community colleges to develop stackable credentials for In-Demand fields that provide meaningful employment skills while building towards a degree.

● Expand accountable skills-based education. Senator Klobuchar supports finding ways to give students credit for the skills and knowledge they have from previous jobs or military experience. As a Senator, her legislation was signed into law to make it easier for veterans with training to become paramedics and law enforcement officers. As President, Senator Klobuchar will initiate a grant program for skills-based education with strong accountability and transparency standards to make it easier for students to receive credit for skills and knowledge they’ve already acquired.

● Give students returning to school later in life a fair shot. Students should be able to pursue post-secondary opportunities later in life. Senator Klobuchar will allow students who are returning to post-secondary education to requalify for Pell Grants by resetting their Satisfactory Academic Progress (SAP) and to receive additional Pell Grants even if they have reached the Lifetime Eligibility Used (LEU). She will also restore Pell Grant eligibility for incarcerated students.

● Improve GED programs. As President, Senator Klobuchar will work to improve GED programs by linking them to career skills and community college curricula while increasing students’ chances of success through wraparound support services.

Provide All Students Opportunities for Success

● Strengthen and increase affordability for Historically Black Colleges and Universities (HBCUs) and other Minority Serving Institutions (MSIs). As President Senator Klobuchar will invest in HBCUs and MSIs through a new Pathways to Student Success initiative. Participating HBCUs and MSIs will receive federal funding to waive or significantly reduce the first two years of tuition for low-income students at four-year schools.

● Expand and fully support TRIO and GEAR UP. The TRIO and GEAR UP programs help low-income, first-generation college students, and students with disabilities, veterans, homeless youth, foster youth, and individuals underrepresented in graduate education prepare for and succeed in higher education. The Trump Administration has attempted to cut funding for these programs, but as President, Senator Klobuchar will expand these programs and ensure that they are fully funded.

● Ensure veterans have access to the educational opportunities they have earned. Senator Klobuchar has been a champion for expanding and modernizing education benefits for our servicemembers. As President, she will push to reduce the burden of student debt on servicemembers by lowering or eliminating the accrual of interest on student loans during their service. She will also ensure that members of the National Guard and Reserve receive the same GI Bill education benefits as their counterparts in active duty and adjust tuition assistance for members of the National Guard and Reserve to keep the tuition assistance competitive. And to support veterans on college campuses and expand career counseling, Senator Klobuchar will launch and implement a grant program to invest in college veteran education centers.

● Invest in Tribal Colleges and Universities (TCUs). As President, Senator Klobuchar will work to ensure that Tribal Colleges and Universities are fully funded and that TCUs, Alaska Native-serving institutions, Native Hawaiian-serving institutions and Native American-serving nontribal institutions will be eligible for the Pathways to Student Success initiative. She will also build on her work to provide resources for tribal schools so that they can prepare students to be career and college ready.

● Support student parents. Students who have children are more likely to drop out of their educational programs without completing them. As President, Senator Klobuchar will expand the Child Care Access Means Parents in School (CCAMPIS) Program, which provides on-campus child care services. She will also expand the eligibility for the Child and Dependent Care Tax Credit to cover child care expenses while parents pursue postsecondary education and make financial aid calculations fairer for student parents.

To pay for these investments, Senator Klobuchar will raise the capital gains and dividends rate for people in the top two income tax brackets, limit the amount of capital gain deferral allowable through like-kind exchanges, and implement the Buffet Rule through a 30 percent minimum tax for people with incomes over $1 million.