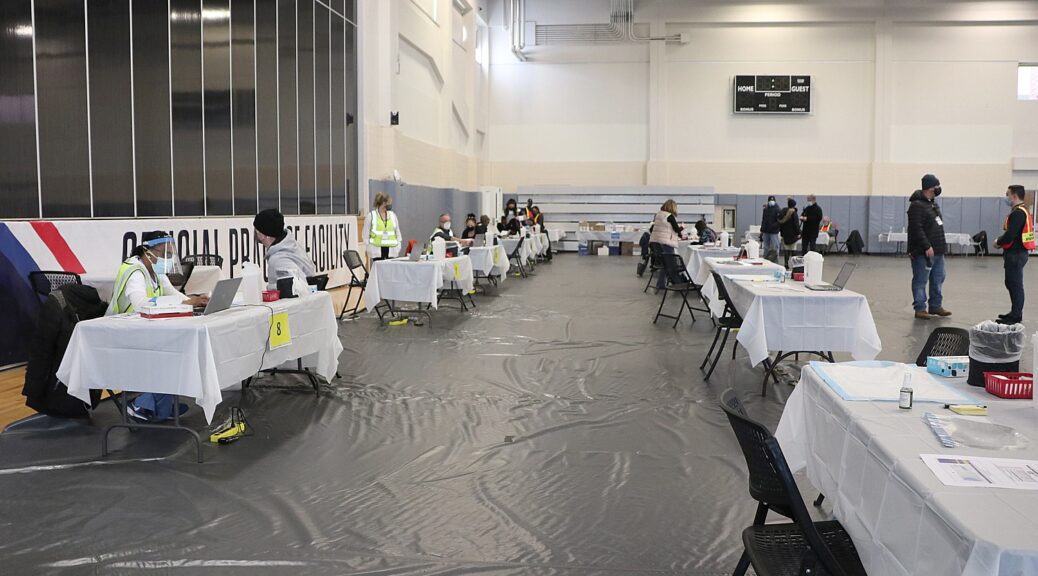 Governor Andrew M. Cuomo announced the  New Yorkers within priority group 1b can now begin scheduling appointments with individual providers, including pharmacies, local health departments, and hospitals, to receive the COVID-19 vaccine. Those now eligible to receive the vaccine include individuals 75 and older, first responders, public safety officers, teachers and other school staff;  in-person college instructors, childcare workers, public-facing grocery store workers, transit workers and individuals living and working in homeless shelters. Eligibility determinations and a list of nearby providers where appointments can be scheduled can all be done through New York’s new ‘Am I Eligible ” app. New Yorkers can begin calling the New York State Vaccination Hotline at 4PM on Monday, January 11: 1-833-NYS-4VAX (1-833-697-4829).

Since federal supply severely limits the ability to distribute vaccine, New Yorkers are encouraged to remain patient and are advised not to show up at vaccination sites without an appointment. New York’s vast distribution network and large population of more than 4 million eligible individuals in this priority group dwarf the vaccine supply coming from the federal government, which is arriving at a rate of approximately 300,000 doses per week. As such, eligible New Yorkers should be prepared to receive an appointment date as far as 14 weeks in the future.

“After ten long months, the expansion of eligibility for additional New Yorkers to begin making their COVID-19 vaccination plan is a light at the end of the tunnel,” said Governor Cuomo. “The vaccine is the weapon that will end the war, and as we continue to prioritize healthcare workers as hospital capacity necessitates, New York is proud to have reached this milestone and we strongly encourage all who are newly eligible to schedule their free vaccination appointment as soon as possible.”

Under New York’s expanded eligibility, the following individuals will now be eligible to schedule a COVID-19 vaccine appointment:

State Fire Service, including firefighters and investigators (professional and volunteer)

Local Fire Service, including firefighters and investigators (professional and volunteer)

Other Sworn and Civilian Personnel

Other Police or Peace Officers

Support of Civilian Staff of any of the above services, agencies or facilities

State Department of Corrections and Community Supervision Personnel, including correction and parole officers

Individuals living in a homeless shelter where sleeping, bathing or eating accommodations must be shared with individuals and families who are not part of your the same household

Individuals working (paid or unpaid) in a homeless shelter where sleeping, bathing or eating accommodations must be shared by individuals and families who are not part of the same household, in a position where there is potential for interaction with shelter residents

Until this point, 2.1 million New Yorkers in priority group 1A have been eligible to receive the vaccine. This includes patient-facing health care and other critical hospital workers, seniors living in nursing homes and assisted-living facilities, and people with disabilities living in congregate settings. Distribution sites were established directly within hospitals, FQHCs, and urgent care clinics to provide direct access to all those eligible. To further accelerate the vaccination rate of priority health care workers, and begin the vaccination of group 1B essential workers and 75-plus year olds, New York has established a network of distribution sites that will supplement the work being done in hospitals to prevent any one hospital from becoming overburdened.

This new network will utilize doctors’ offices, Federally-Qualified Health Centers, county health departments, ambulatory centers and pharmacies to get doses in the arms of eligible New Yorkers. More than 1,200 pharmacies have already committed to participating in this network, with nearly 500 scheduled to come on-line this week. Providers across the state will begin accepting vaccination reservations on Monday, January 11 when a centralized state website goes online that lists nearby providers where appointments can be scheduled. Pharmacies will be provided vaccines for New Yorkers aged 75 and older, while hospitals will continue vaccinating 1a healthcare workers, and local health departments and union-organized efforts will serve essential workers in 1b.

Additionally, the Department of Health is setting up 20 mass distribution sites throughout the state over the next several weeks to support all categories of eligibility. Opening on Wednesday:

Additional sites will be launched in the days to come.

Under this expanded vaccination network, hospitals will continue to prioritize unvaccinated members of 1A: health care workers. Additionally, large union groups, including but not limited to police, firefighters and educators, have been asked to organize plans for vaccinating their members to the extent possible, incorporating coordination and partnership with local health departments. This will enable other providers in the network to focus on New Yorkers over the age of 75, which represents the largest group in 1B at approximately 1.4 million people.