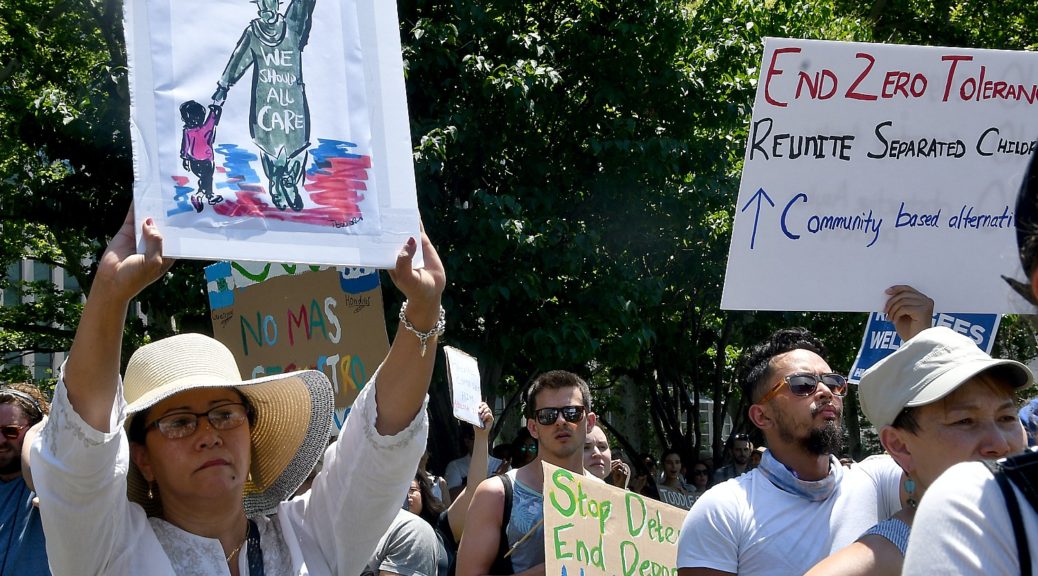 Some 22,000 New Yorkers joined a protest march and rally against the Trump Administration’s “Zero Tolerance” policy of separating children from parents and incarcerating families seeking asylum. The march that started at Foley Square in downtown Manhattan, continued across the Brooklyn Bridge, and finished with a rally in Cadman Plaza in Brooklyn.

Donna Lieberman, Executive Director, New York Civil Liberties Union: “It’s bad enough those who control government would turn their backs on those fleeing violence, turn out people living here for decades, but that the country I love so much could commit such atrocities against children, all in the service of a warped agenda. We won a court order to force the government to reunite families in 30 days. It was an important victory but we know this regime won’t comply unless we force them to…. Take back our country. Fight back in courts, on the streets and damn it, at the ballot box.”

Carola Bracco, Executive Director, Neighbors Link: “Today is not just about immigrant rights, it is about human rights. This is not who we are as a country. This is not a country I recognize. I can’t imagine anything more devastating than having a child forcibly taken, then having to search. From this chaos, strong leaders are emerging, committed to changing course. We are here to fight for liberty, to live with dignity. Together we will change the trajectory of this country.”

Jennifer Jones Austin, Federation of Protestant Welfare Agencies: “Freedom is about saying no to a lie, vetoeing an untruth. Say no to the lies of this administration; veto the untruth of saying separating children is for our own good.

Estela Vasquez, Executive Vice President, 1199 SEIU: “Mobilize, march, protest until we stop this stupid policy of zero tolerance. Scorch Agent Orange in the white House. We are not fooled by a phony executive order. Separating children, incarcerating children is no different from what the Nazis in Germany did in the 1930s, what we did to Japanese in World War II. Zero tolerance for poverty, for police brutality, for inhumanity.”

Hector Figuerola, SEIU: These migrants are running away from the conditions the US created in the first place. 66% of our union are foreign born. “The labor movement has to stand against these attacks on immigrant families. They are not ‘them’. They are us. Fight for children not to be jailed, but free. Stand for families everywhere. This doesn’t end today. For families who suffer loss of a child to police brutality or street violence. Fight for all families. Start with immigrants being dehumanized by this administration. Imagine what it will be if we were to connect the struggle of all the resistence against Trump – labor, women’s movement, those seeking freedom for everyone. Our fight is the fight of people. Let’s fight and let’s win.

Padma Lakshmi, Author and Television Host: I am an immigrant, a daughter of an immigrant single mother. This is an issue of common decency and humanity, defining who we want to be as a nation. This country was built on labor and sweat of immigrants. That’s what makes America great. Trump is sowing generations of hatred.”

Omolara Uwemedimo, Assistant Professor of Pediatrics and Occupational Medicine, Epidemiology and Prevention, Donald and Barbara Zucker School of Medicine at Hofstra/Northwell, a daughter of Nigerian immigrants and a mother of two, described the physical and mental toll that may last a lifetime on children being subjected to the trauma of being forcibly separated and incarcerated. There is also the toxic stress on those living in fear of a government taking undocumented parents away from a family. “Family detention is not a solution, it is child abuse and I am a mandated reporter. I am reporting the Trump Administration for abuse of black and brown children.”

Flor Reyes, DACA Recipient, with her brother, Elvis, described the constant terror of a family of “mixed status,” where parents could be deported while children are DACA recipients or American citizens must fend for themselves.

Perla Lopez, Youth member, Make the Road New York, recalled her flight with her mother, fleeing with five children and her detention. “It was almost 10 years ago but is still traumatic.”

Comedian and actor Amy Schumer: “We were so excited election night when we thought Hillary would be president. Then Hell opened up.”