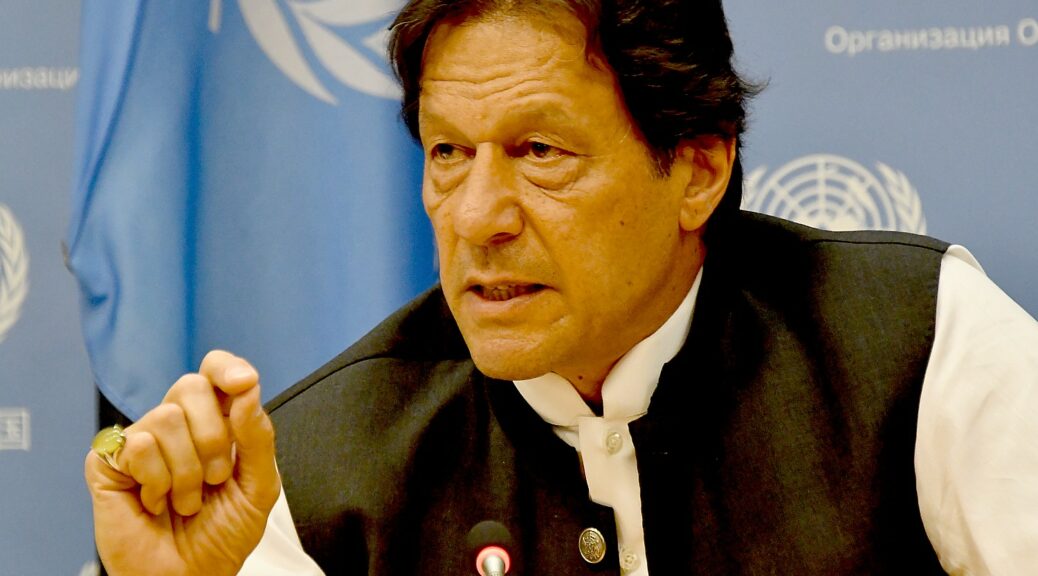 Pakistan’s Prime Minister Imran Khan, at a press briefing at the United Nations General Assembly on Wednesday, September 24, gave a chilling depiction of prospects for Kashmir, whose 8 million inhabitants are under virtual house arrest by India. He noted multiple times that these are two nuclear powers being brought to the brink over the disputed territory, and charged the “rich countries” with ignoring the possibility of what he called a “massacre” or ethnic-cleansing by India because of their craven interest in wooing India’s market of 1 billion people. He reminded the United Nations that it was their Security Council resolution that gave Kashmir their right of self-determination.

“The main reason I came to the UN General Assembly was to highlight highlight what is going on in Kashmir. The world would not know the oppression going on, nor would the world understand that this is just the beginning, it will get worse, and there is a potential that two nuclear armed countries will come face to face at some stage.”

“For 50 days, the Kashmiri people have been locked down –a news black out.” He said there have been mass arrests, “the entire leadership of Kashmir, even leaders who were pro-India, even those Kashmiri leaders are now in jail somewhere in India.

“And this nonsense that this is part of India so the world should stay out – just to remind, there are 11 UN Security Council resolutions that recognize Kashmir as disputed territory, which gave the right of Kashmir people of self-determination through plebiscite to decide their destiny – for 70 years this plebiscite never took place, then unilaterally [the Modi] government has annexed Kashmir – revoked article 370.”

But, he said, he fears what is next: that the Modi government will change the demography of Kashmir. “Changing the demography of an occupied piece of land is against the 4th Geneva Convention –it is considered a war crime.”

“My second biggest worry is what happens once the curfew lifted – we fear with 900,000 soldiers there, there will be massacre. I am trying to tell the world community to act.

“Another fear is that, whatever is happening in Kashmir, India will blame Pakistan.

“I am alarmed and I think the world leaders need to know. I’ve spoken to world leaders – Trump, Boris Johnson – and by telephone spoke to Merkel, Macron, Muslim leaders. This is the time for the world to act before this goes too far.

“And second, this has the potential of the unthinkable: two nuclear armed countries face to face. Surely the Security Council came into being to stop this. This is as bad as it gets.

“I would not have come out of Pakistan, just coming out of really difficult economic situation…I am alarmed. A sane mind can’t think of a nuclear war, no sane mind can think of it. We grew up after the Cuban crisis, all of us knew what cold war was  because other war unimaginable,. But what you have in India now – this is ideology, racist ideology which believes in supremacy of Hindu race. How do you reason with them, with what they’ve done in Kashmir – would you expect a civilized society to do what they have done. I worry as this goes on – that’s why the UN must act.”

“This is the first time since the Cuban crisis that two nuclear armed countries will come face to face. What we fear are already the statements – ‘terrorists lined up on border of Kashmir waiting to go in’. What benefit would Pakistan have to send terrorists when 900,000 security forces – only more oppression on people of Kashmir – what would be achieved except that Pakistan would be blamed and more oppression of people of Kashmir.

Khan will make Kashmir the focus of his General Assembly address on Friday.

“If 8 million Europeans, or Jews, or Americans – forget Americans – were put under siege for 50 days ,would reaction have been same? They make statements but there is no pressure on Modi to lift the siege so we will keep mounting the pressure. I will tell the UN that if a massacre, I mean what are 900,000 troops doing there? 900,000 troops are not to fight terrorists, they are to control, intimidate, subjugate a population – the entire Muslim population – this is why this will have repercussions far beyond Kashmir – 1.3 billion Muslims are watching.

“Where is the world community, where are laws? The UN Security Council gave them right of self-determination – this will have repercussions, will create radicalization. It will get worse. I’m flagging it now, because this is just the beginning. Once the curfew lifted, God knows what will happen- Kashmir lost 100,000 people in 30 years. Do they think because India revoked Article 370, that Kashmiris will just accept? There is every likelihood of a massacre and the world community will be responsible.”

“The UN has a responsibility – it is a UN Security Council resolution that gave Kashmiris their right of self-determination – but what happening now- responsibility lies on them, too. – big countries, powerful countries, I urge them to look beyond big markets. If this thing goes wrong, the effects will go way beyond b orders of subcontinent – this obsession with big markets and trade, this is serious, and I again repeat, we don’t know what will happen after curfew lifted. I fear that with 900,000 troops, will be massacre.”

Very possibly, too, Prime Minister Khan sees an opportunity, after years in which the Kashmiris may have become complacent about choosing between India and Pakistan. As he said, many Kashmiri leaders were pro-India, but after this, he would expect Kashmiris to vote to ally with Pakistan.

“I know why the response is lukewarm and why Modi is not (pressured)- People look at it as market of 1.2 billion people – sadly, this is what is happening. Material comes over the human – because it’s a big market.

“ My simple message to all those looking at a big market, is this can go very wrong… once conflict starts between two nuclear armed countries – it would go beyond us, madness. Things will only deteriorate. What will happen when lift the curfew? What do they think the Kashmiris, after they have treated them, will they quietly accept India taking over Kashmir? I fear there will be blood bath, and that’s when things deteriorate very rapidly.”

During the press briefing, Khan also said that he was asked to play a role to deescalate the situation between the US and Iran, and that US President Donald Trump called on him to help broker the deal with the Taliban and the United States that was to have enabled the American troops to leave Afghanistan, before learning by tweet that the meeting at which the deal would have been signed was canceled. He said he still had hopes that the deal could be resurrected, and once a deal was set between the US and the Taliban, then the Taliban and Afghan government could make their own deal.

Before the Iranian attacks on Saudi Arabia’s oil facility, “Trump asked if we could deescalate the situation and maybe come up with another deal [to replace the Nuclear deal]. I did convey this, and trying out best, can’t reveal more than that.

“Yes, I am mediating between the United States and Iran,” Khan acknowledged. “I spoke to [Iran President] Rouhani yesterday, after the meeting with Trump – but can’t say more, except we are trying to mediate.

About Afghanistan, he said, “I spoke to Trump –I am trying to get the talks restarted between Taliban and Americans.

As for the threat to the global supply of oil if the situation with Iran and the Mideast escalates, he said, “It would be a tragedy not just for Pakistan but all developing countries, with their budgets affected if war takes place and oil prices shoot up .It will cause much more poverty.”

Kashmir for 30 years, freedom of movement has grown – today, act of shutting people in homes for 50 years has alienated entire spectrum of Kashmiri public – there were times when Kashmiris were pro-india, today no one would be ever get a vote pro-India in Kashmir. What the India government has done is to tell Kashmiris they are not equal human beings. They are not thinking through what happens after siege is lifted.

“The only reason people of Kashmir are being subjected to this is because they are Muslims. If Muslim countries don’t take a stand –because of trade – that’s what leads to radicalization, when governments don’t act on wishes of people and people see injustice.”

He said that in his meeting with Trump, “I apprised him of the gravity of the situation – intelligent human beings think ahead – have to hope for best but prepare for worst – worst scenario is unthinkable – normal human beings don’t think of that….

“You could do anything as long as you brand people ‘Islamic terrorists.’ That’s what Modi is doing –and  hoping to get away with it. That’s why we are telling civilized world, Send your observers, if India has nothing to worry about. Their excuse for putting people under curfew, shutting them in houses, their excuse is to ‘develop’ Kashmir, for ‘prosperity of Kashmir’ – this is the Modi position. It is important for us to tell the world so at least everyone knows. I have apprised all the world leaders.

“What Modi has done is box himself into a blind alley. There is nowhere to go except massacre of people of Kashmir when the curfew is lifted, there is no other way to go. The people of Kashmir for 30 years have been fighting for independence – 100,000 lost their lives, lost their fear of death. When 8 million lose fear of dying and freedom becomes much more important than living a life of slavery, I don’t think he will be able to stop it. I think momentum will gain pace and I know where will eventually lead: freedom for people of Kashmir.

“But for some reason countries put economic interest ahead of human beings – it is the same with climate change – because they don’t want to lose growth rate, they don’t accept the impending change that climate change brings to the  world.”

Money, he said, is at the root of the evil, and the corruption. “Money laundering, from the developing world into rich countries through corruption, the ruling elites of developing world taking money out. This is plunder of poor countries. Poor countries are getting poorer, rich getting richer and criminals who plunder have an easy way of parking money, buying flats in London. Richer countries should have stronger money laundering laws. If we can identify that money is stolen, it should be given back. The problem is that the existing laws are so complicated. If the rich countries want, they can easily tighten laws to deter criminals in third world to take money out.”