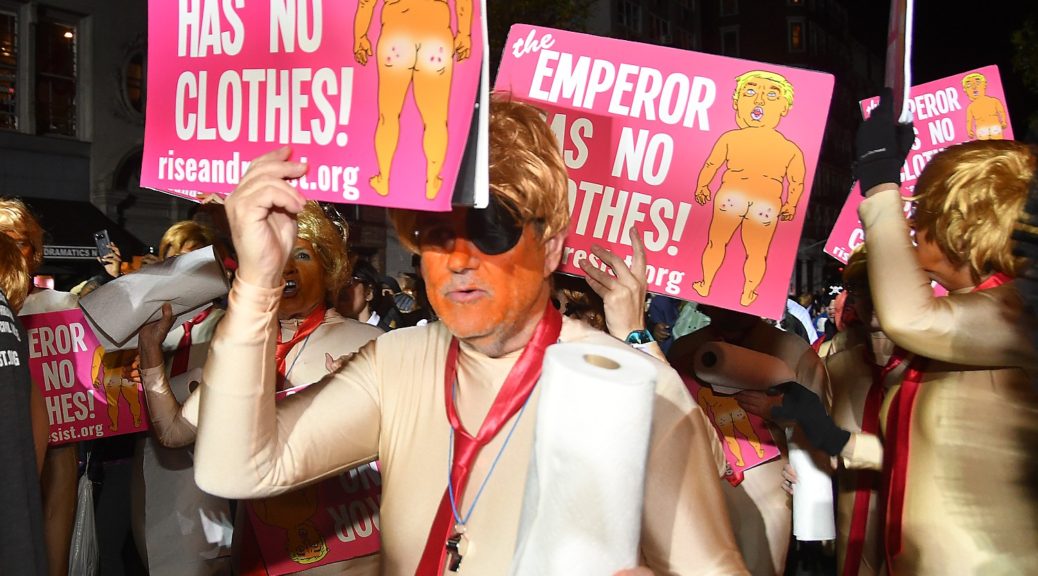 The Village Halloween Parade is not nearly as political and outrageous as it used to be – the goal is to be an expression of creativity and if anything, good will and spirituality. But still, there were a few standouts. Notably, a whole group of Gays Against Guns, and a group calling itself “Rise & Resist” wearing costumes and carrying signs with the message, “The Emperor Has No Clothes!” Indeed, the entire parade wound up being a form of resistance against the terror attack that occurred just hours before and less than a mile away – as one parade regular put it, “a giant F-U to the terrorists.”

Just a few hours and less than a mile away from where a 29-year old used a rented pickup truck to mow down cyclists and pedestrians on the West Side Highway bikepath, killing eight and injuring 12, thousands were gathering in costumes for the 44th annual Village Halloween Parade. With high confidence that the terror attack was by a lone wolf and not coordinated, the decision was made for the parade to go on, albeit with enhanced security. Even with the counter-terrorism officers draped in military-style assault weapons, vests and helmets, and with the heightened sense of security, the police were accommodating and the mood of marchers and viewers alike more playful than seditious.

Governor Andrew Cuomo, New York City Mayor Bill DiBlasio and NY Police Commissioner James P. O’Neill marched with the parade – which brings out one million people who line the mile-long route along Sixth Avenue and tens of thousands of marchers, giving a shout out for New Yorkers to defy terrorism by going on with their lives.

While the terrorist committed mayhem, Governor Cuomo said, “He did not stop New Yorkers from being New Yorkers.”

Speaking to Anderson Cooper on CNN, Cuomo said, “This was an attack that was designed to create terror, and it — it killed and frightened people. It was despicable. But, New Yorkers are resilient, New Yorkers go on. We learned the hard way on 9/11 that we are a target, we are the international symbol of democracy and freedom and we understand that. And since 9/11 we’ve lived with this and we’ve put together the best security force on the globe in my opinion, and we worked together and the response was great. But this afternoon was terrible.

“Tonight we’re at a Halloween parade to say you didn’t win and you didn’t affect us and we’re out and celebrating and we’re doing what New Yorkers do and we’re living our lives because we’re not going to allow the terrorists to win, period. And that’s why I’m here marching in the parade, not because I have a great costume.”

“They are trying to divide. The point is to unite, to show normalcy. To politicize this event [as Trump did immediately] is wholly unproductive,” Governor Cuomo said later in a press conference.

Trump, predictably and unlike the reaction to the Las Vegas massacre which killed 58 and injured hundreds, ridiculously blamed Senator Schumer, and called for a travel ban and even more extreme vetting, in contrast to the call “this is not the time to politicize a tragedy” in response to the most lethal massacre in modern history. (Interestingly, he did not bother to call Governor Cuomo or Mayor DiBlasio as every president would have done after such a heinous event, spending his time tweeting out attacks on Democrat Sen Schumer for a diversity visa program adopted 20 years ago and signed by George HW Bush when Schumer was in the House; Schumer and the “Gang of 8” in their grand attempt to devise comprehensive immigration reform, proposed changes but Republicans blocked consideration of the immigration bill.)

Down Sixth Avenue, you could see the Freedom Tower that rose from the shattered Twin Towers, lighted red, white and blue.

“One World Trade Center was 9/11,” Cuomo told Anderson Cooper. “It was the darkest day that we went through in New York, but what we did is we got right back up and didn’t let them win. and we built back bigger, better and stronger than ever before, that’s who we are. If you think you’re going to beat us, you’re wrong. If you think these terrorist attacks are going to put a dent in the New York spirit, you’re wrong. And New York, America is about freedom and it is about democracy and will always be. And whatever attack you think you can bring is going to fail because our spirit is stronger than theirs.”

Indeed, none of Trump’s bigoted, racist anti-Muslim, anti-immigrant policies would have prevented this tragedy: not The Wall (this guy came into the US in 2010 through JFK), the travel ban against predominantly Muslim countries (Uzbekistan, though accounting for a large proportion of ISIS fighters, is not one of the countries excluded); or ending sanctuary cities (he was not undocumented or “illegal” but had a green card). While the pro-gun lobby is fast to blame any massacre on mental health rather than political or terror motive (like Dylann Roof or the guy who shot up a Planned Parenthood office), a “suicide by cop” or other derangement is never taken into account if the perpetrator is a Muslim or non-native.

But what is Trump’s solution to terror?  He is threatening to cut off funds to New York City for anti-terrorism and policing, the #1 terror target in the US, because of New York City’s stance on making undocumented immigrants feel secure if the New York City does not abandon its sanctuary city policy. Indeed, this guy, who had nothing more than a traffic ticket during his time in the US, was radicalized in this country, and very likely Trump’s policies had something to do with why he was receptive to ISIS propaganda. Obama had a much more effective program to stem and stop this sort of homegrown, self-radicalized, lone-wolf terrorism – working in immigrant communities, forging relationships, making people feel secure and a part of American society with a stake in it, so they report suspicious behavior and do not fall under the spell of radicalism.

But in the end, it is impossible to completely stop such acts of terror. It is mind-blowing the speed with which authorities are looking to harden communities against such attacks — making bikelanes more secure – and yet, completely ignore the pervasive terror of gun violence that takes 33,000 lives and maims thousands more each year.

Those positions were on view during the Village Halloween Parade, which is an opportunity for people to express themselves in creative, even humorous, ways.