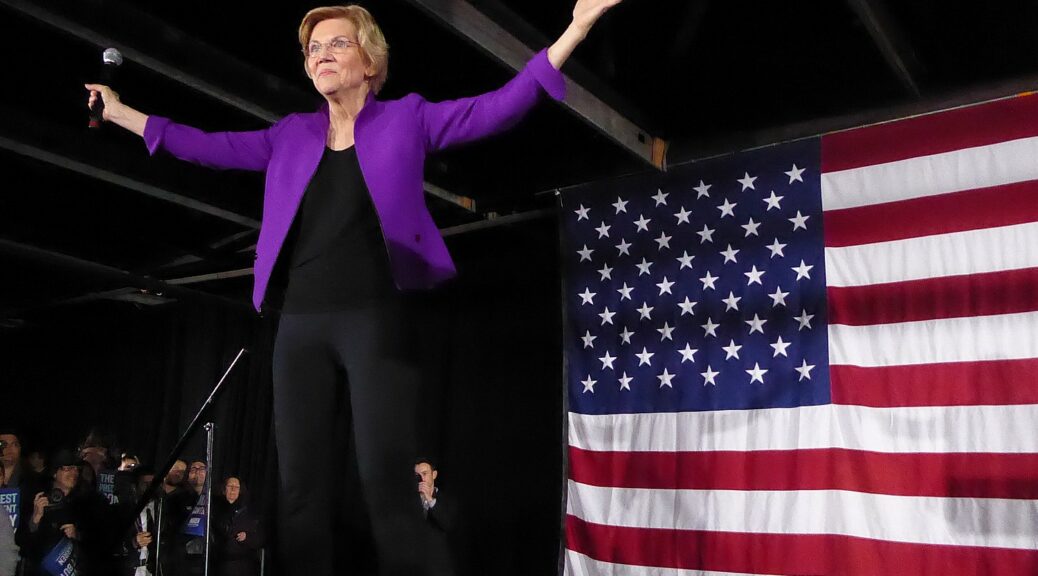 The venue for Senator Elizabeth Warren’s rally was strategic for her message: a former warehouse with dank walls now used for an entertainment space in Long Island City, the neighborhood that booted Amazon, despite its promise to bring 25,000 jobs, in exchange for a $3 billion tax incentive.

The message the declared 2020 Democratic candidate for president brought to the 600 eager supporters was that it is time to break up the high-tech companies that have come to wield out-sized economic power more like government, dictating demands and reclaim government for the people.

“We have these giant corporations — do I have to tell that to people in Long Island City? — that think they can roll over everyone,” she said, comparing Amazon to “The Hunger Game.”

“Giant corporations shouldn’t be able to buy out competition. Competition has to be able to thrive and grow.”

“Who does government work for? Just the richest people and corporations? I want government that works for the people.”

“I spent whole life wondering what happening to middle class, why so much rockier, steeper, and even rockier and steeper for people of color – what has gone wrong in America.

“It’s corruption plain and simple and we need to call it out.

Her prescription: change the rules of government, of the economy, of politics:

Where to start? Change the rules of government by taking corruption head on.

“I introduced the biggest anti-corruption bill since Watergate; it’s big, long, complex, but here are a few pieces:

“End lobbying as we know it. Stop the revolving door between Wall Street and Washington; make Supreme Court follow the basic rules of ethics. Anyone who wants to run for federal office, must release their taxes.

Warren is advocating an ultra millionaire’s tax: imposing 2% tax for those with over $50 million in assets.  That means the top 0.1% -75,000 households. She estimates that would generate $2.4 trillion.

In what sounds like an expansion of Obama’s oft-taken-out-of-context line, “You didn’t build that,” Warren justifies the wealth tax saying, “I’m tired of free loading billionaires. You built (or inherited) your fortune, good for you, but you built it using workers we educated, roads and bridges we paid to build, police – all helped. So yeah, you built a great fortune, so give a little back to the American people (who enabled you).

It’s a property tax, she said, not unlike the property tax that any homeowner, farmer, condo owner all pay, but includes the Picassos, diamonds and yachts.

What would it do? It would fund universal child care, and still have billions left over.

To change the rules of politics and protect our democracy, she said, “I want to see a constitutional amendment to protect the right to vote and make sure every vote gets counted. Overturn Citizens United.” (adding that she isn’t taking any corporate PAC money, but is depending on grassroots donations, ElizabethWarren.com.)

“I don’t go to closed door meetings with millionaires. I’m here with you.”

“My father was a janitor but his daughter got a chance to be a teacher, a college professor, a Senator and a candidate for President of the United States. I believe in opportunity because I’ve lived it. I want an American where every child gets a chance to build a future.

She then took questions (the questioners were picked at random):

Asked her view of Governor Andrew Cuomo trying to woo Amazon back after local progressives including State Senator Michael Gianaris, who introduced her at the rally,  she said, “This is like ‘Hunger Games’ – it is not just the enormous economic power, but  the political power they wield.

“A handful of companies spend $50 million lobbying Washington – a great return on investment if they get to keep Washington from enforcing regulations, antitrust laws, hold back oversight. That’s not how America is supposed to work. Corporate power… and billionaire power, all those who make their voices heard through money. They fund the think tanks that come to, predetermined conclusions, the public relations firms, the soft ads on TV, controlling government, they tilt the playing field over and over against everyone else.”

She reflected that she went to see Trump being sworn in, and realized that with control of the White House and both houses of Congress, the Republicans could have swept away health care and Medicare “by Tuesday.” “But the next day, there was the biggest protest in the history of the world.”

“I want to rein in big tech. That won’t happen by talking inside the Beltway, but in rooms like this.”

Asked whether her wealth tax would cause billionaires like Trump to simply move outside the US, she quipped, “That would be a bad thing?” but explained the 2% wealth tax would be on all property where it is held, so a yacht in the Caribbean would be taxed.  More tax treaties mean it can be tracked. The IRS (now underfunded and understaffed) would step up enforcement. Even with a 15% cheat factor, you still get nearly $3 trillion in revenue. As for moving and renouncing US citizenship to avoid the tax? There would be a 40% exit penalty.

“You built your fortune here, you owe something to the American people.”

Asked about addressing homelessness and the lack of affordable housing, Warren said, “It’s a matter of values. In the richest country in the history of the world, people shouldn’t be sleeping in the street. I have a plan, a housing plan, but the first step is to diagnose the problem: Why has the cost of housing gone up? Wages, adjusted for inflation for four decades are flat, but housing costs have risen by two-thirds. That puts a squeeze on families.”

She said that over the years, government has withdrawn investment in housing, while private developers have build the more profitable mcmansions and luxury high rises. “There’s been an increase in housing at the top but no increase for middle class and down. The federal government is not making investment in housing for poor, working poor and middle class. Meanwhile, across America, the housing stock has deteriorated, shrinking in size, but the population is expanding, so people are paying more and more for less and less.

“The answer: build more housing. I want to build 3.2 million new housing units all across the country. That would decrease rents by 10%. I want more housing for purchase, so families can build equity over time.

“Housing is how working families have built wealth generation after generation – paying off the mortgage, and living on Social Security, grandma can live with the family, the home passes on wealth to the next generation.

“But then the big banks came along – looked to black, brown home owners’ equity. They targeted black and brown people for the nastiest mortgages – Wells Fargo, Bank of America. Greed.

“Today, the gap between white and black home ownership is 30 points. Race matters in America.

“My housing bill has something we haven’t seen anywhere else: in formerly red-lined areas, first time home buyers or those who lost their homes during the housing crash, will get assistance to buy again.”

Asked whether she would support ending the filibuster which the Republican minority used to block progressive legislation during the Obama administration, to block his judicial appointments, even the Merrick Garland Supreme Court nomination, she said (not too coyly): “It’s all on the table, baby. I’m on record for filibuster reform. The Republicans used filibuster to block judicial nominees, the director of the Consumer Financial Protection Board, the National Labor Relations Board. “Republicans get to do what they want when they’re in power, and when we are, we drink a lot of tea. It’s all on the table.”

“I get that things I’m asking for all are hard – attacking corruption, changing the rules of the economy, democracy. I get that some people earn more or less, but everyone should have an equal  share of democracy.”

People, she said, saved the Consumer Financial Protection Board, which she created after the 2008 financial collapse. “The people saved it, and it’s already forced the biggest banks to return $12 billion to the people they cheated.

“I’m calling for big structural change, but you don’t get what you don’t fight for,” she said, citing the abolitionists, suffragettes, union organizers, the foot soldiers of civil rights, gay rights activists. “They were all told, ‘it’s too hard, give up now, and yet, every one of them stayed, fought, organized, persisted [she said to big cheers], and changed. This is our moment to change.

In an already crowded field of candidates – even the progressive faction – Warren is the only one who has clearly spelled out policy proposals and the underlying rationale, the powerful statistics of growing inequality, that she has studied and worked to change for years to level the playing field, “make government work for you”: campaign finance reform and government reform; housing; tax reform.

And in this venue, it was fascinating to see how she could be so factual, so academic, but so enthusiastic  and personable, her audience asked for more detail about how she would address the critical shortfall  in affordable housing, even taking her by surprise.

The evening was organized a little like a townhall, with Warren moving freely about a stage in front of a giant American flag, taking questions, and then at the end, offering to stay as long as necessary so anyone who wanted to take a photo with her could get their chance.

One thought on “Warren Brings 2020 Campaign to Long Island City to Call for Breaking Up Big Tech, Corporate Giants”