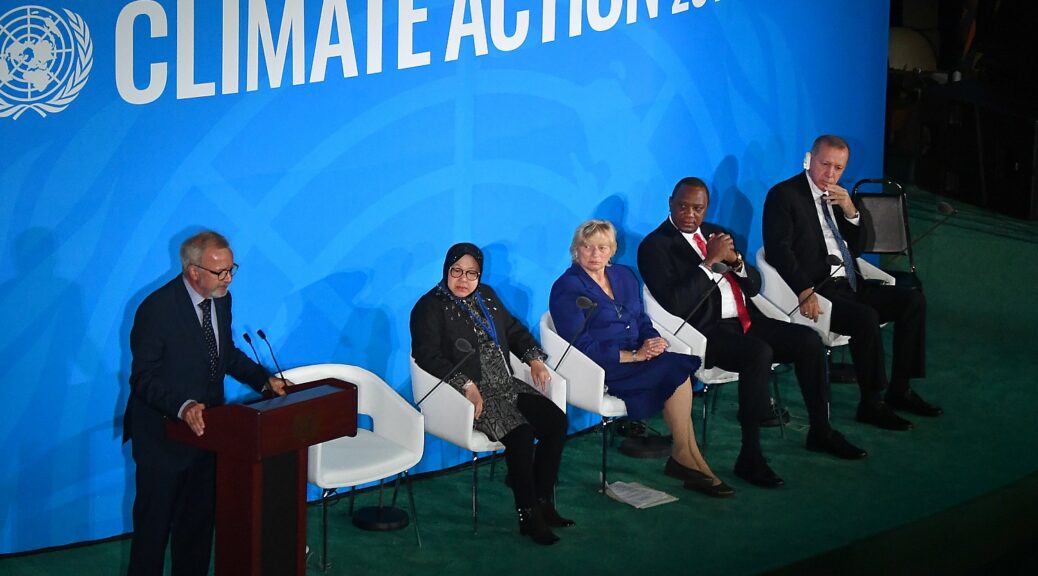 Clearly the world’s leaders are finally listening to the rising tide of civic actions, including an outpouring of youth activists, not asking but demanding action on climate change – preventing the planet from heating more than 1.5 degrees Celsius, mitigating and adapting to the impacts of global warming, from rising sea levels, more frequent and violent superstorms, wildfires, droughts, floods and famines, extinction of wildlife and plants due to lost habitats, and the health impacts due to the spread of epidemics, disease and illness.

Major announcements by government and private sector leaders during the course of the day-long  United Nations Climate Action Summit, September 23, boosted climate action momentum, and demonstrated growing recognition that the pace of climate action must be rapidly accelerated.

77 countries committed to cut greenhouse gas emissions to net zero by 2050, while 70 countries announced they will either boost their national action plans by 2020 or have started the process of doing so.

Over 100 business leaders delivered concrete actions to align with the Paris Agreement targets, and speed up the transition from the grey to green economy, including asset-owners holding over $2 trillion in assets and leading companies with combined value also over $2 trillion.

Many countries and over 100 cities – including many of the world’s largest – announced significant and concrete new steps to combat the climate crisis.

Many smaller countries, including Small Island Developing States and Least Developed Countries, were among those who made the biggest pledges, despite the fact they have contributed the least to the problem.

UN Secretary-General António Guterres, closing the Summit, said “You have delivered a boost in momentum, cooperation and ambition. But we have a long way to go. We need more concrete plans, more ambition from more countries and more businesses. We need all financial institutions, public and private, to choose, once and for all, the green economy.”

Youth leaders including Greta Thunberg, who in an impassioned address that followed a worldwide Climate Strike, said, “We will be watching,” drove home the urgency of greater action by leaders, and their determination to hold leaders to account.

Among the major announcements:

• France announced that it would not enter into any trade agreement with countries that have policies counter to the Paris Agreement.

• Germany committed to carbon neutrality by 2050

• Russia, one of the few holdouts and one of the world’s largest carbon emitters, with an economy largely based on fossil fuel extraction and export, adopted the Paris Climate Agreement.

• 12 countries made financial commitments to the Green Climate Fund, the official financial mechanism to assist developing countries in adaptation and mitigation practices to counter climate change. This is in addition to recent announcements from Norway, Germany, France and the United Kingdom who have recently doubled their present contributions.

• The United Kingdom made a major additional contribution, doubling its overall international climate finance to L11.6 billion for the period from 2020 to 2025.

• India pledged to increase renewable energy capacity to 175gw by 2022 and committed to further increasing to 450GW, and announced that 80 countries have joined the International Solar Alliance.

• China said it would cut emissions by over 12 billion tons annually, and would pursue a path of high quality growth and low carbon development.

• The European Union announced at least 25% of the next EU budget will be devoted to climate-related activities.

• The Russian Federation announced that they will ratify the Paris Agreement, bringing the total number of countries that have joined the Agreement to 187.

• Pakistan said it would plant more than 10 billion trees over the next five years. On unprecedented levels of private sector action:

• A group of the world’s largest asset-owners — responsible for directing more than $2 trillion in investments — committed to move to carbon-neutral investment portfolios by 2050.

• 87 major companies with a combined market capitalization of over US$ 2.3 trillion pledged to reduce emissions and align their businesses with what scientists say is needed to limit the worst impacts of climate change—a 1.5°C future.

• 130 banks – one-third of the global banking sector – signed up to align their businesses with the Paris agreement goals On transitioning from brown to green energy:

• Michael Bloomberg will increase the funding and geographic spread of his coal phase out efforts to 30 countries. Already, his work has helped to close 297 out of 530 coal plants in the US.

• Countries, including France and New Zealand, announced that they will not allow oil or gas exploration on their lands or off-shore waters.

• Heads of State from Finland, Germany, Greece, Hungary, Ireland, Italy, Netherlands, Portugal, and Slovakia, are among those that announced that they will work to phase out coal. The Republic of Korea announced it would shut down four coal-fired power plants, and six more will be closed by 2022, as well as the doubling of its contribution to the Green Climate Fund.

• The Summit also delivered critical platforms for improving energy efficiency and reducing the growing energy needs for cooling, with the “Three Percent Club” coalition working to drive a three percent annual global increase in energy efficiency and the Cool Coalition setting ambitious national cooling targets for its members with the potential to deliver up to 1 degree on the pathway to a 2050 net zero carbon world. On scaling up financing and unlocking barriers to funds:

• Many countries announced new contributions to the Green Climate Fund, the official financial mechanism to assist developing countries in adaptation and mitigation practices to counter climate change, with several countries, including France, Germany, Norway and the United Kingdom, announcing that they would double their present contributions.

• Further, the Climate Investment Platform, officially announced during the Summit, will seek to directly mobilize US$ 1 trillion in clean energy investment by 2025 in 20 Least Developed Countries in its first year.

• The African Development Bank said it was doubling its climate-related financing to $25 billion by 2025. Funding will go to projects including a multi-billion initiative to develop 10,000 megawatts of solar power from the Sahara that will provide electricity to 250 million people. “What a difference a green, more prosperous, resilient, peaceful and secure future will mean,” said Dr. Akinwumi Adesina, President, African Development Bank.

• Coalition for Climate Resilient Investment – just announced and the first of its kind – “will transform mainstream infrastructure investment and drive a  permanent shift toward climate resilient economy for all countries, but especially for low and mid income countries which bear the brunt” by providing data analytical tools to price in the cost of climate resiliency into investments, said John Haley, CEO, Willis Towers Watson, one of the world’s largest insurance companies.

• The state of Maine committed to carbon neutrality by 2045.

• Summit initiatives were designed to ensure the actions undertaken would be fair for all, supporting jobs and clear air for better health, and protect the most vulnerable, as well as new initiatives on adaptation, agriculture and early warning systems that will protect 500 million additional people against the impacts of climate change.

New initiatives announced  have been designed to be scaled up to deliver impact at the global scale needed. The Secretary-General urged governments, businesses and people everywhere to join the initiatives announced at the Summit, and promised to “keep pushing” for greater ambition and action.

The Secretary-General committed the UN system to support implementation of plans presented at the Summit, with an initial report to be delivered at COP25 in Santiago, Chile.

A full list of the announcements and commitments made at the Climate Summit can be found at www.un.org/climatechange

Youth Climate Activist Greta Thunberg to UN Climate Summit: ‘If You Choose to Fail Us, I Say We Will Never Forgive You’