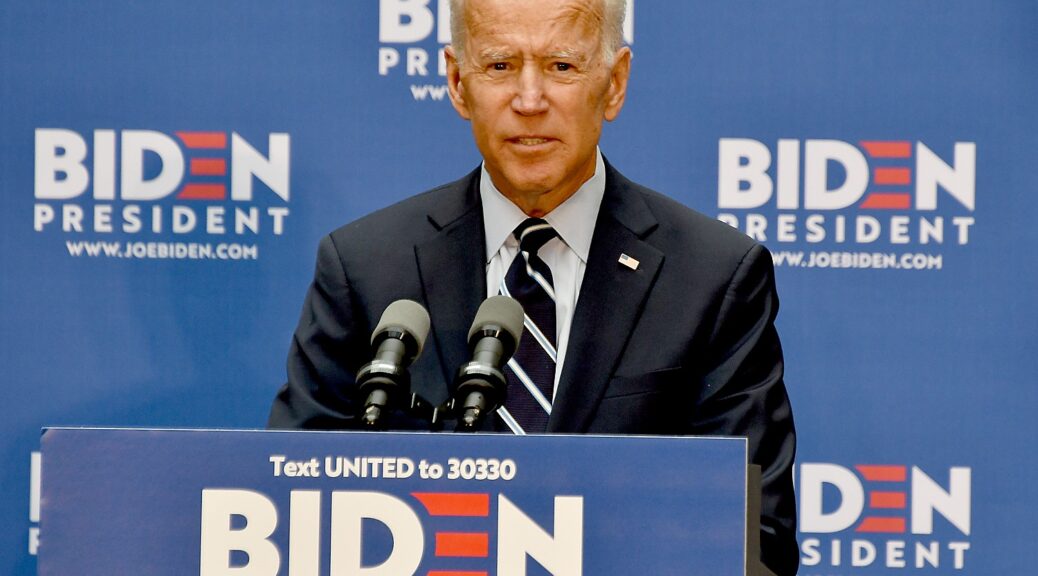 On International Women’s Day, Vice President Joe Biden, running for president, released a fact sheet detailing his record of working to advance gender equality at home and around the world, both as a Senator, notably championing the Violence Against Women Act (which Republicans have refused to renew) and as part of the Obama Administration which, as Obama’s first act, signed the Lilly Ledbetter Fair Pay Act and promoted Obamacare which ended the hardship of being a woman counting as a “pre-existing condition”. This is from the Biden campaign:

Joe Biden has a long track record of working to advance gender equality at home and around the world. As a Senator, Biden introduced the International Violence Against Women Act (IVAWA), which provided a framework for the United States to address gender-based violence globally. Though IVAWA never became law, the Obama-Biden administration used executive action to implement much of the bill and its comprehensive approach to gender-based violence.

The Obama-Biden Administration promoted the health, safety, and empowerment of women and girls around the world because it was both the right thing to do and the smart thing to do. Women’s full participation in all spheres of society is fundamental to achieving global peace, development, and prosperity.  Twenty-five years ago this principle was agreed to by 189 countries in the Beijing Declaration, which set forth a platform for action to advance women’s rights globally. Unfortunately, today, as a result of the disastrous policies of the Trump Administration, women’s rights and their opportunities for full economic and political participation are under assault.

Trump’s decision to reinstate and expand the global gag rule has had devastating effects on the health and well-being of women around the world, with fewer organizations providing critical healthcare; and his implementation of this rule here in the United States has cut funds to over 900 women’s health clinics that primarily serve women of color. Trump Administration policies have sought to cut funds for global efforts to improve child and maternal health and to halt the spread of HIV/AIDS. His Administration’s cruel immigration policies have rejected asylum claims for women fleeing horrific gender-based violence and made it much more difficult for foreign women and girls who were trafficked into the United States to obtain visas and receive the medical and social services they need to recover. He has watered down and threatened to veto UN Security Council resolutions that address sexual violence in conflict, making it far more difficult for the international community to hold the perpetrators of such violence accountable and ensure survivors have access to the health and support services they need.

Confronting Gender-Based Violence Globally. The scourge of violence against women affects global communities: An estimated 1 in 3 women are subject to physical violence, rape, or stalking by a partner at some point in their lives, with closer to 70% of women affected in some countries. Gender-based violence has profound economic costs for societies. It is a barrier to girls’ education, and inhibits women’s full participation in politics and the economy, holding back entire communities and countries.

As president, Joe Biden will expand his Violence Against Women Act of 1994 to the global landscape and restore U.S. leadership internationally by championing the fundamental human right that all women should live free from violence—a future the Violence Against Women Act helped make possible in the United States. President Biden will rescind the Mexico City Policy that President Trump reinstated and restore U.S. funding to the United Nations Population Fund, which advances child and maternal health, and works to end female genital mutilation and cutting, early and forced marriage, and other practices detrimental to the well-being of women and girls. The Biden Administration will launch multi-sectoral efforts to confront gender-based violence globally, beginning in Central America, where women face some of the highest rates of femicide (the murder of women because of their gender) in the world. Biden will spearhead a comprehensive effort that places diplomatic pressure on governments to train law enforcement to root out the corruption that enables gender-based violence and teaches authorities to effectively investigate and prosecute these crimes. Moreover, he will ensure that women and girls fleeing gender-based violence are given the opportunity they deserve to seek asylum in the United States.

Elevating Women Economically. The Biden Administration will invest in women as economic catalysts for growth and development around the world, because we know that when we grow incomes and opportunity for women, entire communities, economies, and countries benefit.We forgo trillions of dollars in wealth globally because women aren’t fully empowered and employed, and that has negative consequences for the well-being of families and entire communities, because women invest a particularly large share of their income in the education and health of their families.  Alarmingly, women’s global economic participation and opportunity actually declined in the last year. Given the trends, it will take 257 years to achieve gender parity. Leaving one-half of the world’s population behind inhibits peace, prosperity, and security at home and abroad, and we must tackle the multifaceted barriers hindering the economic advancement of women and girls. We cannot help half the world’s population advance meaningfully without also addressing gender-limiting laws, policies, and norms, and we can’t do it alone, without working with other countries.

Joe Biden will invest in critical areas to advance the status of women, and close gaps between the economic well-being of men and women, and boys and girls around the world. Specifically, the Biden Administration will increase access to education as a driver of empowerment and accumulation of wealth. Additionally, President Biden will focus on enhancing financially inclusive banking and increasing women’s access to capital, so that women have the resources they need to start and expand businesses. And President Biden will work with partners in countries and multilateral organizations to systematically tackle and eliminate legal and attitudinal barriers to equity and inclusion. . More broadly, Biden Administration efforts to advance development globally will pay particular attention to the often unique challenges faced by underrepresented communities around the world, including indigenous women, Afro-Latina women, and women in the LGBTQ community. The goal will be equality.

Promoting Women’s Contributions to Peace and Security. For 20 years, the international community has recognized the critical contributions women make to advancing peace and security, whether it’s recognizing the first signs of violent conflict in their communities, or helping to forge more durable peace agreements in the wake of conflicts. Yet women continue to be excluded from conflict resolution and peacebuilding.

President Biden will ensure that efforts to build a more peaceful and secure world include the talents of everyone, including women. In countries affected by war, terrorism, and insecurity, a Biden Administration will protect and advance women’s inclusion in decision-making roles, from negotiators to parliamentarians, from security actors to peaceful protestors. He will ensure full implementation of the United States’ 2017 law — based on the groundbreaking Obama-Biden Administration National Action Plan on Women, Peace, and Security — recognizing the security benefits of women’s participation. As president, Biden will revive the United States’ commitment to refugees and displaced persons, raising our refugee target to admit 125,000 annually to start, and he will require that programs supporting refugees recognize and address the specific challenges women and girls face, from targeted violence and trafficking to unequal access to basic services. He will champion multilateral efforts to end sexual violence in conflict in the UN Security Council and to hold perpetrators of such violence accountable, starting with ISIS. The Biden Administration will provide financial assistance and training for local and international efforts to document cases of ISIS-perpetrated sexual violence, urge the Iraqi government to prosecute ISIS prisoners for gender-based violence crimes, and support peacebuilding efforts in Iraq and elsewhere that promote women’s inclusion.To ensure all civilians are better protected in times of crisis, President Biden will work with the United Nations to improve peacekeeper performance and accountability, including by supporting the UN’s efforts to ensure peacekeepers are trained to prevent conflict-related sexual violence and are held accountable if they perpetrate sexual exploitation and abuse.

Supporting Women’s Leadership Globally. Women’s political and civic leadership promotes equality and stability. When women are represented in parliaments, their participation is associated with a decreased risk of civil war and fewer human rights abuses. Around the world, women are more likely to advocate for policies on issues like education and health, which promote the well-being of everyone. Yet, only 4 out of 193 countries have at least 50 percent women in the national legislature. A Biden Administration will amplify and elevate the voices of authentic, local women leaders globally, creating an initiative to strengthen the influence of women-led civil society organizations in advancing women’s and girls’ well-being; combating gender-based violence; and promoting peace, security, and prosperity. Furthermore, recognizing the benefits to equality and stability when women are represented in political office, the Biden administration will break down barriers to women’s political empowerment, supporting civic education and leadership development for women and girls around the world.

Pursue Ratification for the U.N. Convention on the Elimination of all forms of Discrimination Against Women (CEDAW). For nearly 40 years, CEDAW has been the most important international vehicle for advancing gender equality. It is simply embarrassing that the United States has not ratified the convention. We are in the company of some of the most oppressive countries in the world, including Iran, Sudan, and Somalia. From the very beginning, the Obama-Biden Administration made ratifying this U.N. convention a priority. As president, Biden will continue to push the Senate to ratify this important treaty, so that we can better advance the rights of women and girls here at home and around the world.