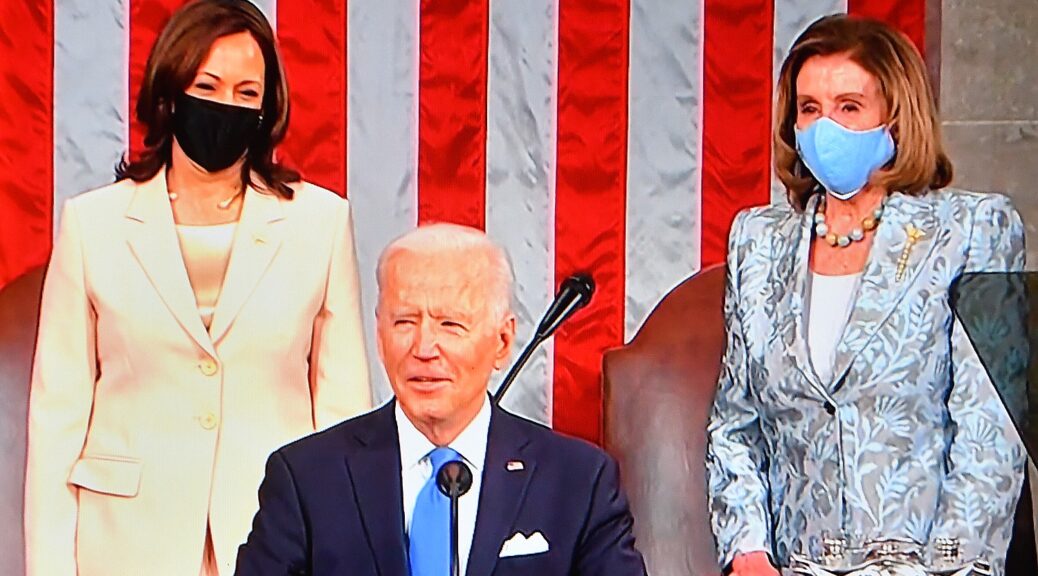 There was so much about President Joe Biden’s first speech to a joint session of Congress (otherwise known as the State of the Union address) that was extraordinary, with the twin challenges of the coronavirus pandemic and domestic insurrection still hovering, but also the historic nature: Biden began by acknowledging the historic moment of “Madam Speaker” and “Madam Vice President” sitting on the podium behind him.

But there was a lot more to his review of his first 100 days in office that was historic: “Because of you, the American people, our progress these past 100 days against one of the worst pandemics in history has been one of the greatest logistical achievements this country has ever seen,” he declared. The economy created 1,300,000 new jobs in Biden’s first 100 days – more jobs in the first 100 days of any President, and the economy is on track to achieve 6% growth, the fastest growth rate in four decades.

“I come to talk about crisis and opportunity, about rebuilding the nation, revitalizing our democracy, and winning the future for America.”

His speech was long on specific proposals and praise for others, and very short on self-congratulations, even stepping on applause lines and speaking over and over about coming “together”. “Thanks to all the help of all of you, we’re marshalling — with your help, everyone’s help — we’re marshalling every federal resource.”

He laid out his plan – and rationale – for the biggest, most transformational investment in infrastructure in history, the American Jobs Plan: “These are the investments we made together as one country, and investments that only the government was in a position to make.  Time and again, they propel us into the future.”

He proposed a new agency like DARPA, responsible for inventing the internet, for medicine, to ultimately eradicate cancer and deal with the epidemic of Alzheimer‘s. He is proposing expanding access to the Affordable Care Act, lowering premiums, and lowering the costof prescription drugs for everyone by allowing Medicare to negotiate prices.

His other big, trillion-dollar proposal is for the American Families Plan: in care – child care, parental and spousal care – paid family leave, and four more years of public education: two for pre-K and two more for community college.

He spoke of union rights and the need to raise the minimum wage to $15, pay equity.

These big, bold, transformational programs, he said, will be paid for by reforming tax code and collections. “Trickle-down economics has never worked and it’s time to grow the economy from the bottom and the middle out… What I’m proposing will help create millions of jobs and generate historic economic growth.  These are among the highest-value investments we can make as a nation.”

He addressed immigration reform, justice reform, voting rights, gun reform, and for good measure, told the LGBTQ and specifically transgender young people, “I’ve got your back.” He called for Congress to pass the George Floyd Police Reform Act in time for the one-year anniversary of his death at the hands of a police officer. “We have to come together to rebuild trust between law enforcement and the people they serve, to root out systemic racism in our criminal justice system, and to enact police reform in George Floyd’s name that passed the House already…

“We have a giant opportunity to bend to the arc of the moral universe towards justice — real justice. And with the plans outlined tonight, we have a real chance to root out systemic racism that plagues America and American lives in other ways; a chance to deliver real equity — good jobs, good schools, affordable housing, clean air, clean water, being able to generate wealth and pass it down two generations because you have an access to purchase a house.  Real opportunities in the lives of more Americans — Black, white, Latino, Asian Americans, Native Americans.”

For the most part delivered in quiet, intimidate, personal tones, frequently speaking directly to the American people, and only in a few instances raising his voice rose in volume and intensity, especially in terms of the need for America to stand as a beacon of democracy, and ward off the looming vultures of autocracy licking their chops over a collapse.

Issues like fighting the pandemic, terrorism and the climate crisis cannot be done by any one nation alone.

“America will not back away from our commitments — our commitment to human rights and fundamental freedoms and to our alliances…. America is an idea — the most unique idea in history: We are created, all of us, equal.  It’s who we are, and we cannot walk away from that principle and, in fact, say we’re dealing with the American idea.”

And while saying firmly he will stand up to China, Russia, North Korea, and Iran, and pursue terrorists everywhere, even as the US ends its forever war in Afghanistan, he declared emphatically, “We won’t ignore what our intelligence agencies have determined to be the most lethal terrorist threat to the homeland today: White supremacy is terrorism.  We’re not going to ignore that either.”

He did not shirk from raising intractable issues that have plagued America for decades, starting with gun reform saying, “I will do everything in my power to protect the American people from this epidemic of gun violence, but it’s time for Congress to act as well.

“Look, I don’t want to become confrontational but we need more Senate Republicans to join the overwhelming majority of Democrat colleagues and close the loopholes requiring a background check on purchases of guns.  We need a ban on assault weapons and high-capacity magazines.  And don’t tell me it can’t be done.  We did it before, and it worked.

“This shouldn’t be a red or blue issue.  And no amendment to the Constitution is absolute.  You can’t yell “Fire!” in a crowded theater.  From the very beginning, there were certain guns, weapons,that could not be owned by Americans.  Certain people could not own those weapons ever.

“We’re not changing the Constitution; we’re being reasonable.  I think this is not a Democrat or Republican issue; I think it’s an American issue.”

So is immigration. “Immigration has always been essential to America.  Let’s end our exhausting war over immigration.  For more than 30 years, politicians have talked about immigration reform, and we’ve done nothing about it.  It’s time to fix it.”

On his first day in office, Biden sent a comprehensive immigration reform bill to Congress. “If you believe we need to secure the border, pass it, because it has a lot of money for high-tech border security.  If you believe in a pathway to citizenship, pass it so over 11 million undocumented folks — the vast majority are here overstaying visas.  Pass it.  We can actually — if you actually want to solve a problem, I’ve sent a bill to take a close look at it.”

At least, he said, pass protection for DREAMers.

“Can our democracy overcome the lies, anger, hate, and fears that have pulled us apart?

“America’s adversaries –- the autocrats of the world –- are betting we can’t.  And I promise you, they’re betting we can’t.  They believe we’re too full of anger and division and rage. They look at the images of the mob that assaulted the Capitol as proof that the sun is setting on American democracy.  But they are wrong.  You know it; I know it.  But we have to prove them wrong.

“Our Constitution opens with the words — as trite as it sounds – ‘We the People’.  Well, it’s time to remember that ‘We the People’ are the government — you and I.  Not some force in a distant capital.  Not some powerful force that we have no control over.  It’s us.  It’s ‘We the People.’

“In another era when our democracy was tested, Franklin Roosevelt reminded us, ‘In America, we do our part.’  We all do our part.  That’s all I’m asking: that we do our part, all of us.

“If we do that, we will meet the center challenge of the age by proving that democracy is durable and strong.  Autocrats will not win the future.  We will.  America will.  And the future belongs to America.”