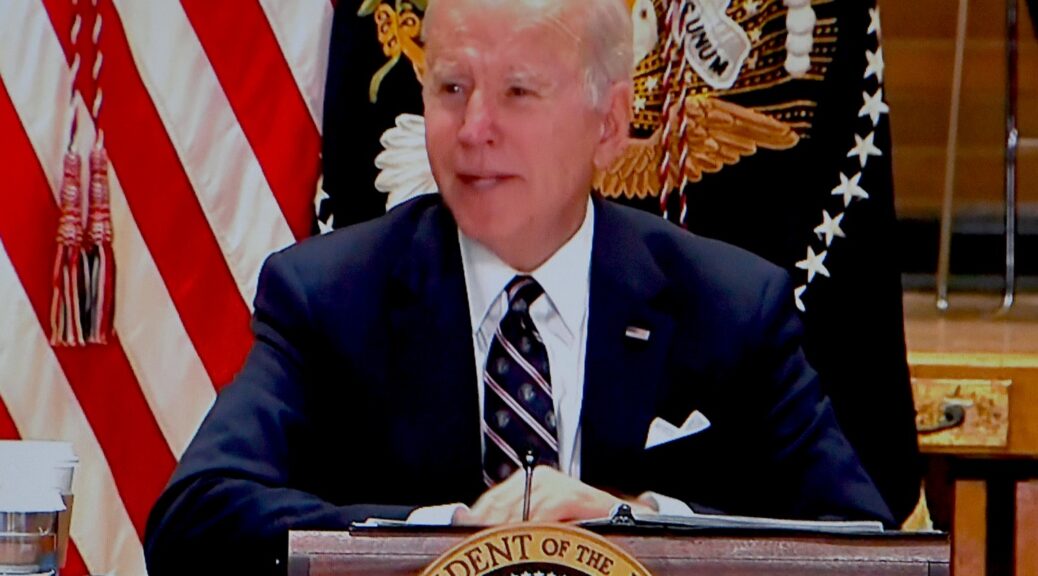 People everywhere are complaining about the rise in violent crime, but have basically blocked the most effective way to reduce the epidemic of tragedy: sensible gun control. It is mind-blowing to hear the gun rights fanatics claim that there should be no limits whatsoever – that anyone anywhere should be able to carry a gun without a permit, without registration, without training or licensing. Yet they also claim to support police and “law and order” – when it is the “guns everywhere” that makes law enforcement so difficult, that makes police more likely than not to shoot an unarmed suspect because of an assumption they are armed. The gun rights fanatics claim there should be no restrictions whatsoever, yet voting rights are also part of the Constitution, and they have no qualms whatsoever about putting in major restrictions, onerous registration requirements, making polls and ballots hard to access. So now they are challenging New York State’s gun permit law and San Jose, California’s requirement that gun owners carry liability insurance, much as is required to own an automobile.

But as President Joe Biden noted, in coming to New York City to commiserate over the murder of two  police officers to announce new measures to combat gun violence, no “freedom” is absolute – not speech, press, assembly, religion. He challenges the law that insulates gun manufacturers from liability – the only industry in the country that has such protection – yet if manufacturers could be sued, they would respond immediately with smart gun technology, gun locks and gun storage. And importantly, he is marshaling the Department of Justice to be more aggressive in prosecuting gun trafficking and illegal guns, especially going after repeat offenders. He called upon states and localities to use COVID-19 relief funds to fund violence prevention initiatives, notably declaring that instead of “defunding police” he wants to put funds into crime prevention .

In the past, we have listed many of the commonsense gun control measures that should be implemented:

Here is a White House fact sheet of the additional actions that the Biden Administration is taking to reduce gun crime:

Today, the Biden Administration is announcing additional actions to reduce gun crime and make communities safer. This plan builds on the steps the President has taken since the beginning of his Administration to stop the flow of guns being used in crimes, bolster federal, state, and local law enforcement, invest in community-based programs that prevent, interrupt, and reduce violence, expand opportunity, lower recidivism, and increase funding for community policing.

The President is committed to serving as a strong partner for communities on the frontlines of the fight against crime. That’s why his American Rescue Plan gives cities and states historic levels of funding that they can use to put more cops on the beat, and invest in community-based violence prevention and intervention programs.

President Biden also recognizes the important role that federal law enforcement plays in supporting their local partners – especially in stopping the interstate flow of guns used in crimes, like the gun that was used in the tragic recent fatal shooting of two NYPD officers. The Department of Justice has launched five gun trafficking strike forces, including one in New York City, and it has implemented a nationwide strategy to combat violent crime, which has focused over the past year in taking violent criminals and thousands of crime guns off the streets.

Stronger law enforcement is critical in stopping gun crime, but it’s made more effective when we make real investments in making our communities stronger and in addressing the causes of crime before it spills over into violence. That’s why President Biden’s comprehensive approach makes sure cities and states have the funding, training, and know-how they need to invest in proven tactics including community policing, street outreach by credible messengers, hospital-based intervention, and youth programming. And it’s bolstered by additional funding to create economic opportunity with job training, expand after-school activities, and provide stable housing and other stabilizing supports necessary to reduce recidivism and help formerly incarcerated individuals reenter their communities. That’s also why the President continues to urge Congress to act on his $300 million budget request to more than double the size of the Department of Justice’s COPS community policing grant program.

Taken together, this strategy steps up and focuses law enforcement efforts on violent offenders, stems the trafficking of illegal guns, and makes real investments in communities to intervene in and prevent gun violence. The President knows a complex and devastating challenge like the surge of gun crime we’ve seen over the last two years requires an ambitious, evidence-based response that uses every tool at our disposal, and that’s exactly what his plan does.

Last June, President Biden announced a five-part, comprehensive strategy to tackle the persistent spike in gun crime cities across the country have experienced since the start of the pandemic. The President’s strategy:

Today, the U.S. Department of Justice announced a set of important new actions to stem the flow of firearms used to commit violence and support local law enforcement partners in efforts to combat gun crime. The Justice Department will:

Today, the President is reaffirming his call for Congress to reach a bipartisan agreement on FY22 appropriations that include half a billion dollars in new funding for proven strategies we know will reduce gun crime: a $300 million increase to expand accountable community policing through the COPS Hiring Program and $200 million for evidence-based community violence interventions. Facing a spike in gun crime that has persisted since the start of the pandemic, cities across the country cannot wait any longer for Congress to provide the resources the President requested as part of his FY22 Budget to save lives.

Building on Progress: One Year of Action to Reduce Gun Violence

1. Stemming the flow of firearms used to commit violence. In June 2021, the Justice Department announced a new policy to underscore zero tolerance for certain willful violations of the law by federally licensed firearms dealers that put public safety at risk. In July, the Justice Department launched five new law enforcement strike forces focused on addressing significant firearms trafficking corridors that have diverted guns to New York, Chicago, Los Angeles, the Bay Area, and Washington, D.C. Those strike forces have already opened more than 540 investigations and taken custody of almost 3,100 crime guns. Last year, the Justice Department’s Bureau of Alcohol, Tobacco, Firearms and Explosives (ATF) issued a proposed rule to help curb the proliferation of “ghost guns,” which are unserialized, privately made firearms that are increasingly being recovered at crime scenes and have been identified by law enforcement officials as a serious threat to public safety.  ATF is analyzing public comments in response to the proposed rule, the next step in the regulatory process.

2. Supporting local law enforcement with federal tools and resources to address violent crime. The Biden Administration made historic levels of funding from the American Rescue Plan – $350 billion in state and local funding – available for law enforcement purposes such as hiring more officers, investing in retention strategies, and paying overtime to advancing community policing strategies in communities experiencing an increase in gun violence associated with the pandemic. Funds were also made available for prosecuting gun traffickers, rogue dealers, and other parties contributing to the supply of crime guns, as well as collaborative federal/state/local efforts to identify and address gun trafficking channels. Cities across the country, such as Milwaukee, Wisconsin; Albuquerque, New Mexico; Syracuse, New York; and Mobile, Alabama, have responded to this call by committing and deploying ARP funds to community-oriented policing and other law enforcement strategies. In addition, as part of the Justice Department’s Comprehensive Strategy for Reducing Violent Crime, the Justice Department has supported law enforcement in local communities in addressing gun violence. In particular, the Justice Department has provided enforcement support from the ATF, Federal Bureau of Investigations (FBI), Drug Enforcement Agency (DEA), and United States Marshals Service (USMS).

3. Investing in evidence-based community violence interventions. As part of his Build Back Better agenda, President Biden proposed $5 billion in funding for the Department of Justice and Centers for Disease Control and Prevention (CDC) to invest in community violence interventions – evidence-based programs that are shown to help reduce violent crime. While working to secure this funding, the Biden Administration is using existing resources to expand community violence interventions. For example, the Biden Administration made certain American Rescue Plan (ARP) funding – $350 billion in state and local funding, and $122 billion in K-12 funding – available as unprecedented resources for CVI. Senior White House advisors also issued a memo to state and local officials outlining how these elected leaders not only can – but should – use ARP funds for CVI. Cities across the country, such as Seattle, Washington; Buffalo, New York; and Atlanta, Georgia – have responded to this call by committing and deploying ARP funds for CVI. In addition, five federal agencies made changes to 26 different programs to direct vital support to community violence intervention programs as quickly as possible. In July, senior White House staff established The White House Community Violence Intervention Collaborative, a 16-jurisdiction cohort of mayors, law enforcement, CVI experts, and philanthropic leaders committed to using American Rescue Plan funding or other public funding to increase investment in their community violence intervention infrastructure. The Collaborative is spending 18 months strengthening and scaling the jurisdictions’ community violence intervention infrastructure to reduce gun crime and promote public safety. National experts and federal agencies are providing training and technical assistance to help communities assess their existing public safety ecosystem, identify gaps, and build the capacity to expand programming that saves lives.

4. Expanding summer programming, employment opportunities, and other services and supports for teenagers and young adults. The Biden Administration has made historic levels of funding from the American Rescue Plan  – $350 billion in state and local funding and $122 billion in school funding  – available for purposes such as hiring nurses, counselors, and social workers; providing court personnel and operations costs to return to pre-pandemic operation levels; providing and expanding employment services, including summer jobs for young people and programs that provide training and work experience for formerly incarcerated persons and other individuals who live in communities most impacted by high levels of violence; providing and expanding summer education and enrichment programs, including summer camp; and scaling up wraparound services, such as housing, medical and mental health care, trauma-informed care, substance use disorder treatment, food assistance, and job placement services, for victims of crime, young people, formerly incarcerated persons, and individuals and households facing economic insecurity due to the pandemic. Cities and counties across the country, including St. Louis, Missouri; Tucson, Arizona; and Los Angeles County, California, have responded to this call by committing and deploying ARP funds for these purposes.

5. Helping formerly incarcerated individuals successfully reenter their communities. On June 21 the Department of Labor awarded $85.5 million to help formerly incarcerated adults and young people in 28 communities transition out of the criminal justice system and connect with quality jobs. This included $60 million for Pathway Home projects serving adults, including beginning while participants are still incarcerated and continuing post-release, as well as $25.5 million in Young Adult Reentry Partnership grants to organizations serving young adults 18-24 who were previously involved with the justice system or who left high school before graduation. The President’s FY22 budget proposal calls for an increase in these grants, to $150 million, for reentry employment opportunities. The Treasury and Labor Departments has provided training and technical assistance to employers to help leverage multiple federal resources, including the Work Opportunity Tax Credit (WOTC) and the federal bonding program to encourage employment of formerly incarcerated persons. In FY21, the Department of Justice’s Office of Justice Programs (OJP) provided more than $110 million in grant awards to support adults and youth returning to their communities after confinement. The President’s FY22 budget proposal calls for a $25 million increase for Second Chance Act programs, to further invest in diversion and substance abuse treatment programs, enhance reentry and rehabilitation efforts, and connect people with mental health services.