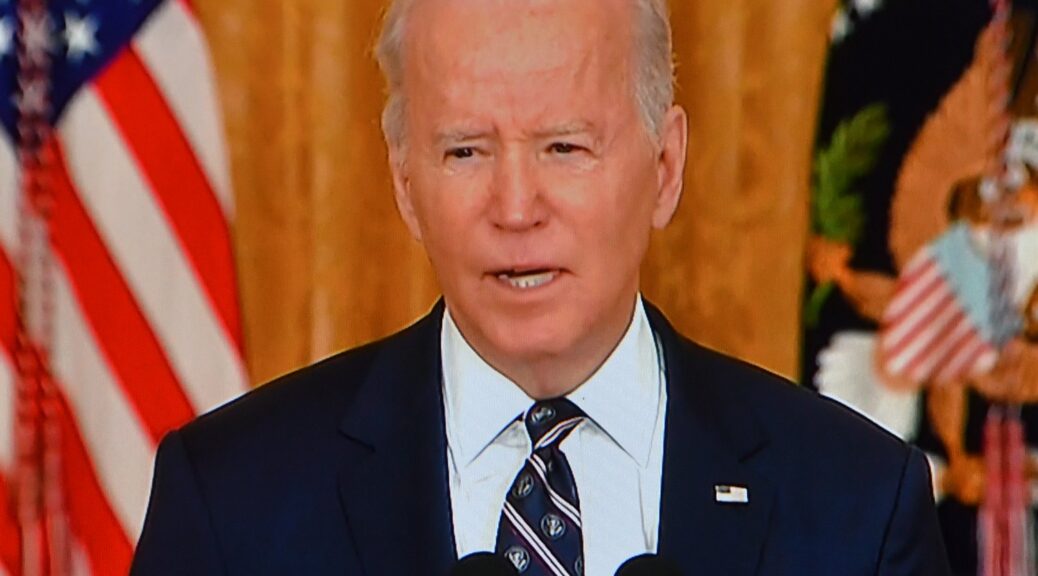 Today, in response to Vladimir Putin increasing hostilities against Ukraine, deploying Russian forces into Ukraine and giving a speech in which the Russian President dismissed Ukraine’s right to exist as a free and sovereign nation, President Joe Biden issued a tranche of new sanctions.

“Who in the Lord’s name does Putin think gives him the right to declare new so-called countries on territory that belonged to his neighbors?  This is a flagrant violation of international law, and it demands a firm response from the international community…. He directly attacked Ukraine’s right to exist.  He indirectly threatened territory formerly held by Russia, including nations that today are thriving democracies and members of NATO.  He explicitly threatened war unless his extreme demands were met. And there is no question that Russia is the aggressor.  So we’re clear-eyed about the challenges we’re facing.“

Here is a transcript of his remarks:

Yesterday, Vladimir Putin recognized two regions of Ukraine as independent states and he bizarrely asserted that these regions are no longer part of Ukraine and their sovereign territory.  To put it simply, Russia just announced that it is carving out a big chunk of Ukraine.

Last night, Putin authorized Russian forces to deploy into the region — these regions.  Today, he asserted that these regions are — actually extend deeper than the two areas he recognized, claiming large areas currently under the jurisdiction of the Ukraine government.

This is the beginning of a Russian invasion of Ukraine, as he indicated and asked permission to be able to do from his Duma.

I’m going to begin to impose sanctions in response, far beyond the steps we and our Allies and partners implemented in 2014.  And if Russia goes further with this invasion, we stand prepared to go further as — with sanction.

Who in the Lord’s name does Putin think gives him the right to declare new so-called countries on territory that belonged to his neighbors?  This is a flagrant violation of international law, and it demands a firm response from the international community.

Over the last few months, we have coordinated closely with our NATO Allies and partners in Europe and around the world to prepare that response.  We’ve said all along and I’ve told Putin to his face more than a month ago that we would act together and the moment Russia moved against Ukraine.

Russia has now undeniably moved against Ukraine by declaring these independent states.

So, today, I’m announcing the first tranche of sanctions to impose costs on Russia in response to their actions yesterday.  These have been closely coordinated with our Allies and partners, and we’ll continue to escalate sanctions if Russia escalates.

We’re implementing comprehensive sanctions on Russian sovereign debt.  That means we’ve cut off Russia’s government from Western financing.  It can no longer raise money from the West and cannot trade in its new debt on our markets or European markets either.

Starting tomorrow [today] and continuing in the days ahead, we will also impose sanctions on Russia’s elites and their family members.  They share in the corrupt gains of the Kremlin policies and should share in the pain as well.

And because of Russia’s actions, we’ve worked with Germany to ensure Nord Stream 2 will not — as I promised — will not move forward.

As Russia contemplates its next move, we have our next move prepared as well.  Russia will pay an even steeper price if it continues its aggression, including additional sanctions.

The United States will continue to provide defensive assistance to Ukraine in the meantime.  And we’ll continue to reinforce and reassure our NATO Allies.

Today, in response to Russia’s admission that it will not withdraw its forces from Belarus, I have authorized additional movements of U.S. forces and equipment already stationed in Europe to strengthen our Baltic Allies — Estonia, Latvia, and Lithuania.

Let me be clear: These are totally defensive moves on our part.  We have no intention of fighting Russia.  We want to send an unmistakable message, though, that the United States, together with our Allies, will defend every inch of NATO territory and abide by the commitments we made to NATO.

We still believe that Russia is poised to go much further in launching a massive military attack against Ukraine.  I hope I’m wrong about that — hope we’re wrong about that.  But Russia has only escalated its threat against the rest of Ukrainian territory, including major cities and including the capital city of Kyiv.

There are still well over 150,000 Russian troops surrounding Ukraine.  And as I said, Russian forces remain positioned in Belarus to attack Ukraine from the north, including war planes and offensive missile systems.

Russia has moved troops closer to Ukraine’s border with Russia.  Russia’s naval vessels are maneuvering in the Black Sea to Ukraine’s south, including amphibious assault ships, missile cruisers, and submarines.

Russia has moved supplies of blood and medical equipment into position on their border.  You don’t need blood unless you plan on starting a war.

And over the last few days, we’ve seen much of the playbook that Secretary Blinken laid out last week at the United Nations Security Council come to pass: a major increase in military provocations and false-flag events along the line of contact in the Donbas; dramatically staged, conveniently on-camera meeting of Putin’s Security Council to grandstand for the Russian public; and now political provocation of recognizing sovereign Ukrainian territory as so-called independent republics in clear violation, again, of international law.

President Putin has sought authorization from the Russian parliament to use military force outside of Russian territory.  And this set the stage for further pretexts and further provocations by Russia to try to justify further military action.

Further Russian assault into Ukraine remains a severe threat in the days ahead.  And if Russia proceeds, it is Russia, and Russia alone, that bears the responsibility.

As we respond, my administration is using every tool at our disposal to protect American businesses and consumers from rising prices at the pump.  As I said last week, defending freedom will have costs for us as well, here at home.  We need to be honest about that.

But as we do this, I’m going to take robust action and make sure the pain of our sanctions is targeted at the Russian economy, not ours.

We are closely monitoring energy supplies for any disruption.  We’re executing a plan in coordination with major oil-producing consumers and producers toward a collective investment to secure stability and global energy supplies.

This will be — this will blunt gas prices.  I want to limit the pain the American people are feeling at the gas pump.  This is critical to me.

Yesterday, the world heard clearly the full extent of Vladimir Putin’s twisted rewrite of history, going back more than a century, as he waxed eloquently, noting that — well, I’m not going to go into it, but nothing in Putin’s lengthy remarks indicated any interest in pursuing real dialogue on European security in the year 2022.

He directly attacked Ukraine’s right to exist.  He indirectly threatened territory formerly held by Russia, including nations that today are thriving democracies and members of NATO.  He explicitly threatened war unless his extreme demands were met.

And there is no question that Russia is the aggressor.  So we’re clear-eyed about the challenges we’re facing.

Nonetheless, there is still time to avert the worst-case scenario that will bring untold suffering to millions of people if they move as suggested.

The United States and our Allies and partners remain open to diplomacy if it is serious.  When all is said and done, we’re going to judge Russia by its actions, not its words.

And whatever Russia does next, we’re ready to respond with unity, clarity, and conviction.

We’ll probably have more to say about this as we — if it moves on.  I’m hoping diplomacy is still available.

U.S. joined by Allies and partners to hold Putin accountable; Will impose additional costs if Russia goes further with this invasion

Yesterday, Russian President Vladimir Putin of Russia recognized two regions of Ukraine as independent states and today claimed that recognition to include all of the Donbas region. The Russian Parliament also authorized the deployment of additional Russian forces into this Ukrainian territory.

As President Biden and our Allies and partners have made clear, we will impose significant costs on Russia for Russia’s actions. Today, the Administration is implementing the first tranche of sanctions that go far beyond 2014, in coordination with allies and partners in the European Union, United Kingdom, Canada, Japan, and Australia. And as President Biden promised, we worked with Germany to ensure the Nord Stream 2 pipeline will not move forward.

The President has directed the following measures:

These actions come in addition to steps being taken by our Allies and partners and represent our first response to Russia’s actions. As President Biden made clear, Russia will pay an even steeper price if it continues its aggression