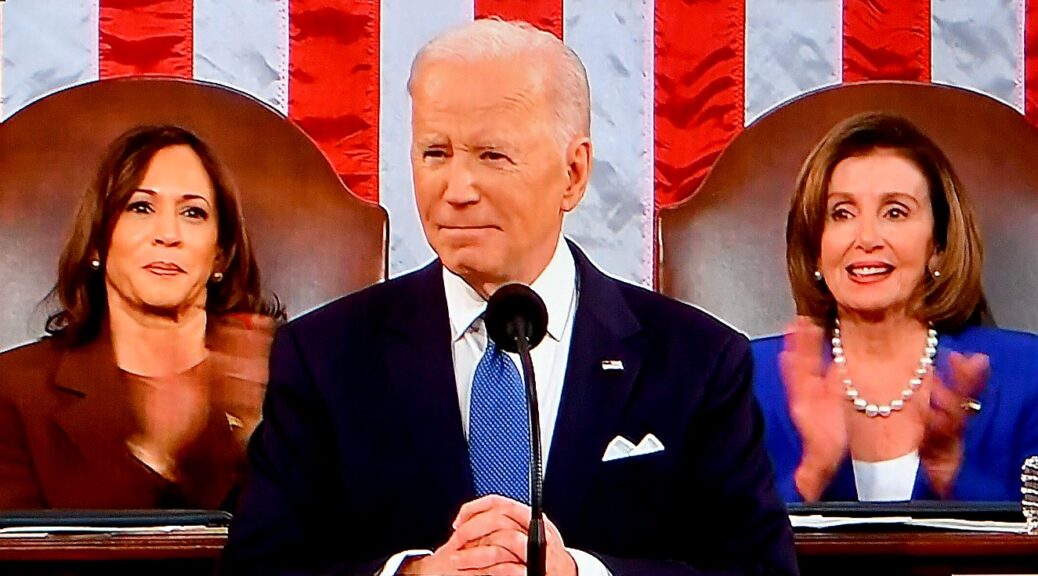 This week, President Biden signed into law the Violence Against Women Act Reauthorization Act of 2022, bipartisan legislation passed by Congress as part of the Omnibus appropriations package. In remarks at the signing, President Biden reflected on having authored the original VAWA, and during Women’s History Month, when Republican-led states are passing cruel and unconstitutional restrictions on women’s reproductive rights and their rights to self-determination, said:

It really wasn’t so long ago this country didn’t want to talk about violence against women, let alone as being a national epidemic, something the government had to address.

When I began, along with others, to pursue this legislation to change this — this issue, we were told that we would literally be responsible for the “disintegration” of American families in the major press.  It wasn’t just the wackos; it was in the mainstream press.

And we talked about creating shelters to give survivors a way out because so many don’t have a way out, and their children — by the way, the vast majority of children on the street with their mothers are there because she’s a victim of domestic violence….

This law broke the dam of congressional resistance and cultural resistance.  And it brought this hidden epidemic out of the shadows.  You know, its introduction — it introduced our nation to so many brave survivors who those stories changed the way America saw the issue.  I mean, in the literal sense, it’s hard to believe — even when I go back and think of when — how it started and where it was.

As a practical matter, things began to shift — the legal and social burdens — away from survivors and onto perpetrators and where they belonged.  It made addressing general — excuse me — gender violence a shared priority with a determined, coordinated response.  It created a hotline, as I said, for millions of women who have used the hotline.  And again, I’ll never forget being told the first time — I said, “What did you do?”  She said, “I got behind the drapes and I held the phone.  And I prayed to God — prayed to God — don’t let him hear this.  Pray God.  Pray God.”

It supported shelters and rape crisis centers, housing and legal assistance, creating lifesaving options for women and children all across the country.  And it helped train police officers, advocates, prosecutors, judges, court personnel to make the entire justice system fair and more responsive to the needs of survivors. ..

Even in 1994, we knew that there was much more we had to do — you know, that it was only the beginning.  That’s why, because of all of you in this room, every time we’ve reauthorized this law, it’s been improved.  It’s not like we didn’t know we wanted to do these other things in the beginning.  It’s we did as much as we could and keep trying to add to it.

Broadening from domestic violence to include stalking and sexual assault in 2000.  That was the change made.

Expanding access to services for immigrants and communities of color in 2005.  That was a change.

Restoring jurisdiction of Tribal courts — (applause) — over non-Native domestic violence offenders who abuse women in Indian Country.  We did that in 2013.

Extending protections to everyone, regardless of sexual orientation and gender identity, in 2013. ..

The law kept growing stronger.  It’s not like we didn’t know in 2005 we should be dealing with the things we dealt with in 2013.  It was getting it done.

Yesterday, I signed the Bipartisan Government Funding Bill…And, consequentially, we forged the next link in the chain…

So we established a new civil rights — a new civil rights cause of action for those whose intimate images were shared on the public screen.  How many times have you heard — I’ll bet everybody knows somebody somewhere along the line that in an intimate relationship, what happened was the guy takes a revealing picture of his naked friend, or whatever, in a compromising position, and then literally, in a sense, blackmails or mortifies that person — sends it out, put it online.

We’re giving survivors real resources against abuse now.  Ex-partners and stalkers who seek to humiliate and hurt them.

We’ve created — you created new programs to help end the backlog of the rape kits.  And those rape kits, by the way, I don’t know — you ought to go to your major cities, those of you in the House and Senate — this group probably has — which I have done.  And this backlog is so significant.  You could solve literally a significant portion of —

Look, the only thing I learned that’s worse than — for a woman — worse than a woman who is abused or raped and says, “It’s Charlie who did it,” and no one believes her — him against her.  And when — you can take a look.  If you take a look at those rape kits and you went through them all, you could identify and arrest probably 40, 50 percent of the rapists in America.  They’re all there.  Their DNAs are there.  It’s all in line.  And run it against the whole panoply.  Very few rapists rape only once.

So, look, that — you know, there’s a lot that goes unprocessed.  And we have to make sure survivors get compensation, and if there have been delays in their cases — you know, we’ve made improvements in the National Criminal Background Check System to help states investigate and prosecute cases when abuses — when abusers who are barred from purchasing firearms attempt to do so.  That, we’ve done federally.  Quite frankly, this held — that’s one of the things that held up this bill for much too long.  Much too long…

And we’ve worked with local public housing authorities to make sure that survivors trapped in a bad situation can find safe new housing options in public housing.  (Applause.)  Because they don’t have (inaudible) to go.  You.

And we also made landmark reforms in military justice to help end the epidemic of sexual violence and harassment in our armed forces — (applause) — fundamentally changing how the military investigates, prosecutes sexual assault, domestic violence, and other related crimes…

Earlier this month, I signed a bar- — bipartisan bill that ends what we know as forced arbitration.  That’s wonderful, isn’t it?  (Applause.)  No, no, but I mean the small print to sign a contract, and the small print says you can’t do anything if your boss, male or female — if you end up getting abused and if you end up doing something — you know, you can’t — you have to do it internally.  No more.  (Applause.)  No more.  Really.

And 80 percent of the people who sign those don’t even know what’s in the — in the contract.

The mechanism has prevented too many survivors of abuse and harassment in the workplace from having the choice to get their day in court.

Look, these are just a few of the steps you’ve all taken and how much you’ve improved this legislation.  But as everyone in this room knows, this work is not going to stop.  It never stops.

Today, one year since a gunman killed eight people in Atlanta, six of whom were women of Asian descent, these horrific murders are a reminder that we still have work to do to put an end to misogyny and racism and all forms of hate we have.

We’re never going to get it all done, but we can’t ever stop trying.  As long as there are women in this country and around the world who live in fear of violence, there’s more we have to do to fulfill this sacred commitment.  No one — no one, regardless of gender or sexual orientation, should experience abuse.  Period.  And if they do, they should have the services and support they need to get through it.  And we’re not going to rest.

But in the meantime, all of you should be enormously proud of what you’ve accomplished.  This reauthorization is testament to the power of your voices and your tireless dedication to changing things for the better.

Fact Sheet:  Reauthorization of the Violence Against Women Act (VAWA)

One of the driving forces of President Biden’s career has been fighting back against abuses of power.  That force led him to write and champion the groundbreaking Violence Against Women Act (VAWA) as a U.S. Senator, landmark legislation that first passed in 1994.  In the nearly three decades since, he has worked with Members of Congress from both parties to pass legislation to renew and strengthen VAWA three times: in 2000, 2005, and 2013.  Each time, he worked to expand access to safety and support for all survivors and increase prevention efforts.  Preventing and responding to gender-based violence wherever it occurs, and in all of its forms, has remained a cornerstone of the President’s career in public service—from VAWA reauthorization to a national campaign to combat campus sexual assault to reforms to address sexual assault and harassment in the military.

While incidents of domestic violence and sexual assault have declined significantly since VAWA first took effect—and efforts to increase access to services, healing, and justice for survivors have improved with each iteration of VAWA—much work remains.

The 2022 reauthorization of VAWA strengthens this landmark law, including by:

Over the past year, the Biden-Harris Administration has taken significant steps to prevent and respond to gender-based violence at home and abroad:

On International Women’s Day in 2021, President Biden signed an Executive Order creating the White House Gender Policy Council and calling for the development of the first-ever government-wide National Action Plan to End Gender-Based Violence, as well as an update to the 2016 United States Strategy to Prevent and Respond to Gender-Based Violence Globally. These strategies will provide a roadmap to guide the Biden-Harris Administration’s whole-of-government effort to end gender-based violence—and in so doing, create a society where survivors are supported and all people can live free from abuse.