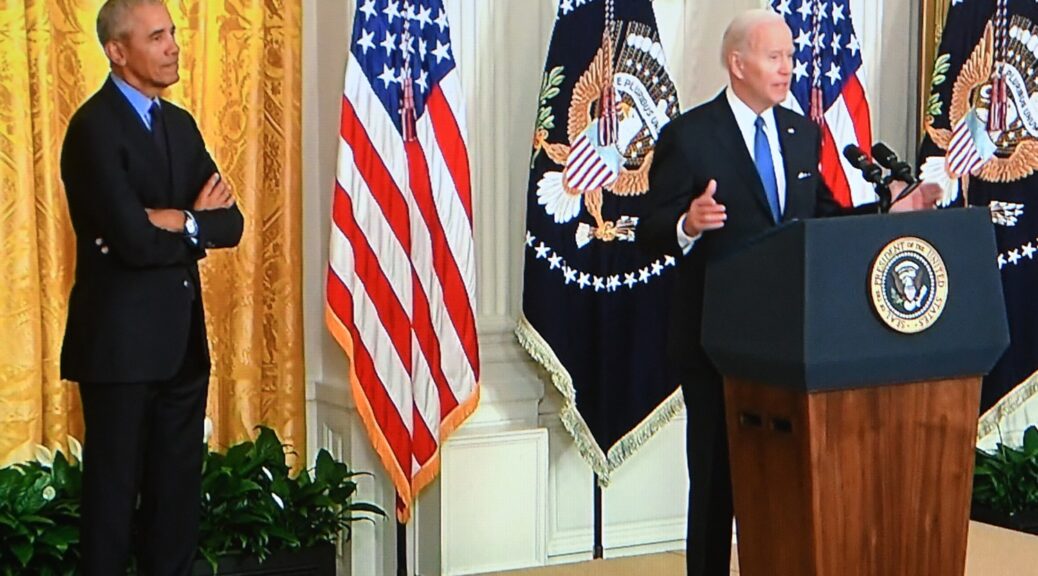 President Joe Biden, with former President Barack Obama at his side, signed an Executive Order to expand access to the Affordable Care Act, which he said was fittingly dubbed “Obamacare”, fix the “family glitch” and lower health care costs for one million Americans. Recalling the difficulty of passing Obamacare, Biden remarked on Obama’s unwavering commitment toward the goal of universal health care, where a medical emergency wouldn’t bankrupt a family and people did not live with the insecurity of being denied coverage. Obama reflecting on the strong opposition from Republicans – who have attempted to repeal the ACA more than 70 times, and only last week, vowed to repeal it when they regain control of Congress – said that compromises had to be made in order to achieve what presidents had failed to do for 100 years in providing access to health care. As Biden said, it was the most consequential legislation since Medicare of 1965. Obama said it was always recognized that the law would need to be improved. That’s what Biden did today.

From day one of his presidency, Biden has worked to expand access to health care, and now, some 30 million have health insurance coverage because of Obamacare, while 100 million Americans with pre-existing conditions are assured of having health insurance (a number that will be vastly expanded with over 75 million having contracted COVID-19 and millions suffering effects of Long-COVID), children can stay on their parents’ plan until age 26, and there are no longer lifetime caps on coverage. Here’s a Fact Sheet from the White House on how Biden-Harris Administration proposes to fix the “family glitch” and lower health care costs – the most significant administrative action to improve implementation of Obamacare since its enactment 12 years ago. “The ACA is stronger now than it has ever been and today we are strengthening it further,” Biden declared.

President Biden and Vice President Harris believe that health care is a right, not a privilege. They promised to protect and build on the Affordable Care Act (ACA), lowering costs and expanding coverage so that every American has the peace of mind that health insurance brings.

The Biden-Harris Administration continues to deliver on that promise. Thanks to the landmark American Rescue Plan, ACA premiums are at an all-time low, while enrollment is at an all-time high. Four out of five Americans can find quality coverage for under $10 a month, and families are saving an average of $2,400 on their annual premiums—$200 in savings every month back to families. The Administration has lowered costs and increased enrollment to a record high of 14.5 million Americans—including nearly 6 million who newly gained coverage. With the addition of Missouri and Oklahoma, two states that expanded Medicaid last year, nearly 19 million low-income Americans are enrolled in the ACA’s Medicaid expansion coverage, adding up to a record nearly 80 million children, pregnant women, seniors, people with disabilities, and other low-income Americans covered by Medicaid.

PROPOSING TO FIX THE “FAMILY GLITCH”

Today, the Biden-Harris Administration is proposing a rule to strengthen the ACA by fixing the “family glitch,” which would save hundreds of thousands of families hundreds of dollars a month.

The Treasury Department and the Internal Revenue Service are proposing to eliminate the “family glitch.” Should today’s proposed rule be finalized, family members of workers who are offered affordable self-only coverage but unaffordable family coverage may qualify for premium tax credits to buy ACA coverage. Should the proposed change be made, it’s estimated that 200,000 uninsured people would gain coverage, and nearly 1 million Americans would see their coverage become more affordable. Many families would be able to save hundreds of dollars a month thanks to lower premiums. This proposed rule would amount to the most significant administrative action to improve implementation of the ACA since its enactment.

Last January, President Biden signed an Executive Order directing federal agencies to take action to strengthen Medicaid and the Affordable Care Act. Today, President Biden is building on that directive with a new Executive Order directing federal agencies to continue doing everything in their power to expand affordable, quality health coverage. This includes:

ADDITIONAL EFFORTS TO STRENGTHEN THE ACA AND MEDICAID

These latest actions build on months of work to strengthen the ACA and Medicaid by lowering costs and expanding coverage.