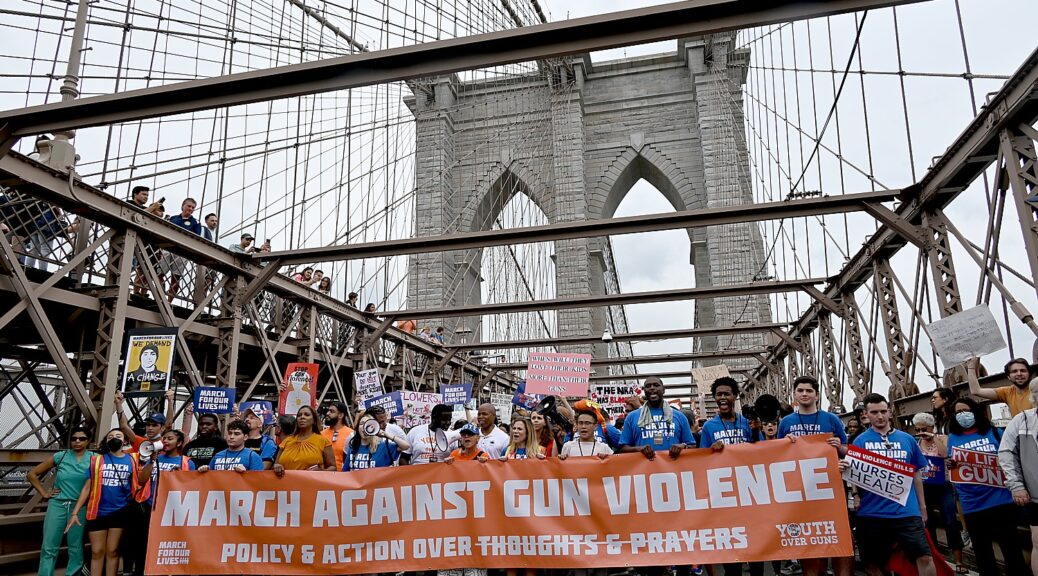 [Breaking news: Just one day after the March for Our Lives events, the bipartisan Senate committee working on some compromise gun violence prevention legislation announced they had come up with a framework. The proposal calls for making juvenile records of gun buyers under age 21 available when they undergo background checks; provides money to states to implement “red flag” laws and to bolster school safety and mental health programs; require more people who sell guns obtain federal dealers’ licenses, which means they would have to conduct background checks of purchasers. President Biden immediately put out a statement that the framework “does not do everything that I think is needed, but it reflects important steps in the right direction, and would be the most significant gun safety legislation to pass Congress in decades.” He urged rapid passage. But as you see in what the gun violence prevention activists are saying, there is much, much more to do.]

Amid the palpable outrage, frustration and fear, there is this kernel of hope that what didn’t happen after Columbine, Sandy Hook, Parkville and now Uvalde, the 40,000 lives lost to gun violence last year, and the more than 200 mass shootings that have already happened this year, or the report that more children and teens are killed by guns than by disease or car accidents, may finally happen: that Congress would finally pass sensible gun safety regulations to end the public health epidemic of gun violence. And the difference is this: the election season for the midterms is already underway and Congressmen have already had their primary challenges so shouldn’t “fear” being primaried by an even more fascist candidate to appeal to the bloodlust of their base.

Over a thousand protesters – representing a huge array of groups including March for Our Lives, Youth Against Violence, teachers from the UFT and AFT, Moms Demand Action, Everytown, NYACLU, New Yorkers Against Gun Violence and many more – who marched from Brooklyn to Manhattan to rally – screamed and cheered when urged to vote out any politician who refuses to put children’s lives over the gun industry’s profits.

They called for universal background checks, banning assault weapons and high-capacity magazines and other instruments and weapons of war never meant for the streets; raise the minimum age to buy a gun to 21; mandate safe storage so that a two-year old who finds a gun doesn’t kill his sibling (or what just happened when a mother handed her two year old her gun, killed his father), and Red Flag laws.

And mindful that it is Republican Senators (Democrats passed gun reform in the House) who have blocked every gun safety measure for the past 30 years, they called for an end to the filibuster, since there do not seem to be 10 Republican Senators of conscience.

Dr. Nancy Dodson, a pediatrician and gun safety activist, said gun violence is a public health crisis and one that is propagated by the propaganda of the gun industry, no different in its campaign to deflect and distract (mental health, not guns), than the lead paint industry who blamed neglectful mothers and even put out a children’s book to say that lead paint is good for you, and the tobacco industry.

“Why aren’t there cigarette ads in magazines, commercials on TVs, toy giveaways?  Because they were sued. But the gun industry, despite 40,000 killed last year including 4000 children has near-total immunity, under the Protection of Legal Commerce in Arms Act. This is an unjust law that must be repealed so that victims and survivors can sue,” she declared, to cheers.

“It would lead to economic justice for victims and radical changes in design, advertising and sales of guns. “What is the life of a child worth? Gun manufacturers should find out in court.”

“Laws can change social norms,” she said. Drunk driving became socially unacceptable, it became a loving gesture to take your friend’s keys away. It should be the same for guns.”

That means more use of Red Flag Laws, so that it becomes culturally acceptable to say, “You’re struggling now, so don’t do something you’ll regret.”

“We have saved lives of children before and cited examples and a public health scourge through changing  culture – drunk driving… And many examples of government taking action – after one guy got on a plane with explosives in his shoe and another with explosive underpants, everyone for the past 20 years has had to take off their shoes at the airport, been patted down and x-rayed.

Ali and Aj of AJ Band described the terror of being in the midst of multiple mass shootings – outside their concert venue, someone sprayed 100 rounds , leaving six dead on the pavement just outside their tour bus where they had hit the ground, then again in Portland, then again in Atlanta they heard shots. “This should not be normal.”

Instead, the Republicans are trying to deflect, putting the onus on mental health and school security, when school districts are cutting funding for actual education, for the arts, theater and music programs that might help that alienated youth to find a better outlet.

“Young people must turn their passion and pain to purpose and vote,” said Attorney General Letitia James, who was with the protest from the beginning of the march through the end of the rally. “Congress won’t act until they feel the power of the people.  Vote in record numbers to end the violence.

“Enough prayers, empty thoughts. This is a defining moment young people, for the country. Women’s rights, civil rights, gay rights, trans rights, disabled rights, environmental protection did not start with politicians. It was all of you young people who lead and politicians who followed. Break the collective yoke around the neck of this country…Turn out and vote, vote, vote the reckless cowards out of office, the spineless, gutless who believe in power over people.”

Janella Hines, representing the UFT which helped organize the march, spoke for the teachers who carried signs saying, “I’m scared.” “Books not bullets.” And how when they decided to make teaching their career, they never expected that protecting children from gunmen with military-style weapons, and comforting the traumatized children after they have lost classmates, was part of the job description.

She focused not on the mass shootings that have so terrorized – in schools, churches, grocery stores, concerts, movie theaters, malls – but violence in homes. One of her student’s, named Chloe, was murdered with her sister and mother by her step father on her sister’s birthday. “The entire school community suffered the loss. The trauma is experienced day after day. This is not what teachers went to school for, but we have to do it. It’s time for policy and change.”

Congresswoman Carolyn Maloney declared, “If guns made us safe, we would be the safest on earth. But the only place more dangerous is Ukraine, and they are at war.

“We are killing people because of the easy access to guns.” She said that gun manufacturers need to be held accountable for profiting from murdering children. and called for an end to the immunity gun manufacturers, unlike every other industry, from liability lawsuits.

Congressman Mondaire Jones, the youngest member of the House Judiciary Committee (whose remarks inspired rebuke from Republicans and Tucker Carlson), noted that the House has passed a package of gun safety bills, but that they will likely languish, as have all gun regulations for the past 30 years, in the Senate. “Make sure the Senate hears you.”

He is a sponsor of the Protecting Our Kids Act which changes federal firearms laws, including to establish new criminal offenses and to expand the types of weapons and devices that are subject to regulation. The bill:

“If we can’t find 10 Senate Republicans of good conscience, we need to abolish the filibuster.”

He also introduced the Judiciary Act, which would expand the Supreme Court by four, to undo the damage of Trump putting three hard-right ideological partisans on the bench, orchestrated by then Majority Leader Mitch McConnell, who refused to allow Obama to appoint a justice after Antonin Scalia died 10 months before the 2016 election, then rushed through Amy Coney Barrett’s appointment even though voting in the 2020 presidential election had already begun.

Meanwhile, the rightwing majority on the Supreme Court is poised to overturn New York’s gun permit law, taking away a vital tool to keep guns off the streets, even as New York State passed 10 more gun safety laws.

Governor Kathy Hochul vowed to bring back the Legislature for an emergency session to address whatever the Supreme Court throws. (My idea is to require all gun owners to be enlisted in a “well-regulated militia” where they would train, drill, and be available to protect the state against foreign and domestic enemies, as the Founding Fathers intended in the Second Amendment (See: Guns Again Again).

New York’s was one of some 450 events throughout the United States and the world, including a re-do of the March For Our Lives rally in Washington DC that followed the 2018 massacre.

They are hoping it isn’t déjà vu all over again, with Congress doing nothing.

The message from Jessalise Rivera: “I’m 9. Please don’t shoot me while I’m learning.”

Here are more photo highlights from the march and rally: