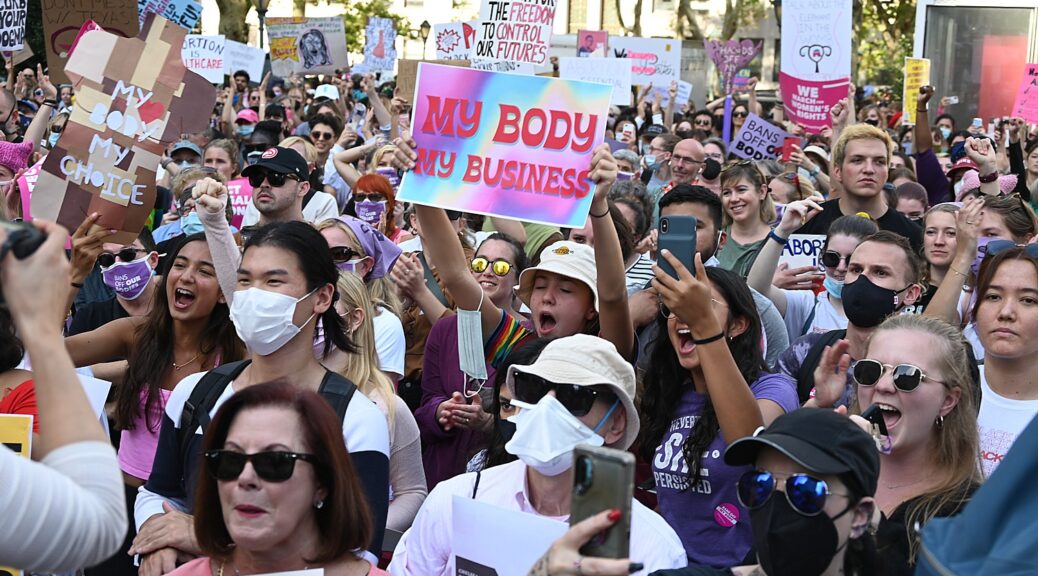 President Joe Biden delivered a speech on July 8 on actions he is taking to protect access to reproductive health care services in light of the Supreme Court overturning the constitutional protections afforded by Roe v. Wade and multiple states immediately implementing bans on abortion rights, in most cases even in the case of rape, incest or the life of the mother. But the President noted that there is only so much he could do by Executive Order or that his administration can do, and exhorted women to take action at the ballot box, elect representatives to local, state and federal office who will protect their personal freedom, liberty and autonomy. Here is a highlighted transcript of his remarks: — Karen Rubin/news-photos-features.com

Now, with the Vice President, Secretary Becerra, and Deputy Attorney General Monaco, I want to talk about an executive order I’m signing to protect reproductive rights of women in the aftermath of the Supreme Court’s terrible, extreme, and, I think, so totally wrongheaded decision to overturn Roe v. Wade.

[It] both formalized actions I announced right after the decision, as well as adding new measures today.

You’ve all probably had a chance to the read the decision and the dissent.

The majority rattles off laws from the 19th century to support the idea that Roe was historic- — was a historical anomaly because states outlawed abortion in the 1880s, toward the end.  But that’s just wrong.

The truth is today’s Supreme Court majority that is playing fast and loose with the facts.  Even 150 years ago, the common law and many state laws did not criminalize abortion early in pregnancy, which is very similar to the viability line drawn by Roe.

This is the horrific reality that Roe sought to end.  The practice of medicine should not — emphasize — should not be frozen in the 19th century.

That wasn’t about the Constitution or the law.

It was about a deep, long-seething antipathy towards Roe and the broader right to privacy.  As the justices wrote in their dissent, and I quote, “The majority has overruled Roe and Casey for one and only one reason: because it has always despised them, and now it has the votes to discard them.”  End of quote.

So, what we’re witnessing wasn’t a constitutional judgment.  It was an exercise in raw political power.  On the day the Dobbs decision came down, I immediately announced what I would do.

But I also made it clear, based on the reasoning of the Court, there is no constitutional right to choose.  Only the way — the only way to fulfill and restore that right for women in this country is by voting, by exercising the power at the ballot box.

Let me explain.  We need two additional pro-choice senators and a pro-choice House to codify Roe as federal law.  Your vote can make that a reality.

I know it’s frustrating and it made a lot of people very angry.  But the truth is this — and it’s not just me saying it; it’s what the Court said: When you read the decision, the Court has made clear it will not protect the rights of women.  Period.  Period.

After having made the decision based on a reading of a document that was frozen in time in the 1860s, when women didn’t even have the right to vote, the Court now — now — practically dares the women of America to go to the ballot box and restore the very rights they’ve just taken away.

One of the most extraordinary parts of the decision, in my view, is the majority writes, and I quote, “Women…” — it’s a quote now, from the majority — “Women are not without electoral or political power.  It is noteworthy that the percentage of women who registered to vote and cast a ballot is consistently higher than the percentage of the men who do so.”  End of quote…


That’s another way of saying that you, the women of America, can determine the outcome of this issue.

I don’t think the Court or, for that matter, the Republicans who for decades have pushed their extreme agenda have a clue about the power of American women.  But they’re about to find out, in my view.

It’s my hope and strong belief that women will, in fact, turn out in record numbers to reclaim the rights that have taken from them by the Court.

And let me be clear: While I wish it had not come to this, this is the fastest route available.  I’m just stating a basic, fundamental notion.

The fastest way to restore Roe is to pass a national law codifying Roe, which I will sign immediately upon its passage at my desk.

And we can’t wait.  Extreme Republican governors, extreme Republican state legislatures, and Republican extremists in the Congress overall — all of them have not only fought to take away the right — our rights — but they’re now determined to go as far as they can.

Now the most extreme Republican governors and state legislatures have taken the Court’s decision as a green light to impose some of the harshest and most restrictive laws seen in this country in a long time.  These are the laws that not only put women’s lives at risk, these are the laws that will cost lives.

What we’re witnessing is a giant step backwards in much of our country.  Already, the bans are in effect in 13 states.   Twelve additional states are likely to ban choice in the coming weeks.  And in a number of these states, the laws are so extreme they have raised the threat of criminal penalties for doctors and healthcare providers.  They’re so extreme that many don’t allow for exceptions, even for rape or incest.  Let me say that again: Some of the states don’t allow for exceptions for rape or incest.

This isn’t some imagined horror.  It’s already happening.  Just last week, it was reported that a 10-year-old girl was a rape victim in Ohio — 10 years old — and she was forced to have to travel out of the state, to Indiana, to seek to terminate the [pregnancy] and maybe save her life.  That’s — the last part is my judgment.  Ten years old.  Ten years old.  Raped, six weeks pregnant.  Already traumatized.  Was forced to travel to another state.  Imagine being that little girl.  Just — I’m serious — just imagine being that little girl.  Ten years old.

Does anyone believe that it’s the highest majority view that that should not be able to be dealt with, or in any other state in the nation?  A 10-year-old girl should be forced to give birth to a rapist’s child?  I can tell you what: I don’t.  I can’t think of anything as much more extreme.

The Court’s decision has also been received by Republicans in Congress as a green light to go further and pass a national ban.  A national ban.  Remember what they’re saying.  They’re saying there’s no right to privacy, so therefore it’s not protected by the Constitution, so leave it up to the state and the Congress, what they want to do.

And now my Republican friends are talking about getting the Congress to pass a national ban.  The extreme positions that they’re taking in some of these states.  That will mean the right to choose will be illegal nationwide if, in fact, they succeed.  Let me tell you something: As long as I’m President, it won’t happen, because I’ll veto it.

So the choice is clear.  If you want to change the circumstances for women and even little girls in this country, please go out and vote.  When tens of millions of women vote this year, they won’t be alone.  Millions and millions of men will be taking up the fight alongside them to restore the right to choose and the broader right to privacy in this nation, which they denied existed.  And the challenge from the Court to the American women and men — this is a nation.  The challenge is: Go out and vote.  Well, for God’s sake, there’s an election in November.  Vote, vote, vote, vote.  Consider the challenge accepted, Court.

But in the meantime, I’m signing this important executive order.  I’m asking the Justice Department that, much like they did in the Civil Rights era, to do something — do everything in their power to protect these women seeking to invoke their right:

In states where clinics are still open, to protect them from intimidation.

To protect the right of women to travel from a state that prohibits seeking the medical attention that she needs to a state to provide that care.

To protect a woman’s right to the FDA-approved — Federal Drug Administration-approved medication that’s been available for over 20 years.

The executive order provides safeguards to access care.  A patient comes into the emergency room in any state in the union.  She’s expressing and experiencing a life-threatening miscarriage, but the doctor is going to be so concerned about being criminalized for treating her, they delay treatment to call the hospital lawyer who is concerned the hospital will be penalized if a doctor provides the lifesaving care.  It’s outrageous.  I don’t care what your position is.  It’s outrageous, and it’s dangerous.

That’s why this executive order directs the Department of Health and Human Services — HHS — to ensure all patients, including pregnant women and girls experience pregnant — experiencing pregnancy loss get emergency care they need under federal law, and that doctors have clear guidance on their own responsibilities and protections no matter what the state — no matter what state they’re in.

Justice Thomas himself said that under the reasoning of this decision — this is what Justice Thomas said in his concurring opinion — that the Court “should reconsider the constitutional right to contraception — to use contraception even among married couples.

What century are they in?  There used to be a case called –[Griswold v. Connecticut], which was declared unconstitutional in the late ‘60s.  It said a married couple in the privacy of their bedroom could not decide to use contraception.

And equally important, this executive order protects patient privacy and access to information, which looking at the press assembled before me, probably know more about it than I do.  I’m not a tech guy.  I’m learning.

But right now, when you use a search engine or the app on your phone, companies collect your data, they sell it to other companies, and they even share it with law enforcement.  There’s an increasing concern that extremist governors and others will try to get that data off of your phone, which is out there in the ether, to find what you’re seeking, where you’re going, and what you’re doing with regard to your healthcare.

And the executive order strengthens coordination at a federal level.  It establishes a task force, led by the White House Department — and the Department of Human Services, focused specifically on using every federal tool available to protect access to reproductive healthcare.

You know, let me close with this: The Court and its allies are committed to moving America backward with fewer rights, less autonomy, and politicians invading the most personal of decisions.  Remember the reasoning of this decision has an impact much beyond Roe and the right to privacy generally.

Marriage equality, contraception, and so much more is at risk.  This decision affects everyone — unrelated to choice — beyond choice.  We cannot allow an out-of-control Supreme Court, working in conjunction with the extremist elements of the Republican Party, to take away freedoms and our personal autonomy.

The choice we face as a nation is between the mainstream and the extreme, between moving forward and moving backwards, between allowing politicians to enter the most personal parts of our lives and protecting the right to privacy — yes, yes — embedded in our Constitution.

(The executive order is signed.)