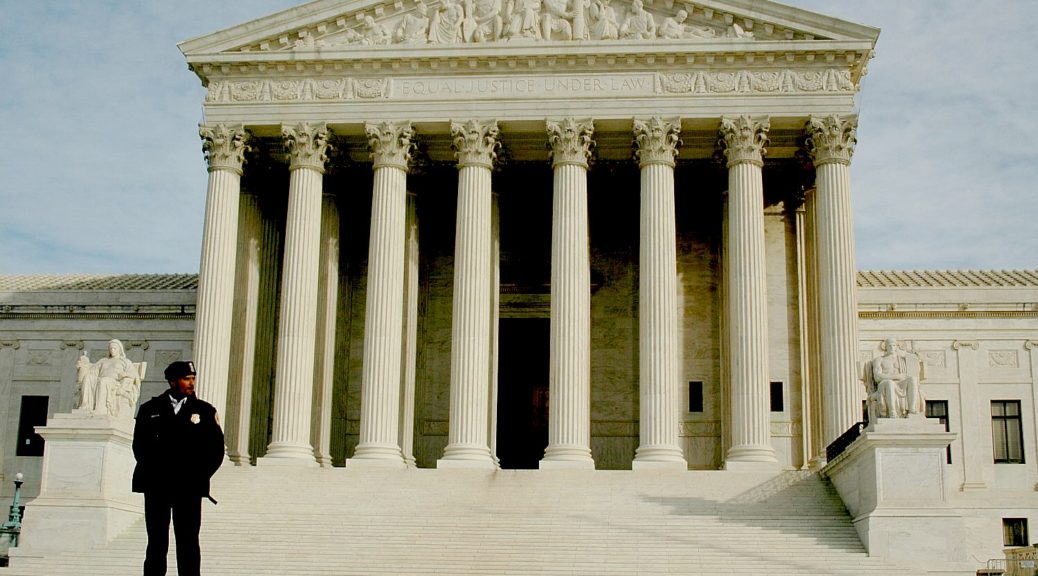 The question that came to my mind as I listened to Natanya Briendel, director of the Westchester Division at the Pace Women’s Justice Center, speak at the monthly meeting of Reach Out America, a Long Island-based activist group, was how Donald Trump and Attorney General Jeff Sessions’ roundups of undocumented immigrants rests on a concept that the Constitution – specifically due process – does not apply to non-citizens. Technically, then, any foreigner in the United States could be picked up and denied habeas corpus – the right to appear speedily in front of a judge, hear the charges and put up a defense.

She described situations where people are being rounded up based on an accusation, and if they are undocumented, immediately incarcerated and deported.  No warrant. No reasonable cause to justify a search. No right to legal counsel or even a hearing before a judge.

Even people who are claiming asylum based on escaping violence in their home country, are treated as if they were criminals.

The result has been sheer terror for the 11 million undocumented immigrants in this country. Why so many? Because Republicans going back to Reagan have refused to establish a workable immigration program; during Obama’s Administration, the House Republicans literally shoved a Comprehensive Immigration bill in the desk and never voted on it. Employers have benefited from having a pool of people who are abused, cheated, and treated like indentured servants.

Here in Long Island, we have an instance where just being Hispanic renders a high school student vulnerable to accusations of membership in the dreaded M-13 gang based on what colors you wear to school.

Donald Trump in his national security speech (really a rehash of his dystopian inaugural address), equates all immigrants as terrorists, regardless if they have lived, worked and paid taxes in the United States for decades, describing the need to shut off refugees, cancel DACA, end the possibility of family members obtaining legal status. Even individuals currently serving in the military, who were promised citizenship at the end of their tour, will be subject to deportation.

Our strategy advances four vital national interests.  First, we must protect the American people, the homeland, and our great American way of life.  This strategy recognizes that we cannot secure our nation if we do not secure our borders.  So for the first time ever, American strategy now includes a serious plan to defend our homeland.  It calls for the construction of a wall on our southern border; ending chain migration and the horrible visa and lottery programs; closing loopholes that undermine enforcement; and strongly supporting our Border Patrol agents, ICE officers, and Homeland Security personnel.”

The callousness, the stupidity, the sheer contradiction of American values, principles, and law.

Meanwhile, 12,762 DACA recipients – 122 a day – have lost their protected status since September 5, when President Trump rescinded the executive order that protected immigrants who arrived here as children from deportation, who were raised in the United States which is the only country they know. Trump gave a deadline of March, but the Republican Congress has shown it doesn’t actually care. Trump has reneged on the “deal” he appeared to make with Schumer and Pelosi; Democrats have threatened to use the only leverage they have – shutting down government by refusing to reauthorize a budget resolution – but that is unlikely.

Immigrants are no longer welcome. That is, unless the immigrant can buy a visa by investing $500,000 in a Trump family real estate venture,  or a migrant imported to work at Mar-a-Lago (when there are tens of thousands of Puerto Rican hotel workers who lost their jobs after Maria and have sought refuge in Florida – why is he not hiring them? Answer: because they can register to vote in Florida. After all, Puerto Ricans are American citizens.)

“Critics say that if passed, the reform [of the H-2A agricultural visa program] could lead to millions of virtually indentured workers,” writes Simon Davis-Cohen in Truthout. (“Republicans Push Bill to Strip Migrant Workers of Their Few Rights, Undercut US Workers”)

On the other hand, the way Trump and Sessions are inflicting their might, it means that undocumented individuals are no longer protected by law – they can be physically abused by a spouse, cheated by an employer of their wages, have their children taken from them without recourse to seek custody. They have no way of protecting their civil rights, their human rights, because the courthouse has become a locus for them to be snatched up by immigration officers. They are fearful to report crimes; certainly to warn officials of any terror threats.

Here on Long Island – the very place where Trump gave a speech suggesting that police officers don’t have to be “so nice” when they stuff someone into their patrol car, the New York Civil Liberties Union filed suit against the Suffolk County Sheriff’s Office Monday, arguing that it lacks authority under state law to honor detainer requests from Immigration and Customs Enforcement (ICE). Detainers ask local officers to hold immigrants after they would otherwise be released from custody. This suit seeks the release of Susai Francis, a resident of Long Island for 21 years, where he has raised two sons, who should have been released after pleading guilty to disorderly conduct but instead was being held for ICE in a Suffolk County jail.

“Not only should local law enforcement reject the Trump administration’s anti-immigrant agenda, but state law is also clear that local law enforcement can’t violate people’s rights in order to do ICE’s bidding,” said Donna Lieberman, executive director of the New York Civil Liberties Union. “The role of local law enforcement is to protect and serve all New Yorkers, and that is incompatible with the unlawful detention of our neighbors and family members at the behest of the Trump deportation machine.”

The day before Trump gave his national security speech calling again for a border wall and shutting down immigration, and offering not a crumb of possibility of the comprehensive immigration reform that should have been in place for 30 years so that people can get some legal status and not live in the shadows where they can be exploited, was United Nations International Migrants Day. Not a peep from the White House. Instead, the United States announced it would end participation in the UN process to develop a Global Compact on Migration (GCM) based on the claim that it would undermine “sovereignty”.

With civil war, ethnic conflict, gang violence, drought, famine, floods, wildfires and climate disasters, there are the largest number of refugees and displaced people in numbers not seen since World War II: 40 8 million displaced people worldwide as a result of conflict and violence at the end of 2015; an estimated 64 million are impacted by climate.

Immigrants are lumped together.  “You think the countries are giving us their best people? No. What kind of a system is that?”Trump said at a press conference. “They give us their worst people, they put them in a bin, but in his hand when he’s picking them is really the worst of the worst.”

Trump’s view – big on a wall stretching along the southern border, a travel ban which shuts down access from six Muslim majority nations (none of which have been responsible for terrorism in the US), reducing the number of refugees who will be accepted to a trickle (45,000) while threatening to throw out others (Haitians, Nicaraguans) – is to pull up the drawbridge, much like the Soviet Union’s Iron Curtain or China’s Bamboo Curtain, and keep us equally isolated and ignorant, reciting the Trump mantra of America’s Greatness.

Combined with banning words and phrases at agencies, scrubbing reports and websites, spying on federal workers, Trump’s declaration is more ominous: “With this strategy, we are calling for a great reawakening of America, a resurgence of confidence, and a rebirth of patriotism, prosperity, and pride.

It is more: the disdain for civil rights for noncitizens within our borders means that the Trump Doctrine, which we now know is purely transactional, means that there is zero interest in upholding human rights.

“We want strong alliances and partnerships based on cooperation and reciprocity.  We will make new partnerships with those who share our goals, and make common interests into a common cause.  We will not allow inflexible ideology to become an obsolete and obstacle to peace.”

Trump’s view, enabled by the Republican Congress, is so warped. But there is another way: reauthorize DACA with a path to citizenship; provide legal status (not citizenship) for people who came illegally but who have worked and made homes here and have no significant criminal record, particularly the parents of DACA recipients and American children; have vetting for travelers, but accept travelers; exercise moral responsibility in accepting refugees, helping resettle refugees, and contributing funds toward refugee communities. And participate in the world to reduce the causes for refugees, migrants and immigrants: help end the conflicts and violence that sets people on their precarious journey; address climate change that is resulting in communities being uninhabitable; and advance the quality of life in these countries.

None of these generators of the desperation that motivates people to uproot their lives and take a treacherous journey to a strange place are satisfied by Trump’s “national security strategy” which puts American First and to hell with the rest of the world.