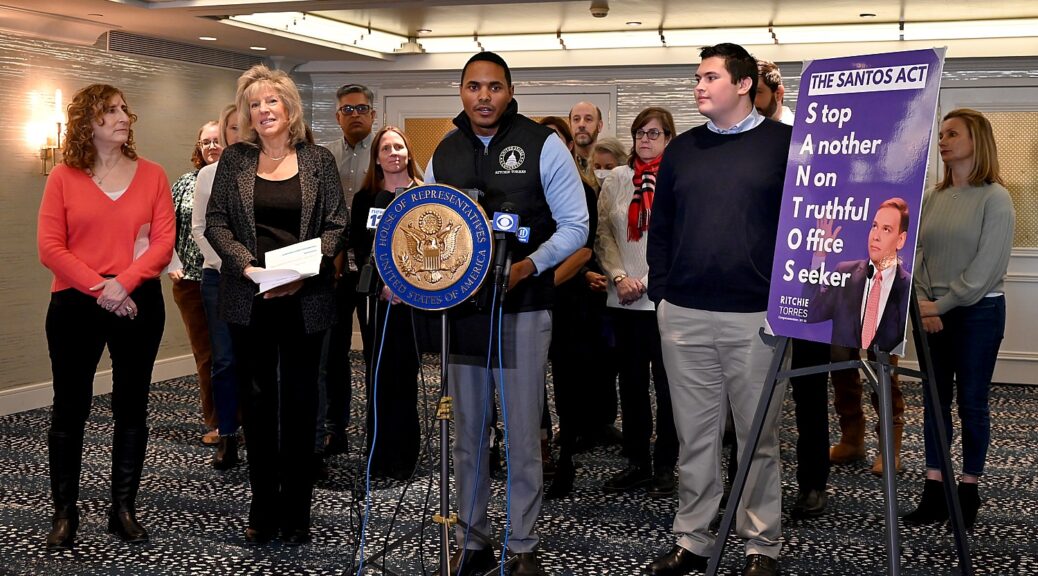 Against a drip, drip, drip of new sensational scandals involving George Santos, and the continuing campaign to pressure on George Santos to resign or Speaker Kevin McCarthy to hold a vote to expel, Congressman Ritchie Torres (NY-15) joined Concerned Citizens of NY-03 in Great Neck to demand the Federal Election Commission launch an investigation into potential illegal activity and irregularities surrounding his campaign finances.

Torres, the Bronx Democrat who introduced the SANTOS Act which would punish candidates who knowingly lie to voters about their background, outlined a web of incestuous relationships between Santos’ campaign, the Devolder Organization, Redstone Strategies and NY Rising.

“Given what we know through public reporting, it is outrageous to me that Mr. Santos was even allowed to be sworn in officially as a member of the U.S. House of Representatives,” said Rep. Torres. “But now, there are serious questions that need to be answered surrounding the way in which he supposedly financed his illegitimate campaign for elected office that was built on a web of deception encompassing nearly every facet of his professional and personal life. The American people – and the people of New York’s third congressional district – deserve to be represented by someone who will serve them with honesty, transparency, and integrity. Rep. Santos has proven himself to be not only a habitual liar who’s supremely unqualified to be serving in Congress, but someone who desperately needs to be held accountable for breaking the public’s trust and potentially breaking the law.”

In a letter sent to the chair of the FEC, Rep. Torres requests an investigation into the questionable relationship between Rep. Santos’s campaign and RedStone Strategies, an unregistered fundraising entity whose apparent practices on behalf of the Santos campaign might have contributed to multiple violations of the Federal Election Campaigns Act (FECA) as reported recently by the New York Times.

Rep. Torres was joined in his calls for an FEC investigation by members of Concerned Citizens of NY-03, a new nonpartisan group of residents organized around the sole mission of upholding congressional integrity and having Rep. Santos removed from office.

“We are delighted that Rep. Ritchie Torres accepted our invitation to visit NY-03 so we can thank him for his leadership and encourage the FEC to take action to hold Rep. Santos accountable,” said Jody Kass Finkel, founder of Concerned Citizens of NY-03.

“It’s a shame that Speaker Kevin McCarthy thinks it is okay for the more than 700,000 people who live in this district to have no legitimate representation. Rep. Torres understands how insulting it is for us to be told to ‘Live with it. Get over it. Your voice does not matter.’ We will not be silent and deserve to have a representative who tells us the truth. We look forward to our ongoing collaboration with Rep. Torres to deliver accountability for the people of this district and to finally get Santos the squatter evicted from office once and for all.”

The call for an FEC investigation is just the latest action Rep. Torres has taken to hold Rep. Santos accountable for his growing web of deception that is currently the subject of multiple law enforcement investigations. He previously filed an official complaint against him with the House Ethics Committee and is continuing to demand that Republican House leadership publicly explain what they knew and when about Santos’s seemingly never-ending trail of lies.

Rep. Torres is also sponsoring new legislation that would punish candidates for federal office who knowingly lie to voters about their background.

Meanwhile, Nassau County Legislator Josh Lafazan, who was one of the first to demand the U.S. Attorney investigate Santos’ fraudulent campaign finances and disclosures, is now calling for the Department of Homeland Security to revoke Santos’ passport, deeming Santos a high-profile “flight risk”.

“While local, state, and federal prosecutors approach potential indictments against George Santos, international authorities in Brazil have also reopened his criminal case. Given Mr. Santos potentially faces years in prison, there is significant concern that he may eventually seek safe harbor within a country lacking an extradition treaty with the U.S.,” Lazafan stated.

Kevin McCarthy who needed Santos’ vote to fulfill his dream of becoming Speaker and is too fearful to see his margin be whittled down to four, said it would be up to NY3rd constituents to remove Santos (that is, in 2024), while  3rd District constituents continue to rally, protest, petition, calling for Congress to expel Santos.

McCarthy made clear that he values politics and power, not ethics or care to serve the interests of the people, as his Golden Rule. It is almost as if McCarthy has nothing but disdain for actual representation. The whole is more than the sum of its parts, in this case, the Republican caucus, and the ends justify the means. Which makes his Republican caucus’ obsession with investigating Hunter Biden, everything Biden, the January 6 investigators, the FBI all the more shameless and hypocritical.

McCarthy has been careful to bolster Santos, especially because Santos provided the key vote to fulfill his ambition to become Speaker, and has dismissed every allegation, even that a Santos fundraiser impersonated McCarthy’s own aide to stir up donations, with the claim that the investigations have to play out, that everyone deserves due process – expecting the process to last through a two-year Congressional term (just look at the January 6 prosecutions).

And in a big middle finger to the district, the nation, and the institution, McCarthy decided to appoint Santos to two committees: the Small Business committee (because he’s such a genius at “investing in himself” to go from $55,000 to millions of dollars overnight) and the Committee on Space, Science and Technology (where he can do Trump’s bidding and stick it to social media giants, vote to rescind funding for research and development, for renewable energy).

That prompted some to suggest another path for removing Santos: Get every chamber of commerce to start letter writing campaign to have him removed. He can’t represent their interest because of his deceit in everything including his own business.

McCarthy chose to give Santos two important committee assignments despite the precedent of a member under a cloud of investigation being removed from a committee while it plays out, and despite the level of intensity against Santos, who has been referred to the house Ethics committee and the outside, independent committee on Ethics, even as he is under investigation by the U.S. Attorney, New York Attorney General, Nassau County and Queens County district attorneys and the Federal Election Commission.

“This is an extraordinary vote of confidence by McCarthy in Santos,” noted NBC’s senior Capitol Hill correspondent Garrett Haake.

Think about it: this fraudster whose real resume includes working for a Ponzi scheme that bilked investors out of $17 million, is in a position to affect small business funding (think PPP). And as a member of the Space, Science & Technology committee, he is in a position to extort “campaign” funding from Big Tech in exchange for favorable or unfavorable policies on the social media giants, Elon Musk’s Tesla and Space X, and every institution wanting to get funding for research and development.

Meanwhile, local Republicans have tried to insulate themselves from Santos’ stain on their election prospects by calling for him to resign (knowing that won’t happen), and saying they will refuse to work with him, which will cost the district millions of dollars in federal aid that an effective Congressmember with integrity can bring home.

Besides the $174,000 salary plus per diems for being a Congressman – the most this deadbeat has ever seen – campaign donations present an irresistible bottomless piggybank. He is a vulnerable target for bribery, blackmail and extortion, and a national security risk.

“This country never had imposter seated in Congress before, and with ties to Russian oligarch and questionable finances,” Jody Kass Finkel said at the press conference with Torres. “Santos deceived voters. A liar, cheater, probably criminal. We deserve real representative, not a charlatan. McCarthy insults the 700,000 district residents by [ignoring Santos scandal], instead, says, “Live with it, get over it.

“Well, we aren’t… We understand McCarthy has a narrow majority, but the Speaker does damage to our representative form of government, to our democracy. He says he cares about voter fraud. How about the fraud perpetrated on 700,000 people of district.”

What is McCarthy afraid of, she wondered. “Recent elections show NY3 is competitive, if a free and fair election. But if Santos doesn’t pull out, we lose. How hard will it be for Republican to win a seat after two years of drip, drip revelations, or any Republican for any seat?”

“There are 535 in Congress. Of the 535, no one poses greater threat to integrity of Congress as institution than Santos,” Torres declared.

“My message to Santos: this will not end well for you. Resign to end this nightmare for the nation and the 3rd district, denied representation they deserve.”

Santos, he said, either resigns under the weight of scrutiny or a plea bargain with the U.S. Attorney. “He knows he is facing local, state, federal and international investigations. The one that will be the quickest is the US Attorney.

“Stop perpetuating suffering and humiliation of constituents. Allow someone capable of serving in government to step in.”