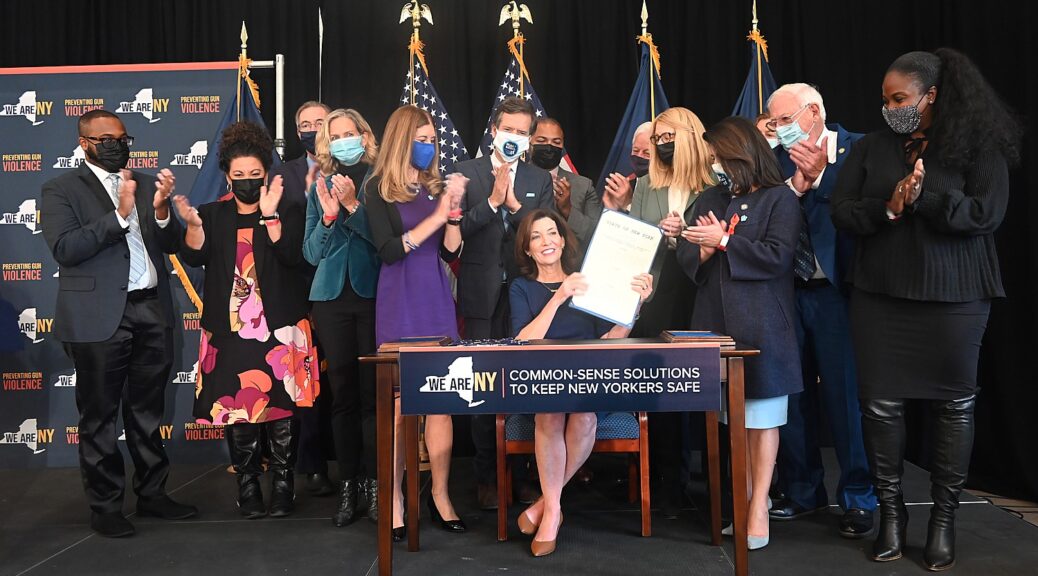 “Gun violence is a public health and public safety crisis that must be dealt with aggressively,” said Governor Hochul. “Working with partners at all levels, my administration will continue to crack down on the distribution and possession of dangerous weapons and put an end to the gun violence epidemic.”

“If you can’t pass a background check to get a gun, then you shouldn’t be able to get a gun–period. For too long, the unfinished receiver loophole let anyone get their hands on all the parts needed to build an untraceable, unregistered AR-15 without ever going through a background check, but today, we’re taking historic action here in New York to close that dangerous loophole for good” said State Senator Anna M. Kaplan.

“I’m proud to be the sponsor of the Scott J. Beigel Unfinished Receiver Act because I know it’s going to save lives, just like Scott Beigel did when he gave his life to protect his students from gunfire during the attack on Marjory Stoneman Douglas High School. I’m grateful for my partners in this effort, Governor Kathy Hochul, Senate Majority Leader Andrea Stewart-Cousins, Senator Brad Hoylman, Assemblymember Chuck Lavine, and Assemblymember Linda Rosenthal, each of whom have shown extraordinary leadership to make sure our state is combating the scourge of gun violence. And most importantly, I want to thank Scott Beigel’s parents Linda and Michael, for never giving up the fight to ensure that our communities are safe from gun violence.”

State Senator Brad Hoylman said: “In the last three years, we’ve seen a 479% increase in ghost gun seizures across the state. Thanks to the Jose Webster Untraceable Firearms Act being signed today we’re addressing this growing problem by banning the sale and possession of ghost guns, so nobody will be able to purchase these firearms without first passing a background check. I’m deeply grateful for the advocacy and support of Jose Webster’s sister, Nathalie Arzu, along with Assembly Member Rosenthal, Senator Kaplan, Assembly Member Levine, Senate Majority Leader Stewart-Cousins and Governor Hochul for their leadership on this important issue.”

During the COVID-19 crisis, gun violence has spiked; so have sales of firearms and ghost guns. At the beginning of the pandemic, gun manufacturers reported massive sales of ghost gun kits; at least 16 manufacturers told customers they were experiencing shipping delays due to a high volume of orders.

Ghost guns continue to pose a threat, both in New York and nationwide. Last week, a Queens man who had been ordering gun parts online was caught with an arsenal of do-it-yourself “ghost guns”. ProPublica reported that the “Boogaloo Boys,” a right-wing militia group involved with the January 6 Capitol riots, have embraced ghost guns as one of their preferred weapons.

“The Scott J. Beigel Unfinished Receiver Act”, sponsored by Senator Anna M. Kaplan and Assemblymember Charles Lavine, specifically addresses the proliferation of “unfinished receivers” or “80% Receivers” which can be purchased online without a background check and which are easily converted into operable firearms by people with limited skills. The legislation:

“Amidst an epidemic of gun violence plaguing the United States, I commend my good friend Governor Kathy Hochul for supporting and signing this bill which I sponsored in the Assembly,” said Assemblymember Charles Lavine. “It is incumbent upon the states to enact common-sense reforms that close dangerous loopholes that allow untraceable weapons to flood our communities.  This new law further strengthens New York’s existing gun safety laws, already among the toughest in the country.  It also significantly increases protection to our community and our children by creating much more accountability.  It is intended, just as Scott intended, to save lives.”

Senator Kaplan and Assemblymember Lavine’s legislation is named in memory of Scott J. Beigel, the hero teacher of Marjory Stoneman Douglas High School in Parkland, Florida, who lost his life during the shooting over three years ago while shielding his students from gunfire. Beigel’s parents, Linda Beigel Schulman and Michael Schulman of Long Island, are nationally recognized advocates in the fight against gun violence.

Speaking to the crowded room  at the “Yes We Can” community center in Westbury, Long Island, Linda Beigel Schulman reflected back to Feb 13, 2018, when she spoke to Scott, exchanged, “I love yous” and “Have a good rest of today. I’ll speak to you tomorrow.” “He walked into Marjory Stoneman Douglas High School and gave his last breath after saving lives. A 19 year old shot him 16 times with an AR15 assault rifle. I made a vow to myself and my son to do everything to end gun violence…Nothing will bring Scott back, but these new laws today will save lives.”

“The Jose Webster Untraceable Firearms Act” sponsored by Senator Brad Hoylman and Assemblymember Linda Rosenthal, prohibits the sale and possession of unregistered ghost guns and ensures law enforcement will be able to track the manufacture and sale of all guns in New York. The legislation:

“Ghost guns have exploded in popularity as people have taken to the internet to evade New York’s strong laws requiring background checks and licensing, to gain access to deadly weapons they can construct in the comfort and privacy of their own homes,” said Assemblymember Linda B. Rosenthal. “Closing the ghost gun loophole by signing the Jose Webster Untraceable Firearms Act, along with the Scott J. Beigel Unfinished Receivers Act, will help to keep our communities safe. Thank you to Governor Hochul for signing these bills into law. I look forward to working with the Executive to passing more legislation to keep New Yorkers safe from gun violence in the future.”

Senator Hoylman and Assemblymember Rosenthal’s legislation is named in memory of Jose Webster, a young man from The Bronx killed by gun violence in 2011. Webster’s sister, Nathalie Arzu, has become a gun violence prevention advocate.

The Jose Webster Untraceable Firearms Act, S.14a, will take effect in 180 days. There is a six month grace period to turn in ghost guns or have them registered and serialized.

Legislation S.7152/A.6522 adds firearms capable of being concealed and designed to resemble toys to the definition of a ‘disguised gun’ and prohibits their manufacture, design, or sale. Weapons capable of causing severe injury and death but that resemble toys are unjustifiably deceptive, and pose a clear threat to the safety of both children, who may mistake them for actual toys, and the public at large.

“The gun violence epidemic has stolen the lives of so many in our state and country, and we have only seen the problem grow worse in recent years,” said Senator John Brooks. “Common sense measures like this legislation to crackdown on disguised guns are critical to protecting New Yorkers. No one should live in fear of gun violence, not when walking down the street, serving our communities in law enforcement, while learning at schools, spending time at home, or anywhere else. I am thankful to local law enforcement for the support they provided in getting this bipartisan bill passed and I applaud Governor Hochul for her continued effort to keep New Yorkers safe.”

“I am proud to sponsor this critically important legislation that will prohibit the design, manufacture and possession of disguised guns in New York State,” said Assemblymember Steve Stern. “These weapons put our law enforcement personnel at a dangerous disadvantage in situations when they are facing down the barrel of a gun and have a split second to decide if it is a toy or a real weapon, a split second that could make the difference between life or death. This legis will protect our entire community and save lives.  I thank my colleagues in the Legislature for their bi-partisan support of this legislation and applaud Governor Hochul’s strong leadership on this important issue.”

Nassau County Executive Laura Curran, speaking directly to Linda Biegel Schulman and husband Michael: “I know your story, your pain, and the fact you are out everyday to fight for common sense gun laws is inspiring. Nassau County is rated the safest community in America for two years in a row. But I won’t rest until everyone in county feels it is the safest.”

“This is a new era of collaboration, we are changing things. What we accomplished solidifies New York as having the toughest gun laws in the nation.”

© 2021 News & Photo Features Syndicate, a division of Workstyles, Inc. All rights reserved. For editorial feature and photo information, go to www.news-photos-features.com, email [email protected]. Blogging at www.dailykos.com/blogs/NewsPhotosFeatures. ‘Like’ us on facebook.com/NewsPhotoFeatures, Tweet @KarenBRubin