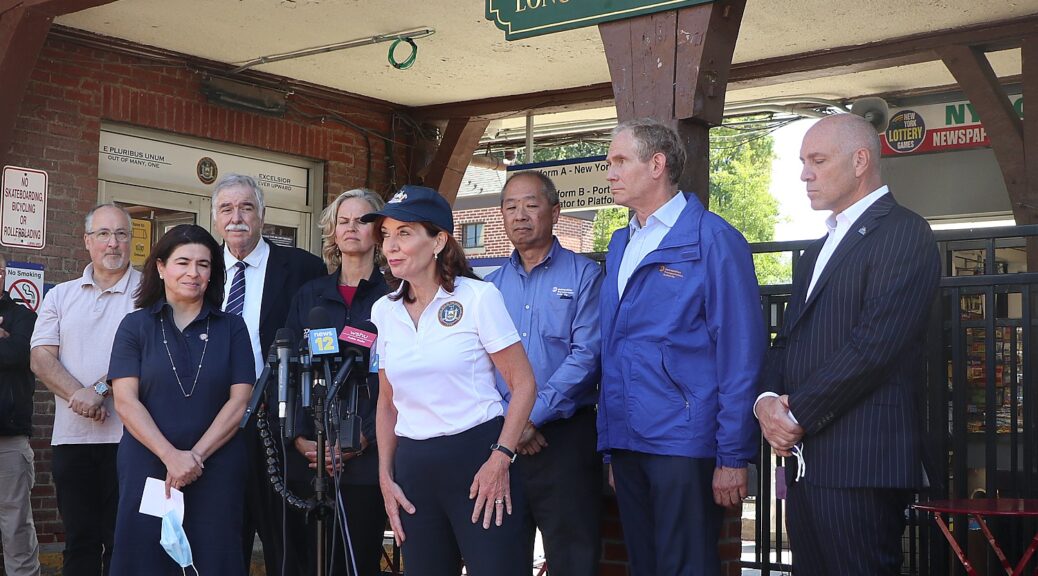 Governor Kathy Hochul: “One thing I want to make clear: we’re not treating this as if it’s not going to happen again for 500 years. What we saw, the record rainfall that precipitated, the situation out here in Great Neck as well as what we’ve seen all the way from here to Suffolk to the five boroughs to Rockland to Putnam to Westchester, it was an unbelievable amount of rainfall in an incredibly short amount out of time.”

Hochul: “We know how to build resiliency. … Many of our coastal areas are in a far better place to be able to handle the wind and wave action. … But what we’re not prepared for and what I’m not satisfied with, what’s happening on our streets at the higher elevations. … The raging flood waters cannot be contained by the existing storm sewers and drainage systems, and then the flood starts going into our subway system. That’s what happened here. It happened all over Long Island. It happened in New York City and our surrounding counties. That’s what we have to address.”

Thank you for joining us as we continue our survey of storm effects and also now the cleanup and what I was just witnessing moments ago was an extraordinary effort by the incredible team literally a few feet away who worked through this morning and through the night to try and restore service here on Long Island and Nassau County and here in the Great Neck Station.

“The Port Washington Line has been disrupted considerably and they are working tirelessly to restore the tracks so they are safe once again and they anticipate in the next few hours they’ll be able to make some announcements on that timing so that’s something I just saw, but I want to thank the incredible leaders who are with me here today…

“What we saw last night was nothing short of unprecedented. I cannot imagine a community having gone through this before. In fact we were told it was a 500-year event. I’m not sure how they know that; I’m not sure who was here 500 years ago to tell us that but that is the scale we’re talking about.

“One thing I want to make clear: we’re not treating this as if it’s not going to happen again for 500 years. What we saw, the record rainfall that precipitated, the situation out here in Great Neck as well as what we’ve seen all the way from here to Suffolk to the five boroughs to Rockland to Putnam to Westchester, it was an unbelievable amount of rainfall in an incredibly short amount out of time.

“We’re talking about literally from 8:50 p.m. to 9:50 p.m. last night, a record shattering rainfall, at LaGuardia, JFK, at Central Park. Records are broken, but what is fascinating is that the records that they broke were literally set a week before. That’s what we’re dealing with now, my friends, so when we talk about how is this happening, people have been warning for decades that the effect of climate change and what it would do to our communities – it’s happening right now. It is not a future threat. It is a current situation and it is the status quo.

“We know how to build resiliency. We saw that particular here on Long Island after Superstorm Sandy. Many of our coastal areas are in a far better place to be able to handle the wind and wave action. I just was down last week in anticipating the onslaught of Hurricane Henri. I was on the beaches and I saw what we had done to build up.”

Just a day earlier, as Hurricane Ida barreled through the south up toward the Northeast, Governor Hochul joined 8 other governors to Congressional Leadership urging passage of impactful climate actions.

Governor Kathy Hochul and nine other Governors today issued a letter to House Speaker Nancy Pelosi and Senate Majority Leader Charles Schumer urging the passage of both the bipartisan infrastructure deal and a bold reconciliation bill that meets the urgency of the moment and tackles the climate crisis. The Governors urge Congress to prioritize key elements of President Biden’s Build Back Better Agenda that will have the most impact in protecting the climate, including programs that support a carbon free grid, the electrification of the transportation system, and investments in climate resilience. The Governors also request that 40 percent of the benefits of the climate and clean infrastructure investments included in these legislative packages are directed to disadvantaged communities.

Here is the full text of the letter:

As Governors from across the country, we strongly support your joint efforts to pass landmark legislation that will create millions of good jobs, rebuild our country’s infrastructure, improve public health, advance environmental justice, and tackle the climate crisis.

Climate change is intensifying the wildfires that burn in the West, hurricanes that threaten the East, and extreme heat that endangers people and animals throughout the country. Now is the time for bold climate action. The most recent Intergovernmental Panel on Climate Change (IPCC) report details what we already know – the window for preventing irreversible climate consequences is closing and we need to act quickly and comprehensively.

As we approach the 26th United Nations Climate Change Conference of Parties (COP 26) in November, it is imperative that the United States demonstrates that America is ready to lead and solve the climate crisis. President Biden has committed America to cutting its greenhouse gas emissions to 50 percent to 52 percent below 2005 levels by 2030. America’s ability to meet this goal rests on how we respond to climate change today.

We also respectfully request that any infrastructure package ensure 40 percent of the benefits of climate and clean infrastructure investments are directed to disadvantaged communities and invests in rural communities and communities impacted by the market-based transition to clean energy. We are excited to build back better with both of you and are committed to taking action to advance this crucial agenda.