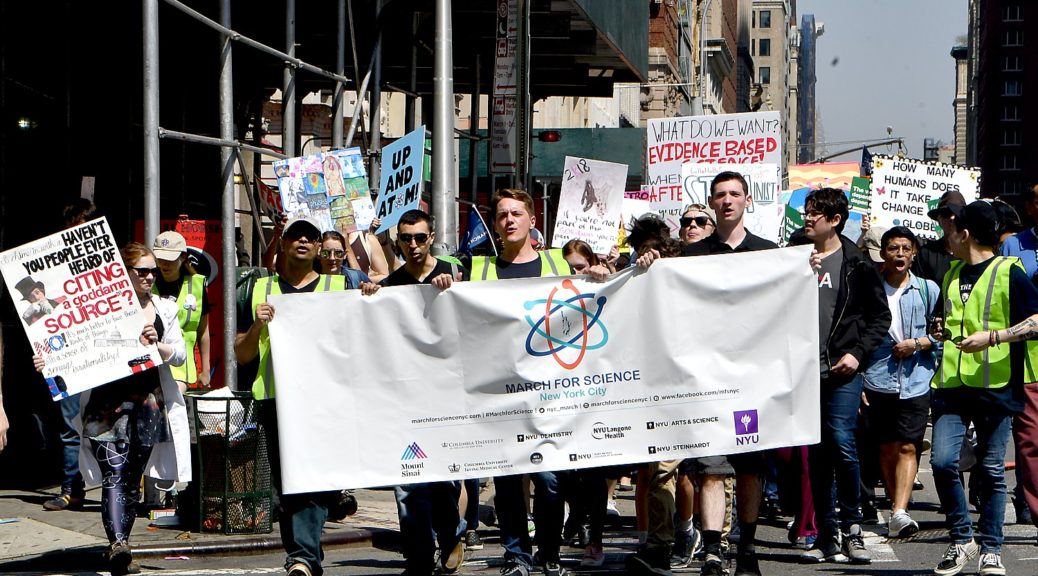 About 1,000 people gathered in Washington Square Park in downtown Manhattan for a rally, teach-in, and March for Science. Speakers, including Congresswoman Carolyn Maloney, decried the politicization of science, the censorship, banning and defunding of scientists and research, and warned that the United States will lose its economic and political leadership in the world if it loses its place on the forefront of scientific innovation and development.

All I could think about as I marched the 1.8 miles from Washington Square Park down Broadway to Zuccotti Park (famous for the Occupy Wall Street movement), is how sad, how pathetic, what an embarrassment for the United States of America to have to hold demonstrations to “Save Science.” We have regressed back to the Salem Witch Trials.

The New York City March for Science was one of many organized around the country during this Earth Month (April 22 is Earth Day). Last year, the first year of such demonstrations, brought out 1.3 million in support of  robust science research, evidence-based policies, and science education. “Today, we continue the momentum gained from last year’s inaugural march to show policy makers that the March for Science is more than a single-day event. It’s a movement.”

“The 2018 March for Science New York City recognizes the importance of an informed democracy in order to maintain a free, healthy, happy, and accessible society. That is why we come together as a community of non-partisan scientists and friends to show the importance of protecting and promoting people’s rights, the public’s access to scientific information, the environment in which we exist, and scientific research. We hope to use this march to spark increased community involvement for the promotion of science for the common good through sustained action.”

“Science is beacon to a better future, health care, technology, transport,” declared Congresswoman Carolyn Maloney (D-NY). “Devotion to science is at the root of progress in every industry, lifting people from poverty; expanding opportunity, saving lives, feeding the hungry. We will never fund a better investment.

“But Congress wants to cut funds for research, cut fuel efficiency standards. [America] is losing leadership because of cutbacks,” she said. “We have to go forward….Science took us to moon.. America is the tech, innovation leader in the world because of science. Science brought us success.

“We must support science, truth, freedom and democracy,” said Maloney, a sponsor of the Science Integrity Act to shield science from ideology.

Paul Gallay of Riverkeeper, which has helped to clean up the Hudson River and drinking water throughout the state, contrasted the backward movement by the federal government to the progress in New York State. Largely based on the data collection by Riverkeeper and other advocates, New York has allocated $3 billion to improve water infrastructure based on scientific data, and a new law that requires testing and regulation of “emerging contaminants, “because we in New York value science.

“The EPA has been decimated. Hundreds of scientists who were there in January 2017, are gone. Ideology masquerades as policy. There is no quantitative analysis, just press releases.

“You keep doing research, driving innovation and groups like Riverkeeper will fight for policies to get clean water.  And if politicians don’t, we’ll keep suing.

“We need to get politics out of science – get more active. And not just once a year. Make policies about science, not in spite of science. Pound pavement, so they can hear it in DC. Tell your state senators, local politicians to fight for science, save science,” Gallay said.

Bill Ulfeder, executive director of The Nature Conservancy, declared, “Science is what makes America great. It is essential for health, prosperity, safety, security.

“This is Earth Month (April 22 is Earth Day). Scientists, including Rachel Carson, alerted the country to the dangers of pollution, pesticides. Science informed the Endangered Species Act.

“For 65 years, the Nature Conservancy has been guided by science. We believe in the power of science to solve the problems we face – climate change, food shortage, disease. Only through science can we create a world where nature and humans thrive together.

Lauren Kurtz, Executive Director of the Climate Science Legal Defense Fund (CSLDF), charged that “Scientific facts are downplayed, rejected. Policies are advocated that run counter to known science, including climate science.” And when that happens, CSLDF, which works to protect the scientific endeavor in general and climate scientists in particular by providing legal support and resources to scientists who are threatened, harassed, or attacked for doing their job, fights back.

“We keep track: 126 incidents when the government silenced scientists. Regulations have not kept pace with science and of the health risk of certain chemicals. We want stronger rules.”

“Removing ‘climate change’ [from EPA, Department of Agriculture and other government agency sites], staffing with ideologues… undermines out competitiveness and position on the  forefront of science, leader in scientific discovery.

“We have the power to fight back – shine spotlight – call attention to misrepresentation, to speak out when censorship. March, speak out, act where can have impact such as on the local level. Vote.”

State Senator Brad Hoylman, who represents the district that New York University is in, noted “People think NY is deep blue state, that everyone smart, watches Rachel Maddow, reads NY times, understands a fact is not opinion. But things are different in Albany when comes to science. We need more evidence-based policy making.

“We know vaccinations save lives,” he said, drawing a cheer. Vaccination is one of greatest turning points in health. But when I introduced a bill to make vaccinations mandatory for elementary school children, you would have thought I called for destruction of society. The Anti-Vacs movement, even though the link between vaccines and autism has been disproved over and over again…

“Gay conversion therapy,” he continued, drawing boos.”There are mental health providers licensed by New York State who are trying to convert people from being gay. New York needs to yank their licenses.” People who are exposed to such conversion therapy, he said, “affects who they are as a person, sends a message to others, and  perpetuates myth.”

Another issue is climate change, “one of the most important issues of our time. When Trump was inaugurated, the White House page on climate change was removed. [In reaction], in Albany, we tried to pass a resolution about the danger of climate change but Republicans wouldn’t allow a vote, saying there was ‘disagreement on the validity. Science doesn’t back that up.

“We need to take this energy today and elevate public discourse, based on facts from people who know what talking about – scientists, researchers, academics, experts. Everything else is bluster…We will embrace our intellectual, academic, research to bring to bear the best policies for New York.”

Beverly Watkins, a community-based research scientist and health care provider who does “Big Picture Science” research into health disparities. “Health is a human right – growing up poor, your gender, sexual orientation, ethnic background should not have a higher rate of disease – diabetes, asthma, hypertension. Yet a difference in socioeconomic status perpetuates health disparities.”

“In a race with three centers- China, France and Canada are welcoming scientists, with the appeal, ‘America may not be a home for you.’

“America needs science. And Science needs globalization.” Take for example what happens when you destroy globalization and internationalism – Brexit. Already, Britain is experiencing an 11.8% decrease in technology investment because of its impending dissociation with the European Union.

But besides a reduction in investment, “Collaborative science is failing. There is diminished freedom to emigrate from the EU to UK.

“Democracy depends on science. Congress can’t protect us from Russian trolls, from surveillance by greedy companies. We need science to advise, create appropriate policies. If we don’t have strong science, Research & Development, our economy can’t survive.

“The good news after all the panic about [the Trump Administration’s determination to slash the science budget, it got its biggest increase, 12.2%. National Institutes of Health budget is up 8.3%; energy up 15%; NASA saw its allocation increased to $1.2 billion; the US Geological Survey’s budget was increased to $1.1 billion; EPA was allocated $8.1 billion. The American people get it.”

But Science is not just global, international and collaborative, she continued, “We need to get out of our silos to solve the biggest challenges we face – climate change, microbiological resistance, cybersecurity, robotics, water and food scarcity, safety, acidification of the oceans. The world needs globalized, collectivized, interdisciplinary science.”

“Why we march? We march for evidence-based policy; for increased diversity, inclusion in the scientific community, for meaningful engagement between science and society, to build global community of advocates for science,” David Kantor, professor of environmental studies of NYU and the coordinator for New York’s March for Science.

Here are more images from the March for Science NYC: