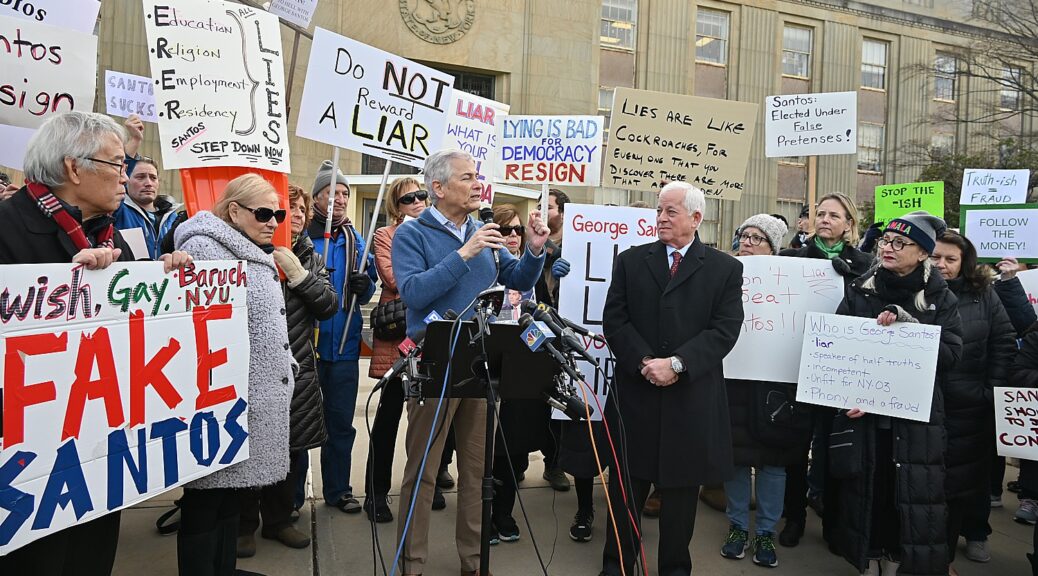 Asked if he feels cheated out of being elected to US Congress, the Democrat Robert Zimmerman who was defeated by Republican George Santos now being exposed as a fraudster who falsified his career and finances, was emphatic that it was the constituents, the political process and democracy itself Santos cheated.

“It’s not about me,” Zimmerman declared. “It’s about restoring integrity to our political process. The fact Santos thought he could get away with it – this is the antidote. The fact we’re here.”

And they came out in sizable numbers for a press conference at rally in front of the Nassau County Courthouse, calling for Santos to resign and for the Republican leadership to refuse to seat him, and carrying signs including “Make lying wrong again,” “Santos lies. Democracy dies.” “Follow the money.”

Prosecutors at the federal, state and local level have already announced investigations into how Santos, who only two years ago reported earning $55,000 a year, managed to loan his campaign $700,000 and declare income and assets in the multi-millions of dollars.

State Assemblyman Charles Lavine reflected that everyone gathered has the same trauma as any victim of a crime, a fraud, a Ponzi scheme. “the difference is the first few get some of their money back, but we, the citizens of the 3rd District are left holding the bag, the laughingstock of the United States and international community.”

Greg Leung, a youth activist from Great Neck and freshman at Boston University where he is studying political science and is thinking about entering government or politics, reflected the feelings of many young people, new voters, who have a right to be disillusioned, jaded, cynical about the political process.

“As a first generation American, in the extraordinary position of a Congressman elect, you are living the American Dream, a set of ideals that those who came before fought so vehemently to defend. The American Dream is an ideal nurtured over centuries – Government for, by the people with integrity. Lately, people like you resorted to deception to take power, eroding the American Dream you  vowed to defend in the campaign. You lied for your own gain. Most vile, you lied about the Holocaust and mass shooting…. What do you say to those around here who depend on government to protect their version of the American Dream? Resigning is the way to preserve the American Dream,” Leung said.

Linda Beigel Schulman, who is a daughter of an actual Holocaust survivor as well as the victim of her son’s murder by the Parkland shooter, “1800 days ago,” spoke of the pain and trauma of being re-victimized by Santos’ false claims of his grandparents having fled the Holocaust and having had four employees killed in the Pulse Nightclub massacre.

My father lived in Ukraine, in Kiev. He slept in the forest, in bomb craters evading Nazis for years. He went to Canada and then the US. Others in his family were not so lucky. He would not speak of it, except in an interview by Spielberg’s organization.

“It is insulting and demeaning to every child of a Holocaust survivor.  “How dare you lie about being a child of Holocaust survivors, or being Jew-ish? You lied about having four employees at Pulse. How dare he try to gain sympathy. I know all too well the sense of loss, the grief from gun violence.

“Lying has become commonplace and worse, accepted. Outright lying shouldn’t be accepted by anyone. Integrity matters,” she declared. “Lies are analogous to a virus, afflicting pain, fever, sometimes killing the host. We the people have become an infected host. If we accept lying from political leaders, it will surely destroy our fiber. The antidote is we the people, here today. We are the antidote. This country was founded on We the people, not lies.’

“This is not a matter of politics or party. It is about right versus wrong, lying versus trust, deception versus honesty. NY 3rd needs a Congressman who is honest, who we can trust.”

State Senator Anna Kaplan cast blame on the Republicans at the local and federal level who propped Santos up and who are complicit in Santos’ fraud.

“George Santos has perpetrated a complete and total fraud on our community, but we cannot forget that for the last three years, he was enabled and supported by the entire Nassau County Republican machine and his Republican running mates, many of whom sit in elected office today and others who will soon take office. The questions about exactly who George Santos are not new, but they were brushed aside and minimized by local Republicans desperate to flip this congressional seat at any cost.

“Our entire community has been victimized, and we demand accountability. George Santos must be investigated by all appropriate authorities, particularly surrounding his shady business dealings and mystery millions that seem to have appeared overnight despite having no legitimate career to speak of. The outstanding criminal charges against George Santos in Brazil must be answered for. And we all deserve an apology for his reprehensible lies about his nonexistent Jewish faith and his completely fake connection to the Holocaust.

“To allow George Santos to be seated as a member of Congress would be a further knife in the heart of this community, and I’m urging Congressional Republican leadership to stop that from happening while investigations are ongoing.”

Kaplan added, “I’m also calling on every Republican in Nassau County who stood with this man over the course of the last three years to apologize to the voters, and renounce their support, along with every organization who endorsed his candidacy.”

Lavine noted, “Each of us is a victim of fraud – whoever represents the 3rd district acts not just for 3rd but the United States. But top of the list of victims of Santos’ fraud is Robert Zimmerman.”

“I am angry and frustrated too,” Zimmerman declared. “But the answer is all of us. Standing here today, demanding a House ethics investigation, investigations at federal, state and local levels, making sure Santos does not stay in Congress. That’s not Democratic or Republican politics. It’s about protecting democracy, standing up for justice against corruption and Santos’ fraud. At stake: democracy, faith in the integrity of our political system, the American Dream.”

At least one in the crowd of hundreds was a Republican who not only voted for George Santos, but helped elect him.

Teodora Choolfaian said she left the Democratic party, registered Republican and backed Santos over the issue of COVID-mitigation in public schools. Santos came to the rallies she held, and seemed to embrace her call to end mask mandates in school.

But at the rally calling for Santos to resign, she said she believed she had been deceived by Santos. One of her concerns is the source of Santos’ funding – as recently as 2020, he reported a salary of $55,000. In this cycle, his financial disclosures reported a salary of $750,000 plus assets of millions of dollars, without accounting for the source.

She now is calling upon him to resign “Santos is worse than you think,” she told reporters.

She will tell Santos as much when she sees him at the swearing in, at the Capitol on January 3, to which she has been invited.

Indeed, Santos’ campaign finance disclosures are now being investigated by the US Attorney, the New York State Attorney General and the Nassau County District Attorney.

While a sitting congressman cannot be removed for lying about his background – though the House Ethics committee might see fit to censure him – actual federal crimes are another matter. But investigation and prosecution would take months, possibly years. So New York’s 3rd Congressional district may have to be resigned to waiting to 2024.

© 2022 News & Photo Features Syndicate, a division of Workstyles, Inc. All rights reserved. For editorial feature and photo information, go to www.news-photos-features.com, email [email protected]. Blogging at www.dailykos.com/blogs/NewsPhotosFeatures. ‘Like’ us on facebook.com/NewsPhotoFeatures, Tweet @KarenBRubin