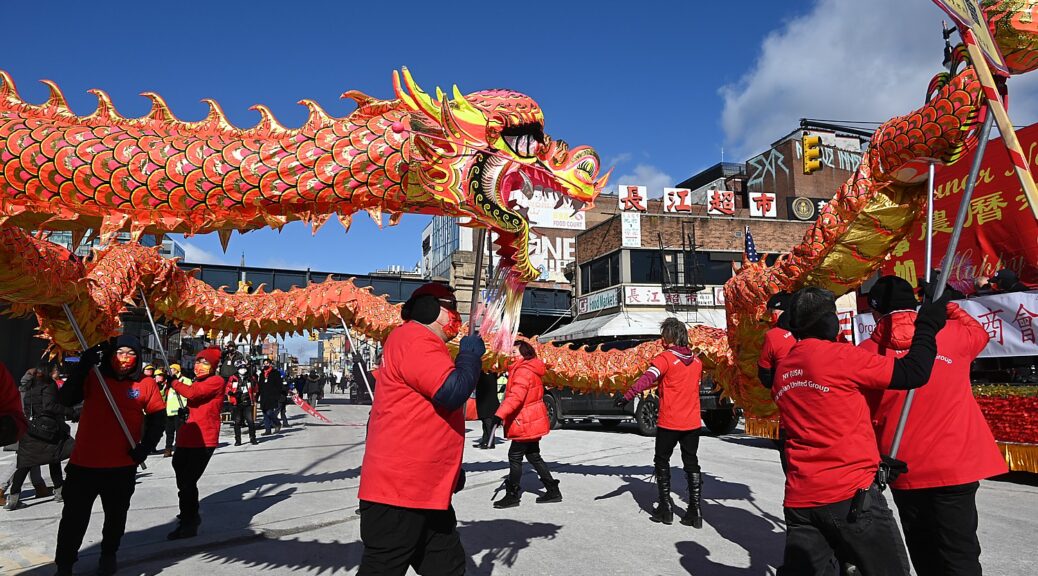 The annual Flushing Lunar New Year parade, celebrating the Year of the Tiger, returned to the city’s largest Chinatown on February 5, 2021, after a hiatus in 2020 due to the COVID-19 pandemic.

One of the oldest communities in America – settled by the Dutch in 1645 – Flushing, Queens, has become a melting pot of immigrants – predominantly from Asia but with representation from around the world. Flushing’s Chinatown, is one of the world’s largest and fastest-growing Chinatowns; it is second in size to Brooklyn’s, and is larger than Manhattan’s Chinatown and Flushing has become a center of Chinese culture.

Here are highlights of the Lunar New Year Parade:

© 2022 News & Photo Features Syndicate, a division of Workstyles, Inc. All rights reserved. For editorial feature and photo information, go to www.news-photos-features.com, email editor@news-photos-features.com. Blogging at www.dailykos.com/blogs/NewsPhotosFeatures. ‘Like’ us on facebook.com/NewsPhotoFeatures, Tweet @KarenBRubin 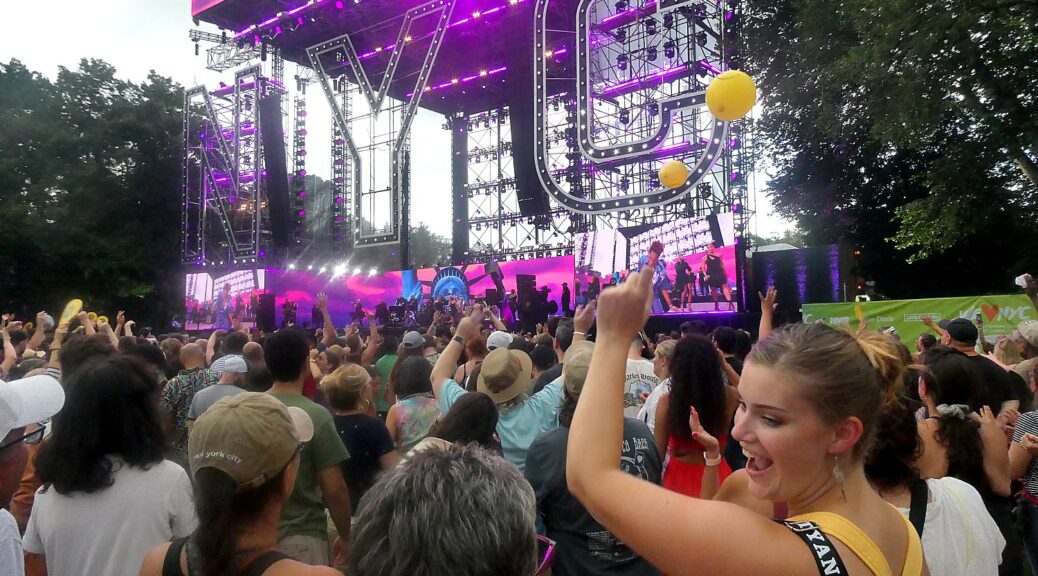 Despite being cut short midway through, the “We Love NYC Homecoming Concert” in Central Park on Saturday, August 21, was a huge success, having brought together an estimated 60,000 enthusiastic, vaccinated New Yorkers to be entertained by an A-plus list of performers, as eclectic and diverse as New York City.

New Yorkers displayed their trademark hospitality and resiliency in being packed together on the Great Lawn in a way they haven’t been allowed to for the past 18 months of the COVID-19 pandemic.

Gayle King of CBS pointed to the day that COVID-19 pandemic became real to her: when she heard of a nurse who reused her mask by turn it inside out and used a garbage bag because there was no more PPE.

“New Yorkers found a way – we were the epicenter of the virus, now the epicenter of recovery. There is a way out, even if it takes a while. We’re done with COVID but COVID is not done with us. Stay strong,” before telling the crowd assembled on Central Park’s Great Lawn to “party New York style.”

Then the Philharmonic closed its set with its first-ever collaboration with Jennifer Hudson — winner of honors including Academy and Grammy Awards and the star of the new Aretha Franklin biopic — who rather than singing Aretha’s famous ,”Respect,” thrilled the audience (and the orchestra) by singing an opera aria, Nessun dorma from Puccini’s Turandot, which the Queen of Soul herself once sang on the Grammys. (Did not see that coming).

Then began a stunning parade of legendary performers presenting a full spectrum of musical genres and tastes. That was intentional, said producer Clive Davis.

Barry Manilow had just sat at the piano, about to begin “I Made It Through the Rain” around 7:30 pm when an announcer cut in, telling the crowd to leave the park immediately due to impending dangerous weather.

That left headliners Bruce Springsteen, Paul Simon and The Killers among the performers cut off.

But a light rain quickly turned into a downpour that flooded city streets, and there was thunder and lightning and one could only imagine what would have happened if they did not begin moving people out when they did.

“While it’s disappointing that tonight’s concert had to end early, the safety of everyone in attendance had to come first,” Mayor Bill DeBlasio tweeted. “To everyone who came out tonight: thank you. Thank you for showing the world that New York City is coming back stronger than ever before.”

New York City’s biggest cheerleaders, US Senator Chuck Schumer, NYC Mayor Bill De Blasio and Stephen Colbert also addressed the crowd with an upbeat message of New Yorkers having come through one of its worst crises and looking to a brighter future.

Concern that the celebration might be premature given the resurgence of the Delta variant and breakthrough infections among vaccinated was set aside, at least for the evening, as the music got underway.

The concert was for the most part free (plus Ticketmaster fees), but people could pay for VIP packages (with premium location, VIP entrance, private restrooms, concessions with specialty food and drink options) and premium seating, and as the concert got underway, there were rumors of tickets going for as much as $5000.

The Central Park concert was the climax to a week of free concerts in the boroughs: The free concerts, livestreamed by Behind The Rhyme on Twitch, were held: 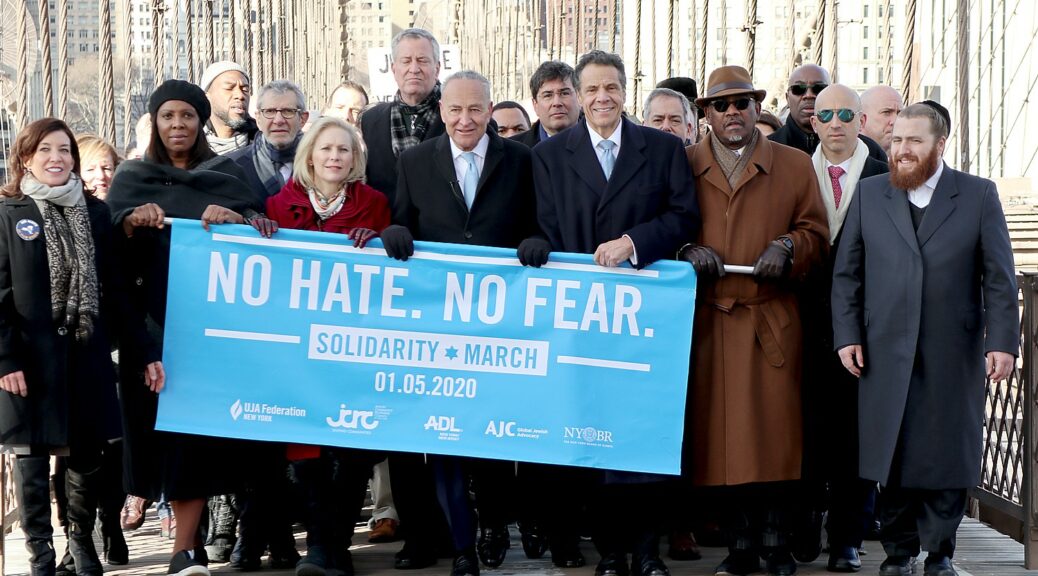 It took more than 2 ½ hours before all the marchers standing against Anti-Semitism, racism and bigotry got across the Brooklyn Bridge from Foley Square – an estimated 25,000 marching behind Senators Charles Schumer and Kirsten Gillibrand, Governor Andrew Cuomo, Mayor Bill DeBlasio, and a slew of state and local leaders, marching in solidarity with Michael Miller, Executive VP & CEO of Jewish Community Relations Council of New York, Eric Goldstein, CEO of  UJA Federation of NY, the Anti-Defamation League, American Jewish Congress, NY Board of Rabbis, and faith leaders across Brooklyn Bridge, with a singular message: “No Fear, No Hate”.

The political leaders did not just come to give speeches and march, but to take action.

“America has a culture of diversity and tolerance. Anti-Semitism and bigotry is a national crisis…We will not stand for bigotry of any type,” Schumer said. “We will not only speak and march, but act.”

Governor Cuomo also announced $45 million in additional funding to protect New York’s religious-based institutions, including parochial and private schools and cultural centers. He said that there would be increased state police patrols in Orthodox Jewish neighborhoods across the state, and has created a new state police tip line for people to report incidents (1-877-NO-HATE-NY). Also, Cuomo said he would introduce legislation to elevate hate crimes to the level of domestic terrorism, and prosecuted as such.

Funding is being made available through Requests for Applications under New York’s Securing Communities Against Hate Crimes Grant Program. Created by Governor Cuomo in 2017, the program provides funding to strengthen security measures and prevent hate crimes against non-profit day care centers, community centers, cultural museums, day camps andnon-public schools,which may be vulnerable because of their ideology, beliefs or mission. Since the program’s inception, more than 500 such projects have been supported by $25 million in state funding. The Governor also announced the creation of a new tip line that New Yorkers should call if they experience bias or discrimination – 1-877-NO-HATE-NY. Additionally, the Governor announced that State Police will continue increased patrols and security in Orthodox Jewish neighborhoods across the state.

“The recent rash of anti-Semitic and other hate-fueled attacks in New York and across the nation are understandably causing anxiety, but we will not be intimidated,” Governor Cuomo said.”In New York we stand up to those who try to sow division and fear, and this new funding will provide religious and cultural institutions the support they need to help protect themselves and keep people safe. We will not let the cancer of hate and intolerance weaken us – we will continue to stand up and denounce it every time it rears its ugly head.”

Hate crime statistics indicate a surge of anti-Semitism and hate crimes against the Jewish community, nationally and in New York. Nearly half of all hate crimes in New York over the last several years have been against the Jewish community. Last year, more than half the hate crimes recorded in New York City, 229 (a modern city record, up from 185 in 2018) were recorded against Jews – and these statistics do not include hate crimes directed at Jews outside the five-boroughs, such as the the slashing of five people attending a Chanukah service in a rabbi’s home in Monsey, NY. The October 27, 2018 mass shooting at the Tree of Life Synagogue in Pittsburgh and the recent terror attack at a kosher market in Jersey City, New Jersey, in which a local Yeshiva and Catholic school faced gunfire, underscore the need to protect Jewish institutions from violent extremism and anti-Semitism.

The grants, which will be directed by the New York State Division of the Budget, provide up to $50,000 in funding for additional security training, cameras, door-hardening, improved lighting, state-of-the-art technology and other related security upgrades at each eligible facility. Organizations that operate more than one facility have the opportunity to submit up to five applications.

The program provides funding to strengthen security measures and prevent hate crimes against non-profit day care centers, community centers, cultural museums, day camps andnon-public schools,which may be vulnerable because of their ideology, beliefs or mission. Since the program’s inception, in 2017, more than 500 such projects have been supported by $25 million in state funding.

The Governor also announced the creation of a new tip line that New Yorkers should call if they experience bias or discrimination – 1-877-NO-HATE-NY. Additionally, the Governor announced that State Police will continue increased patrols and security in Orthodox Jewish neighborhoods across the state.

“I’m heartened to see this amazing show of support and solidarity,” the Governor said at a press conference before the march. “Literally over 10,000 people have shown up to show support and love for the Jewish community. And that’s New York at her best. And it’s fitting. Because what has happened in Brooklyn, what has happened in Monsey, New York was an attack on every New Yorker. And every New Yorker has felt the pain. Discrimination, racism, anti-Semitism is repugnant to every value that every New Yorker’s holds dear. And it’s repugnant to every value that this country represents. Racism and anti-Semitism is anti-American and we have to remember that.

“It is ignorant of our history because to know the history of the Jewish community is to love and appreciate the Jewish community because New York would not be New Yorker without the Jewish community. It is intolerant of who we are as a people. It’s intolerant of our diversity and our humanity and it is also illegal. And while we’re here today in the spirit of solidarity and love, government must do more than just offer thoughts and prayers, government must act. This is illegal and it is government’s responsibility to protect the people of the State of New York and the State government will be doing just that. As soon as the Legislature comes back I’m going to propose a new law for the State of New York that calls this hate what it is – it is domestic terrorism. These are terrorists and they should be punished as such. We’re going to increase the State Police force and the Hate Crimes Task Force so we have more State Police in vulnerable communities.

“We are going to work with schools all across the state to make sure our young people are educated on our history and our diversity and the strength of that diversity. We’ll be working with faith leaders, because from every pulpit, every podium to every congregation in this state, we have to be condemning these acts.

“And today the state is going to make an additional $45 million available to non-public schools and religious institutions for security. We also ask every New Yorker to be involved in this crusade today. And if any New Yorker has any information about a possible attack or an attack that has happened, we ask them to be active and to help us thwart these attacks. We have a 1-800 number – 1-877-NO-HATE-NY. If you have any information, we have that tip line open, let’s all stand together and united.

“These acts of hate may not have started in New York – we’ve seen them across the nation – but these acts of hate must stop and end in the State of New York, and that’s New York at her best. Everyone today says the same thing: No hate in our state, period. We won’t tolerate it, we condemn it, we stand united against it and we are going to act against it. Let’s march.”

Here are more photo highlights from the Solidarity March: