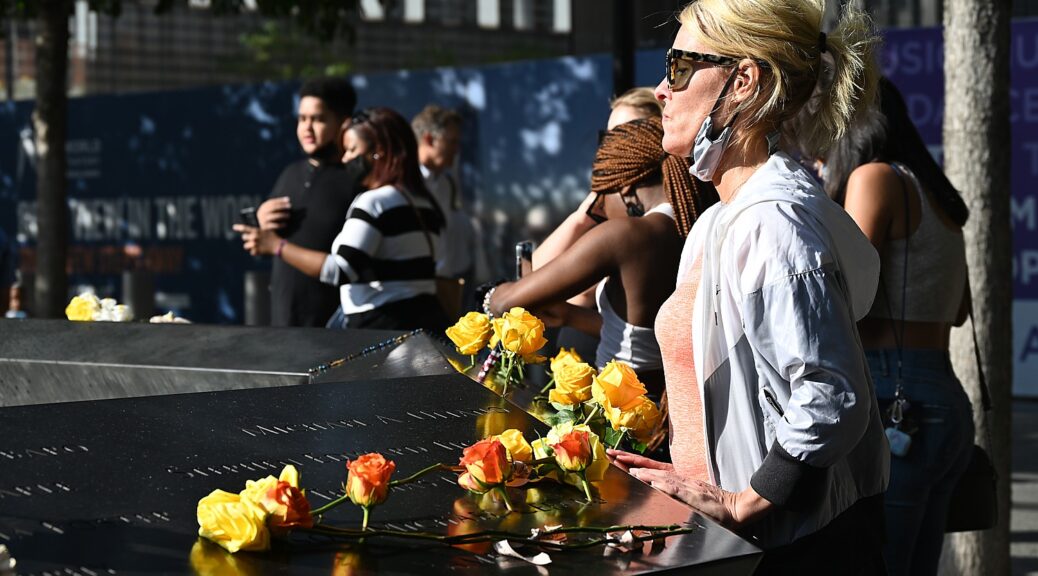 David Goldberg was working as a police officer in Norfolk, Virginia when he saw the attack on the World Trade Center. He immediately decided to come up to New York City to help. He organized 40 volunteers to come. His chief tried to discourage them, forcing them to use their vacation time.

“There was no way I wasn’t coming,” he said during a visit to the 9/11 Memorial, built in the footprint of the Twin Towers. Goldberg’s father was from Brooklyn.

He came with fellow Norfolk police officer Miles Warren, who grew up in New York. “My first job was at Nathan’s in Flushing.” He graduated Great Neck South High School.  He wasn’t going to be dissuaded from coming to help New York, either.

Both now retired – Warren said he was forced out four months shy of his 25 years because he suffers from some health issues that originated from his time working search and rescue on the pile – it was Warren’s first time visiting the Memorial, though not back to New York to visit family.

“I couldn’t come back before. It was too emotional,” he said. Warren, who shows his 9/11 tattoo, said he got goosebumps when he first saw the Memorial.

When they came, they were part of Search & Rescue, working directly on the pile. “For the first few days we had no PPE,” said Goldberg, who suffered a broken nose from a steel bar. “We worked around the clock.”

They did whatever they were asked – guarding the Armory, backing up the NYPD, patrolling. They came three times to New York.

“This was proudest moment of my entire police career,” said Goldberg, who brought his 27-year old son, Yosef, visiting New York for the first time. “All the crimes I solved, to this day, this was the proudest. No way I would never not done this.”

In another area of the memorial, a large group of American Airlines pilots and flight attendants were paying homage to those lost on American Flight 11 which hit the North Tower, killing 87 onboard, United Flight 175 which hit the South Tower, which killed 60 onboard,  American Flight 77 which hit the Pentagon, killing 75 onboard and United Flight 93, in which passengers wrestled control from the hijackers, and crashed the plane, bound for Washington DC and very likely the Capitol, in a field in Shanksville, PA, killing 40 onboard.

The airline people assembled were working on that fateful day, September 11, 2001, and felt a deep personal connection.

They were but a few of the thousands who came to pay homage to those lost on the eve of the 20th anniversary of the September 11th terror attack, the largest terror attack on United States soil in history. It triggered a profound change in American society and created a new trajectory for history.

What impresses you most about the names carved into the black metal of the Memorial is the diversity. Not just the fact that people who died came from 90 countries, but the diversity that is New York City, with family names that come from all over the world, reminding that the United States is a nation of immigrants. Some 60 Muslims died in the Towers.