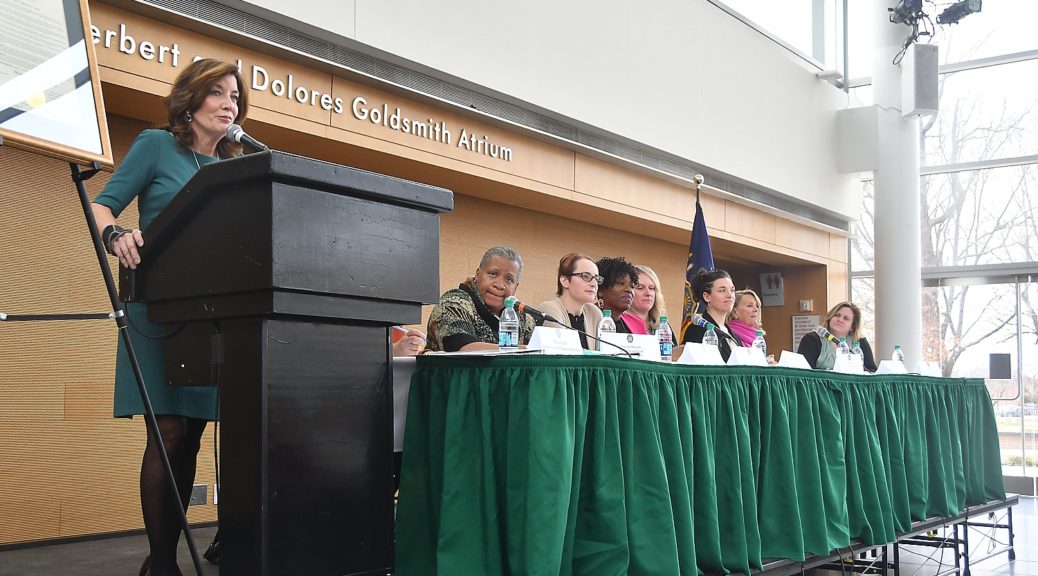 New York State, the birthplace of women’s rights, is pushing for a second round of legislation to address persistent and institutional gender inequity. The state legislature needs to hear from advocates before the April 1 budget deadline.

It is laudable that these initiatives – in categories of Health, Safety, Workplace, Girls, and Family being forcefully advanced by Governor Cuomo – came after months of information gathering, listening tours, and the formation of regional Women’s Councils, coordinated by the governor’s Director of Women’s Affairs, Kelli Owens. Just having such a position is notable.

As Lieutenant Governor Kathy Hochul, a singular champion of women’s rights in New York State, said in her remarks that opened the Council on Women and Girls Regional Forum at Long Island University on March 1, “The genesis for the Council of Women and Girls came because of Washington – on the day the president said ‘We don’t need to be concerned’ and abolished the [Obama-era] Commission on Women and Girls, our governor, as in so many cases [climate action, environmental protection, gun control], stepped up to fill void created by Washington.”

Trump has moved aggressively to roll back gains women have made: restoring being a woman as a “pre-condition” for medical insurance, overturning the mandate that insurance companies provide contraception without co-pays, attacking Title X funding for health clinics including Planned Parenthood, advocating for legislation to curtail access to abortion.

Unless Congress takes action, the Violence Against Women Act will run out of funding in September. This landmark piece of legislation is a life-saver. Since its original passage, domestic violence cases are down by more than 65% nationally. If Congress’ “action” on reauthorizing CHIP is an indication, the Republican-controlled Congress will likely let this lapse as well, even as they cut billions of dollars for programs that directly affect women and families.

New York State – which Cuomo never fails to point out has been a progressive leader for the nation, a status he has worked to reclaim – has made some important gains during his administration, including aggressively pushing for economic development opportunities for Minority & Women-owned Enterprises, for wider access to pre-K programs, gun control, access to health care and guarantee for women’s reproductive rights.

In this second round of legislation and policies – notably several of which need to be adopted by the State Legislature before the April 1 deadline for adopting the budget – he is going after sexual harassment, pay equity, domestic violence, expanding access to child care, educational opportunities, job training and business investment.

New York has been celebrating the centennial of Women’s Suffrage since 1917, the year the state on its own gave women the right to vote, three years before the nation adopted the 19th Amendment.

But despite New York’s progressive policies, New York women still earn less than men for the same work: white women 89c, African American 66c, Hispanic women 54 c in New York, “and we’re the good state, where people are better off. Does that not tell you we have a long way to go?” Hochul said.

“We are convening forums around the state, to drill down why this is happening – part is institutional, cultural, part is that women don’t have childcare but want to continue on a career track, have talent, brilliance, but are primarily responsible for making sure kids are okay and there is not enough child care.” Also parental leave, not just for a newborn or adoption, but when a child or parent gets sick.

“You should be proud your state recognizes this challenge – we now have the most generous paid family leave policy – to relieve the stress of possibly losing a job when you are home with a new baby.”

“It’s about economic empowerment: getting more girls into STEM education and careers. It’s about safety and security – domestic violence” – something that has been crystallized in the Trump White House, notably with the tolerance of a credibly accused wife-beater as Trump’s secretary.

Workplace: combat sexual harassment in the workplace; call on NYS Common Retirement Fund to invest in companies with women and minority leadership; reauthorize the State’s Minority and Women-owned Business Enterprise Program; close the gender wage gap; support women returning to or advancing in the workforce with job training and placement services; invest $20 million in Women-Owned Businesses;  encourage more use of flexible work schedules.

Girls: expand access to computer science and engineering (STEM); launch “If You Can See It You Can Be It,” a day for girls to see what is possible; create K-12 learning module on healthy relationships; legislation requiring school districts to provide free menstrual products, in restrooms, for girls in grades 6 through 12.

“All these areas converge,” Colleen Merlo, Executive Director, Long Island Against Domestic Violence, said. “Gender equality cannot be achieved unless we address all these buckets….We see that women lose time at work because of domestic violence, so if we don’t create safety at home, they are losing time at work, so are not advancing, not getting equal pay or promotion – all are interconnected with safety.”

It’s also about making it easier to vote, adding early voting (which NYS doesn’t yet have), so women who work and care for children aren’t shut out of casting a ballot – part of Cuomo’s “Democracy Agenda.”

“The torch has now been passed to us,” Hochul stated. “Our job is not just to pass it along, but to make sure it glows even brighter, so we look back 100 years from now, and can say, yes, we made a difference in lives in a profound way, that we spoke up for people without voices.”

What to do? First: contact state representatives to urge them to vote on the budget and legislation bolstering the Women’s Agenda. Planned Parenthood of Nassau County, among others, is mounting a lobbying day in Albany on March 13, to join Cecile Richards, President of the Planned Parenthood Action Fund, and more than 1,000 activists from across New York State, to advocate for pro-reproductive health legislation.