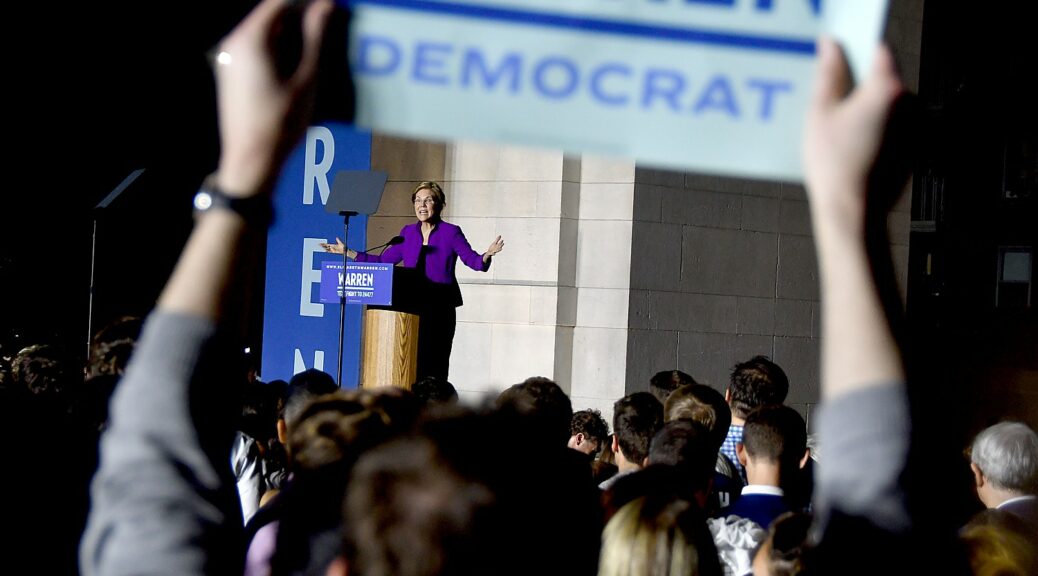 Senator Elizabeth Warren, running to be the Democratic candidate for president, began and ended her speech before some 20,000 gathered at Washington Square Park in New York City relating the history of the Triangle Shirtwaist Factory fire of 1911 which took place mere blocks from the Arch that took the lives of 146 Jewish and Italian immigrant women and girls – still one of the largest industrial accidents in US history. She spoke of Francis Perkins, who ran from a townhouse just behind where Warren stood. Perkins was already an activist for workers’ rights and won fire safety regulations, “but didn’t stop there,” and other worker protections.

Even before women got the right to vote, Perkins became a political adviser on workers rights and became the first woman Cabinet secretary, Secretary of Labor, under FDR.

Perkins, Warren said, worked from within, while thousands of women in the trade union movement, worked from outside – 500,000 marched in a funeral procession up Fifth Avenue for the 146.

Speaking from a podium built of wood from the Frances Perkins homestead in Newcastle, Maine, obtained from her grandson, Tomlin Perkins Coggeshall, Warren used the story to prove her point of what can happen through grassroots action, that big bold things – such as what she is proposing to make fundamental, systemic change. “Don’t be afraid…” she declared – a not-so-subtle shout out to the Democrats who, desperate to see Trump voted out of office, are looking for a candidate they believe has the best chance of winning the general election, which for many means someone who won’t rock the boat too much, rather than someone whose ideas and proposals excite, engage and promote real structural change.

There were cheers throughout her speech delivered by a crowd that the campaign estimated at 20,000 (Warren’s biggest to date) but especially as she said, “Medicare for All,” and then, at the phrase, “wealth tax,” chants of 2c, 2c, 2c rose up.

Warren, who had just been endorsed by the National Working Families Party,  said that the 2c on every dollar after the first $50 million in wealth, would correct historic, systemic, and “government sanctioned” racism and sexism that produced gaps in income and also political power – redlining in housing, the pay gap between women and men, particularly women of color, criminal justice reform, eliminating private prisons that incentive locking people up, eliminating student debt, providing universal pre-K. Without using the word “reparations” – she offered a more constructive, implementable series of programs that would accomplish the same goal of equalizing the opportunity to succeed.

“The time to hold back is over. We need structural change.”

Warren added, “I know what you are thinking – it is too much, too big, too hard.” Then, scanning the crowd, she joked, “OK, nobody here. I know this change is possible because others have made big structural change before.”

And she went back to Perkins and the Triangle Shirtwaist Factory – how factory owners, made filthy rich because of the horrendous working conditions and wages were able to amass the wealth to buy politicians, how greed by owners and corruption by politicians effectively negated democracy.

“30 years old, Francis Perkins already was a human rights activist…how, seeing the fire at the factory, she ran and watched as young women leaped to their death rather than be consumed by the flames.  500,000 at that march. It wasn’t the first march, but it was different.”

“While they picketed from the outside, Francis pushed from the inside. Those women died because of the greed of business owners and the corruption of politicians. Perkins was the lead investigator, years before women could vote, let alone have a role in government. But Frances had a” plan – she fought for fire safety, but she didn’t stop there.

“With Francis working from the inside and the women workers applying pressure from the outside, they rewrote state labor laws top to bottom to protect workers. She became the leading expert on working conditions.” President Franklin D. Roosevelt named her his Labor Secretary through the New Deal.

“That what one woman can do.” She added, “It’s what’s possible when we fight together.”

Warren declared, “No matter what brings you into this fight — whether it’s child care, student loans, health care, immigration, or criminal justice, one thing is crystal clear: corruption is making it worse — and it’s at the root of the major problems we face as a democracy.

“Reforming the money game in Washington isn’t enough. We also need to comprehensively clean up our campaign finance system. That’s why I’ve also called for a constitutional amendment to overturn Citizens United. It’s why we need to get rid of the Super PACs and secret spending by billionaires and giant corporations that try to buy our democracy. It’s why we need to br”eak the grip that big donors have by creating a system of exclusive public funding of our elections. But even if we solve our campaign finance problems, comprehensive anti-corruption reforms targeted at Washington itself are necessary to finally end the stranglehold that the wealthy and the well-connected have over our government’s decision-making processes.

“I believe that we can root out corruption in Washington. I believe we must make big, structural changes that will once again restore our trust in government by showing that it can work for all of us. And when I’m President, that’s exactly what I’ll do.”

Warren, famous now for posing for selfies with people who come out to see her, wound up staying until midnight before the line, thousands long, was through. “I stayed four hours, but so did the last guy on line,” she later said. It is an indication of the enthusiasm for her and her endurance as a candidate at a time when a big issue among Democrats is who can get out the vote.

One thought on “Warren Tells Crowd of 20,000 in Washington Square Park ‘We can root out corruption in Washington’”