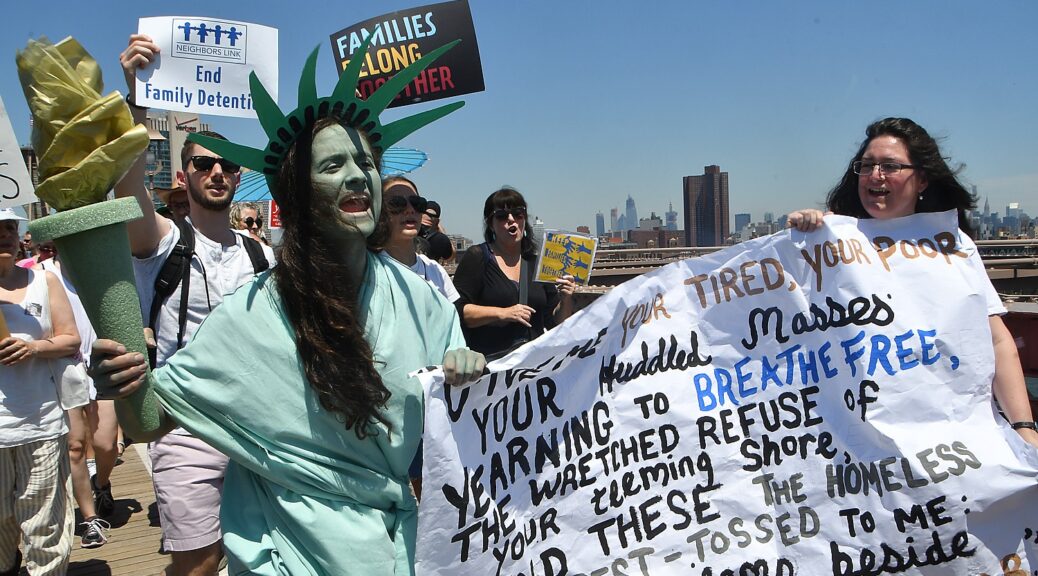 On World Refugee Day, Vice President Joe Biden, the presumptive Democratic candidate for president, issued this statement attacking the “fear-mongering, xenophobia and racism” as the “unabashed tenets of Trump’s refugee and immigration policy, and promised to “recommit to building a more inclusive and welcoming America. That’s how we will restore the soul of our nation.”

Here is his statement:

World Refugee Day is the time when all nations recognize the humanity and resilience of the millions of people forced from their homes by persecution, war, and violence and renew our commitment to protect the most vulnerable. The United States has always strived to serve as a beacon of hope — a role model in resettling refugees and leading the humanitarian response abroad. But today is also a bitter reminder of how Donald Trump has tried to change America from a nation of refuge and liberty to one of division and intolerance.

Fear-mongering, xenophobia, and racism are the unabashed tenets of Trump’s refugee and immigration policy, and his divisive, dangerous, and undemocratic response to Black Lives Matter is a reminder of this administration’s devaluation of Black, Brown, and other minority communities not only in the United States, but around the world. But we will not, and we cannot, allow hate and rage to divide us further. Decades ago, giants of the civil rights movement like Bayard Rustin recognized the universal fight for freedom and safety and urged the United States to accept more refugees. Their call is even more urgent today as the number of those forcibly displaced worldwide reaches nearly 80 million people worldwide — roughly 1 percent of humanity.

Donald Trump has made clear that he does not believe our country should be a place of refuge. He has slashed refugee admissions by more than 80 percent and, just this past week, released an immoral and likely unlawful rule that makes it nearly impossible for most asylum-seekers to qualify for protection in the United States . He has cruelly separated thousands of children from their parents, sought to prevent victims of gang and domestic violence from receiving asylum, and severely limited the ability of members of the LGBTQ+ community, an especially vulnerable group in many parts of the world, from qualifying for asylum.

And he has turned his back on the men and women who served honorably alongside our soldiers, diplomats, and aid workers in Iraq and Afghanistan as interpreters and guides, and now find that their lives, and the lives of their families, are threatened for this service. This cannot stand. As one of the co-sponsors of the 1980 Refugee Act, I believe that resettling refugees helps reunite families, enriches the fabric of America, and enhances our standing, influence, and security in the world. Right now, many refugees are also working on the frontlines of the pandemic response, as nursing aides, doctors, meatpackers, and grocery clerks, among other essential workers.

Restoring America’s historic role as leader in resettlement and defending the rights of refugees everywhere will take concrete action.

As President, I will increase the number of refugees we welcome into this country, setting an annual global refugee target of 125,000 — up from a ceiling of 18,000 under Trump — and will seek to further raise it over time commensurate with our responsibility, our values, and the unprecedented global need.

I will support efforts to work with Congress in a bipartisan fashion to protect our refugee policy from drastic and arbitrary reductions we have seen during the Trump Administration and establish a minimum admissions number of at least 95,000 refugees annually.

I will pursue policies that increase opportunities for faith and local communities to sponsor refugee resettlement.

I will make more channels, such as higher education visas, available to those seeking safety. I will repeal the Muslim ban — and other discriminatory bans based on ethnicity and nationality — and restore asylum laws, including ending the horrific practice of separating families at our border.

I will work with our allies and partners to stand against China’s assault on Hong Kong’s freedoms and mass detention and repression of Uighurs and other ethnic minorities and support a pathway for those persecuted to find safe haven in the United States and other nations.

I also recognize that it is not enough to simply reverse or dismantle the heartless policies of the Trump Administration. We need to look for ways to do better. On this World Refugee Day, we all must stand together and recommit to building a more inclusive and welcoming America. That’s how we will restore the soul of our nation.