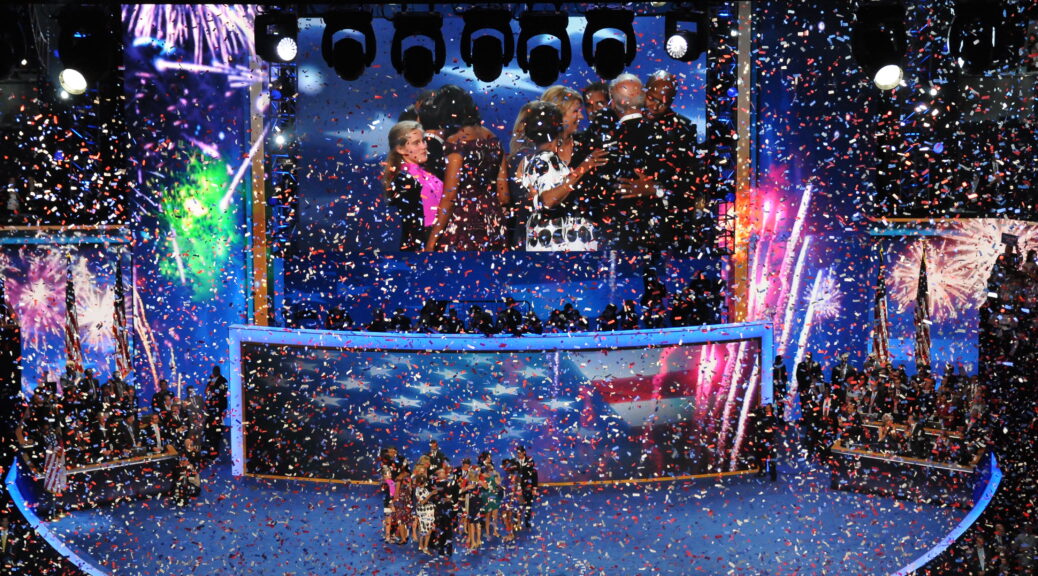 MILWAUKEE—The Democratic National Convention Committee (DNCC) announced the themes that will guide each of the four nights of convention programming, which will take place August 17-20, from 9 to 11 pm,. The themes are intended to show how Vice President Joe Biden, the presumptive Democratic nominee for president, intends to bring the country together around, to lead the nation of Trump’s chaos and crises, and rebuild a better America for all.  In look and feel, the 2020 Democratic National Convention, which will be conducted virtually instead of as an in-person gathering, will be different. More innovative, more creative—and engage with more Americans than ever before. “Uniting America” will serve as the primary theme for the four nights of programming.

Having made the decision for a virtual convention instead of in-person gathering, a custom virtual video control room has been designed to take in hundreds of feeds from around the country, including the potential of interacting with Americans from around the country. As in past conventions, a feed of convention proceedings will be available at no cost for media and accessible in multiple formats, including via satellite and embeddable livestream.

“The Democrats’ convention stage is bigger this year than it ever was—located in cities and towns across America,” the DNC stated. “This year, we’ll see fewer people behind podiums—and more people in living rooms, on factory floors, at small businesses, and in schools and town squares. No one will need a floor pass to experience the biggest moments up close, and we’ll hear from the everyday Americans that represent our nation’s strength, decency and humanity.”

“This convention is for all Americans, no matter who you voted for in the past. We will unite America around the critical task of electing Joe Biden as president in November so we can begin to build a more just, more democratic, kinder and stronger country—a better America,” said Stephanie Cutter, 2020 Democratic National Convention Program Executive. “The message we aim to deliver is simple: Joe Biden is the steady, compassionate and experienced leader America needs right now to bring us together and steer our nation out of Trump’s crises and constant chaos and build a better future for all.”

The convention will take place over four nights from August 17-20, 2020 and will air live from 9:00-11:00 PM Eastern each night. Over the course of those four nights, programming centered around the following thematics will aim to unite Americans from coast-to-coast around Joe Biden’s vision to build a better future for all.

Monday, August 17: We the People—This convention is about Americans rising up to take our country back—and move forward as a nation together. As we have learned throughout our history, when we stand united, we can overcome anything, including the monumental challenges we face today. With Joe Biden as president, ‘we the people’ will mean all the people.

Tuesday, August 18: Leadership Matters—A moment like now demands real leadership. A leader who has the experience and character to meet the moment. A leader who will unite us, tell us the truth, take responsibility, listen to experts and be an example for the nation. Strong people and strong countries rise up during crises, don’t shy away from what is tough, and lead with competence. With Joe Biden as our president, we will restore honesty and integrity to our government, and stake out a renewed leadership role in the world. And we will create more justice, more fairness and more equality for all.

Wednesday, August 19: A More Perfect Union—We are not going back to where we were before Donald Trump’s economy and mishandling of the pandemic—for too many Americans, that wasn’t good enough. As president, Joe Biden will lead us to a better America we know is possible. As he leads us out of Trump’s chaos and crises, he will help America build back better.

Thursday, August 20: America’s Promise—The measure of a president is the same as the measure of a person: What principles guide them? How do they handle adversity? Being president doesn’t change who you are, it reveals who you are. Joe Biden is a good man who believes in the promise of America, and as president, he will deliver on that promise for all.

After ongoing consultation with public health officials and experts—who underscored the worsening coronavirus pandemic—the Democratic National Convention Committee decided that speakers for the 2020 Democratic National Convention would not travel to Milwaukee, Wisconsin in order to prevent risking the health of the host community as well as the convention’s production teams, security officials, community partners, media and others necessary to orchestrate the event.

In accordance with this guidance, Vice President Joe Biden will no longer travel to Milwaukee and will instead address the nation and accept the Democratic nomination from his home state of Delaware. Details about the location of the speech will be released at a later time. Other speakers who had been planning to come to Milwaukee will not travel to the city.

“From the very beginning of this pandemic, we put the health and safety of the American people first. We followed the science, listened to doctors and public health experts, and we continued making adjustments to our plans in order to protect lives. That’s the kind of steady and responsible leadership America deserves. And that’s the leadership Joe Biden will bring to the White House,” said DNC Chair Tom Perez.

Democrats have been working for months to build flexible plans that modernize and transform the convention experience for delegates and viewers across the country.  From the start of the pandemic, contingencies were put in place for a successful convention that would ensure public health was protected. Today’s announcement represents a small adjustment to the overall planning, as the majority of speeches and segments were already taking place in locations across the country. Democrats will offer four nights of programming, which will include a mix of both pre-recorded segments and live broadcasts from locations across the country.

“2020 will always be remembered as a year of once-in-a-lifetime challenges and changes—but it will also be remembered as a time when Americans were their most compassionate and resilient selves. While we wish we could move forward with welcoming the world to beautiful Milwaukee in two weeks, we recognize protecting the health of our host community and everyone involved with this convention must be paramount,” said Joe Solmonese, CEO of the 2020 Democratic National Convention.

“This convention will look different than any previous convention in history.  It will reach more people than ever before, and truly be a convention across America for all Americans, regardless of which party you belong to or who you’ve voted for in previous elections. This “unconventional” convention will launch Joe Biden to victory in November,” Solmonese added.

In order to ensure that the convention will reach viewers wherever they are, convention officials have been working with partners to house convention content on over a dozen platforms, in addition to traditional broadcasts. The official live stream for the 2020 Democratic Convention will be hosted on DemConvention.com, where viewers can also find the full convention schedule, and a digital tool kit to get involved.

How to Watch the 2020 Democratic National Convention

Viewers will have more than a dozen options for watching the 2020 Democratic National Convention, ensuring that this year’s convention will reach viewers where they are, however they prefer to watch, all across the nation.

With an unprecedented number of ways to tune in, this year’s convention will engage voters in new, innovative ways and unite the country around our shared values. The convention will take place over four nights from August 17-20, 2020. Convention programming will air live from 9:00-11:00 PM Eastern each night.

The official live stream for the 2020 Democratic National Convention will be hosted on DemConvention.com, where viewers can also find the full convention schedule, a digital toolkit to get involved, more resources for viewers, delegates and the media and additional plans and details.

“While our convention will certainly look different than previous years, what hasn’t changed is that this is an opportunity to engage and unite more Americans than ever before and to launch Joe Biden to victory this fall,” said Solmonese.  “With so many different ways to watch and get involved this year, Democrats are ready to make the case for Joe Biden’s vision for a better, safer future for the country.”

In addition to the DemConvention.com livestream and traditional broadcasts, the DNCC is working with partners to house convention content on a range of platforms, ensuring that no matter what services and devices audiences are using, the full program is available live and on-demand.